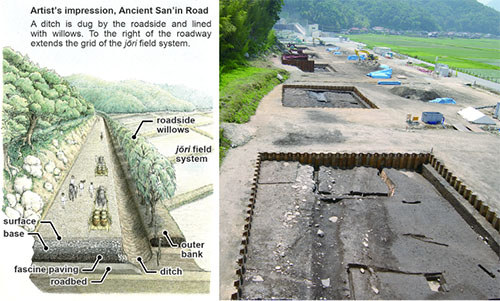 Road feature thought to be the Ancient San’in Road Ascertained over a length of 300 m. As the excavation areas enclosed within the sheet pile retaining walls are places for piers to support an expressway (the Tottori West Road), the routes of ancient and modern highways thus overlap. Artitst’s impression adapted from Hakkutsu sareta Nihon rettō 2019 [Excavations in the Japanese Archipelago, 2019] (Bunkachō [Agency for Cultural Affairs], ed., Kyodo News, 2019). 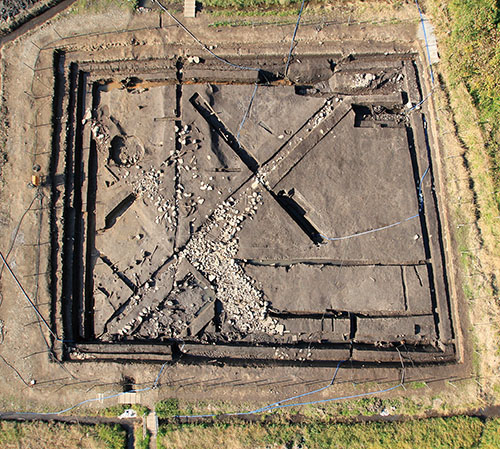 Jōri field system feature A portion at a point of intersection on a square grid, 1 chō (109 m) on a side. Stones are spread atop strips of mounded earth 3–4 m in width. 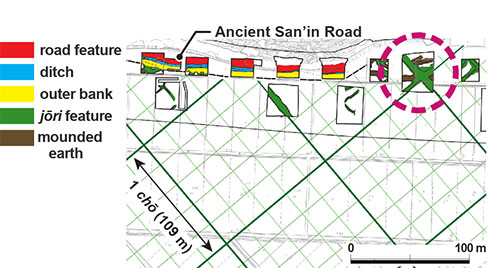 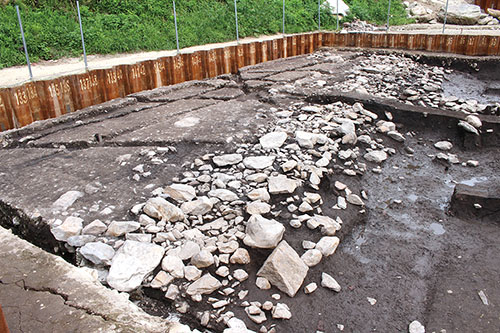 Roadway repair A repair was made by packing stones onto the road shoulder where it had collapsed. Evidence was found of large-scale replacement extending from the base of the road to the earth piled as the surface during repair work in the latter half of the eighth century. 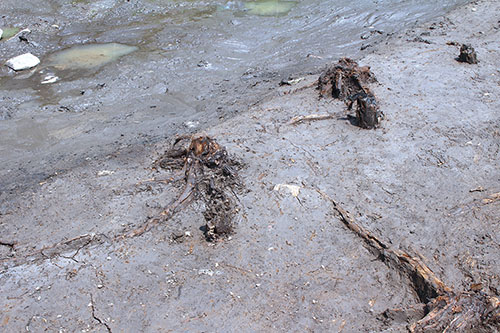 Roadside willows The roots of 24 trees were ascertained. They were lined up in one or two rows following the row of stakes driven into the shoulder of the ditch. The distances between planted items ranged approximately 0.3–1.2 m, and the length of the planted belt is inferred as 60–100 m. 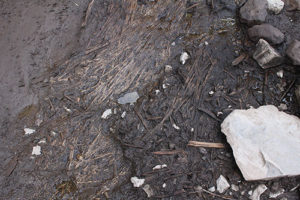 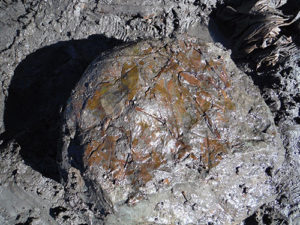 Fascine paving in situ (left) and tree leaves clinging fast to a stone (right) A layer of fine clay is laid down, over which branches with their leaves or other vegetation are spread. Trees such as Japanese plum-yew, Japanese cinnamon, camphor tree, muku tree, and kaya (Japanese nutmeg-yew) were utilized. At the instant they were uncovered, the tree leaves retained their bright green color. 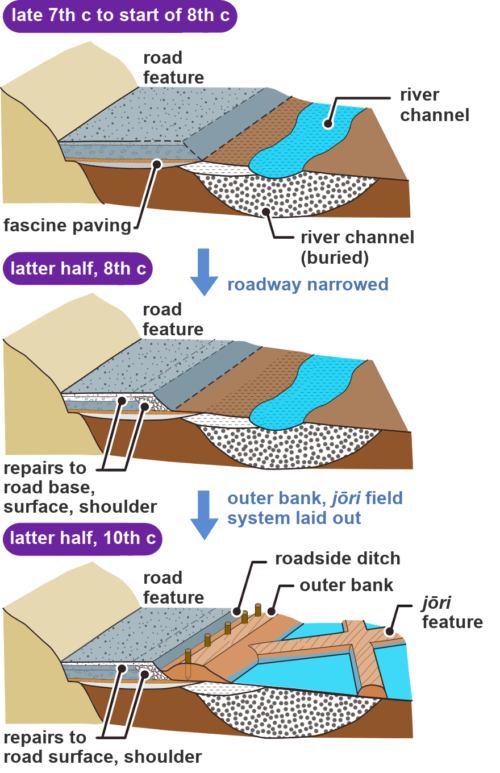 Column: A bit of trivia
What was the Ancient San’in Road?
This was one of the state roads maintained under the ritsuryō system, linking regional provinces to the capital. There were seven such roads: Tōkai, Tōsan, Hokuriku, San’in, San’yō, Nankai, and Saikai. As horses were the means of travel at the time, post stations were set up every 30 li (16 km) where horses could be changed. Figure adapted from Hakkutsu sareta Nihon rettō 2019 [Excavations in the Japanese Archipelago, 2019] (Bunkachō [Agency for Cultural Affairs], ed., Kyodo News, 2019). 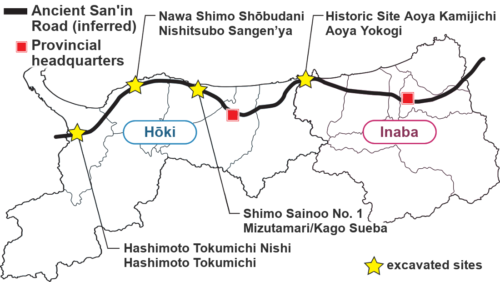 Panel drawing of a “group of female figures”

An Asuka period image ranking next to the Takamatsuzuka tomb find 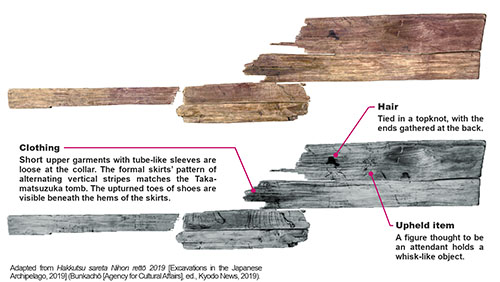 Recovered from the vicinity of the Ancient San’in Road and the jōri field system intersection. At least one hole of about 5 mm was opened near the top, possibly used for passing a string with which the panel was hung. While the composition shares some older aspects with tomb murals of Goguryeo on the one hand, the hair style and clothing are drawn in modes that were popular in Tang China and Asuka period Japan. Length: 70.5 cm; width (inferred): 15.5 cm; thickness: 6 mm. The material is Japanese cedar. No pigments were detected. The use is unclear. (Photo from Nara National Research Institute for Cultural Properties)

Reconstruction of the panel drawing 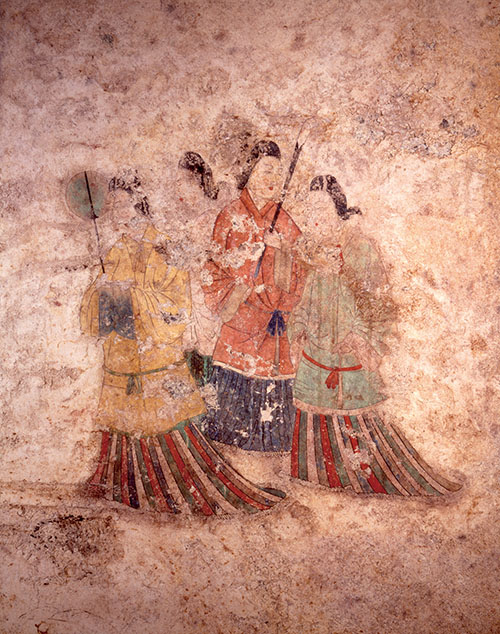 Group of female figures on the western wall, Takamatsuzuka Tomb The depiction of the skirts is similar to that of the panel drawing.

Buddha effigy Characteristic of depictions of the Buddha are the three lines in the neck, and the robe draped to leave the right shoulder bare. The realistic style of drawing is not ordinarily seen in wooden human effigies. Length: 18 cm; width: 3.1 cm. Japanese cedar.

Supplication board A mokkan(wooden document) noting the act of copying 34 volumes of the Heart Sutra on the seventeenth day, third month, twelfth year of the Jōwa era (845). Such items would be hung up over an entrance in prayer for a bountiful harvest or good health. It bears the name of the supplicant. In the tenth century this was reutilized to make tageta, a type of wooden clog worn in wet paddy. Length: 45.7 cm; width: 9.6 cm. Japanese cedar. 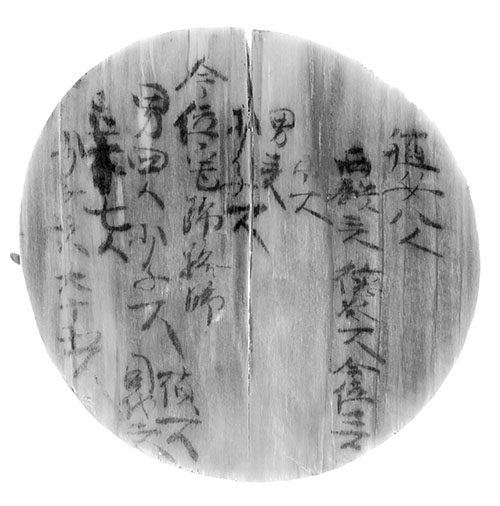 Mokkan related to farm work A mokkan(wooden document) ledger recording the personnel who participated in rice planting. This is a reutilized board from the bottom of a round bentwood tub. The record starts by listing eight persons under the heading shokujo, indicating female farm hands. Diameter: 14 cm. Japanese cedar. (Buddha effigy, supplication board, and farm work mokkan photos from Nara National Research Institute for Cultural Properties) 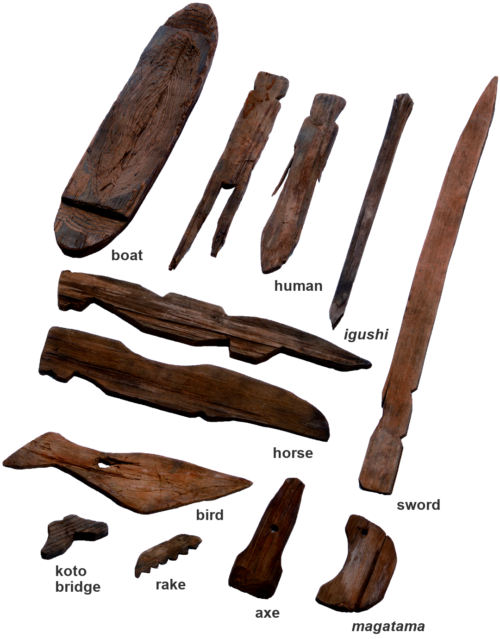 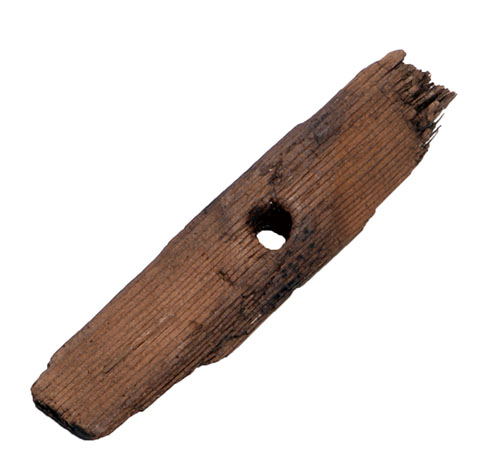 Blade of a wooden helicopter toy Shaped by shaving down the upper and lower surfaces towards a transverse diagonal on each half. The hole for the spindle is about 1 cm in diameter. This is the second oldest recovered example, following the one from Prince Nagaya’s mansion at the Nara capital. Length: 13.3 cm; width: 3 cm; thickness: 1 cm. Japanese cedar. 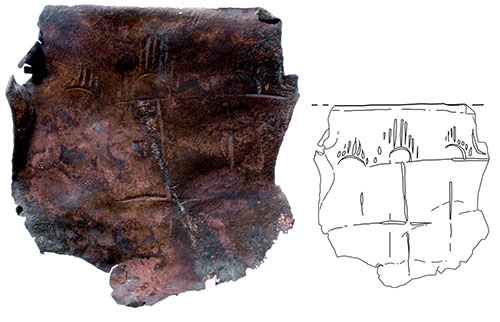 Copper plate Discovered in earth piled from the initial construction of the Ancient San’in Road. A mountain peak pattern, a motif used in Buddhist art, has been hammered out. This may have been part of a repoussé Buddhist relief hung as decoration in a miniature shrine. Surviving length: 4.8 cm; width: 4.6 cm; thickness: 0.5 cm.

The first willow-lined road found in Japan
The Aoya Yokogi site is located on the Aoya plain facing the Japan Sea, in the basin of the lower reaches of Hioki River. The well-known Yayoi period site of Aoya Kamijichi (Historic Site) sits nearby. In excavations conducted from the 2013 to 2015 fiscal years in conjunction with the construction of the Tottori West Road, features thought to be part of the Ancient period San’in Road and a jōri field system, plus embedded-pillar building remains, were found.

The Ancient San’in Road was built up with piled earth, and laid out in a straight line following the base of a hill. The road width was 6–7 m, with a roadside ditch made between the roadway and a mound of earth serving as the outer bank. As the ground was swampy and soft, fascine paving—the civil engineering technique of providing a base layer of tree branches and leaves to strengthen an earthwork—was employed. This was a high-level and advanced method, transmitted from the Korean peninsula, which also improved the drainage of the piled earth.

The road was built from the latter portion of the seventh to the start of the eighth centuries, and while being repaired over and again was maintained for a considerable span of time, until the eleventh century. On an occasion of repair in the latter half of the tenth century, earthworks indicating the jōri system of land division were built in a uniform manner. At the Aoya Kamijichi site as well, features of the Ancient San’in Road were found along with those of a jōri field system, so it is seen that construction of an ancient state road was a grand project on a national scale that was accompanied by development of the surrounding region.

A further point worth noting is that it was a willow-lined highway. Tree roots were found lined up on the outer bank, and from an identification of the species it became clear these were willow trees. It is known from historic records and classic Japanese waka poems that Japanese pagoda trees and willows were planted as roadside trees, and in the Man’yō anthology there is a waka poem by Ōtomo no Yakamochi, who was also governor of ancient Inaba Province, nostalgically recalling the willows of the streets at the capital (Nara). However, this is the first discovery through excavation of roadside trees in Japan, and is an epoch-making find for reconstructing the scenery of ancient roads.

A “group of female figures” showing ancient East Asian cultural exchange
During processing of the wooden objects recovered from the excavation, a “group of female figures” drawn on a wooden panel was discovered in 2016. This drew attention as the second such find domestically of an image of courtly women, following that of the murals at the Takamatsuzuka tomb, now a National Treasure. Like the Takamatsuzuka tomb, the panel drawing was made sometime between the latter portion of the seventh to the start of the eighth centuries, and depicts six females walking gracefully in a line. Their hair is tied up, and they wear short upper garments and vertically striped formal skirts. The figure at far right holds forward an item resembling a hossu (fly whisk), and being depicted smaller than the others, she is thought to be an attendant. Such groups of courtly figures were a composition drawn on the walls of tombs in China and the Korean peninsula. While the drawing on this panel is shrouded in many mysteries, such as who drew it and for what purpose, it is an indispensable source material for considerations not only of ancient Japan, but of cultural exchanges more broadly in East Asia.

Roadside government office facilities and sites of purification
The mokkan (wooden documents) and wooden ritual implements recovered in large volumes also drew attention. The mokkan numbered 81 items and included many topics, relating to taxes on rice fields, tax rice stored in provincial granaries, and government loans to peasants of seed rice, as well as labels indicating varieties of rice, markers for property boundaries, a type of amulet known as a “Somin Shōrai charm,” and so forth. These items suggest that a government office facility was set up somewhere nearby, along the San’in Road in the Ancient period, and perhaps some outpost of the Keta District headquarters of Inaba Province or an auxiliary government granary can be inferred.

Approximately 22,500 wooden ritual implements were recovered, centering on the remains of a river channel alongside the Ancient San’in Road. Based on such materials it is thought that from the latter half of the seventh through the tenth centuries, rites appropriated to the ritsuryō state and focusing on formal ceremonies of purification were conducted on a grand scale at roadside locations along the San’in Road. This can be called a ritual site on the largest scale nationwide, rivaling the Hakaza site group in Hyōgo Prefecture.

Aoya Yokogi is an important site which enables us to approach a true picture of Ancient period regional society from every angle, including the ancient state road and jōri field system, government office facilities, and locales for formal public ceremonies of purification. (Sakamoto Yoshikazu)