Kyoto City, Kyoto Prefecture
Azuchi-Momoyama–start of the Edo periods (end of the sixteenth–start of the seventeenth centuries) 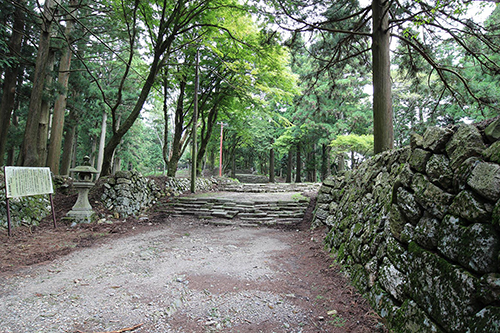 A terrace surviving on the approach path to Atago Shrine  This represents traces of the presence of the five hermitages of Atago and the tea jar storehouse. At terraces from 1645 on, large-scale dry stone walls were built lining the approach path. 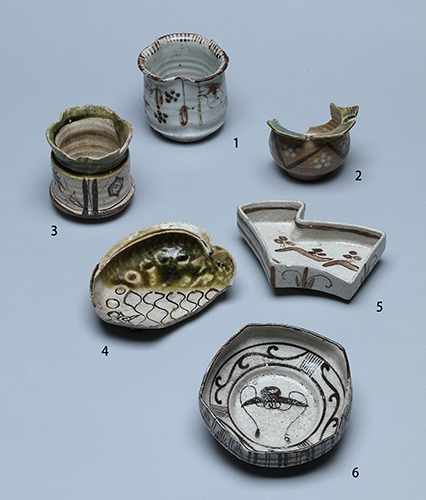 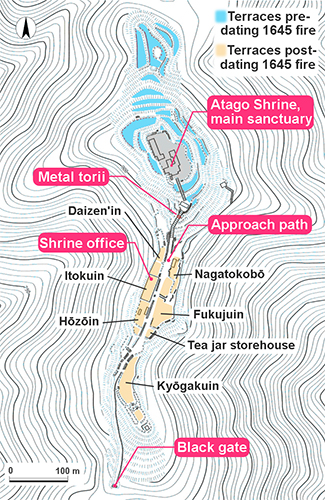 Numerous Momoyama ceramics showing the height of the Atago cult

The five hermitages that greeted pilgrims on the slope

The Atagoyama site consists of the remains of montane forest temples on the slopes of Mount Atago, which rises on the northwest of the Kyoto basin. In an investigation of Medieval fortress sites conducted by Kyoto Prefecture in the 2012 fiscal year, nine artificial terraces thought to have been made from the Heian to the Edo periods were detected. The largest in scale among these is a terrace made at the top of a ridge, 700 m north–south by 100 m east–west, enclosing the Atago Shrine which sits atop the modern-day summit. Dry stone walls line the path approaching the shrine, and traces of earthen ramparts and depressions that were ponds have also been ascertained. From Early Modern  geographic literature, it is known that hermitages called the Atago Gobō (“five hermitages of Atago”) and a storehouse for jars of tea leaves that were to be presented to the Shogunate existed in this area, and it is inferred that these facilities were located on this terrace.

The establishment of the Atago Gobō is said to date from the latter half of the Muromachi period, at which time they are held to have stood on both sides of the stone stairway leading up from the metal torii just below the summit. However, with the rebuilding after the fire that destroyed the entire mountain in 1645, they were relocated to the lowermost level area where the modern shrine office now stands.

In 2018, a large number of Momoyama period ceramics gathered from the steep slope immediately below the summit were entrusted to the city of Kyoto. The collected items were various glazed ceramics from the Azuchi-Momoyama to the start of the Edo periods, with domestic glazed wares making up 80 percent, and including items from various centers of production. Characteristic of the collection is the large number of high-quality items recognized as extremely popular at the time and utilized in the tea ceremony, including Shino Oribe mukōzuke (side dishes), Shino plates, Green Oribe mukōzuke, Narumi Oribe mukōzuke and so forth. Ordinary teacup forms were relatively few among vessel shapes regardless of locus of production, with an abundance of tableware such as plates, bowls, and mukōzuke.

Mount Atago was the object of religious belief from ancient times, and by the Edo period it had evolved as a sacred mountain where the syncretic Buddhist and Shinto deities Atago Gongen Tarōbō (a Tengu figure) and Shōgun Jizō (an avatar of the Bodhisattva Jizō as a general) were worshiped. As daimyo including Mōri Terumoto, Hosokawa Yūsai (Fujitaka), Akechi Mitsuhide, and Shimazu Iehisa visited to offer prayers for continued good fortune in war, it was not just the common people but also samurai, the nobility, wealthy merchants and so forth, people of a various social standing who made multiple pilgrimages to the site. These utensils are thought to have been kept at hermitages on the mountain to entertain persons of high status. The discovery at Mount Atago of an abundance of Momoyama ceramics conveys to us even today the deep belief held by people in the Atago Gongen deity, a protector against fire and a manifestation of a god of war, as well as the prosperity of the Atago cult that spread from here throughout the nation. (Nishimori Masaaki)

Akechi Mitsuhide, the main character of the NHK drama “Awaiting Kirin” (the 2020 version of the historical Taiga Dorama series), is also known to have held a deep belief in the Atago Gongen deity. Starting in 1573, on the occasion of his campaign to capture the province of Tanba which he subsequently held as his domain, he made repeated requests, along with donations of lands and such, to Itokuin, one of the five hermitages of Atago, for prayers for his military victory, from which Mitsuhide’s close relationship with Mount Atago can been discerned.

On the 27th day of the fifth month in 1582, having been ordered to lead his army west to the Chūgoku region to aid Toyotomi Hideyoshi, Mitsuhide instead made a pilgrimage to Mount Atago, where he drew lots (as divination) repeatedly in front of the deity. The following day he hosted a  linked verse session at Itokuin, composing his well-known verse Toki wa ima ame ga shita-shiru Satsuki kana (literally “It is May, a rainy season,” seen as a coded entreaty for his planned coup), and proceeded from there to Honnōji Temple (where the assassination he ordered of Oda Nobunaga was carried out).