Brick feature discovered in the old washroom. The washroom is located on a corner where the old fermentation room and warehouse come together, and until now had been thought of as a facility for washing bottles, based on the name. 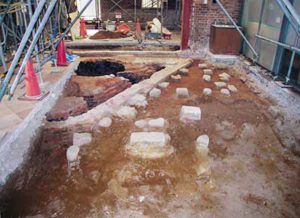 Old office building prior to the Great East Japan Earthquake
The old office building, which received the greatest damage, is currently undergoing reconstruction work, aiming for completion in March 2016.

Distant view of the facilities in Meiji 44 (1911)
The former winery was built on a lot forming part of the vast grounds 120 chō in area (about 25 times the size of the Tokyo Dome) which Kamiya Denbē obtained for the cultivation of grapes. Due north across the central court (the area of the chimney) from the old office building stood the fermentation room, from the western end of which the warehouse was built at a right angle. The old washroom is at the corner made between the fermentation room and warehouse.

Born in the third year of the Ansei era (1856), in Isshiki-chō of the present day city of Nishio, Aichi prefecture, he held an interest in brewing from a young age. When he was 24, he opened the Mikahaya Meishuten (which later became the Kamiya Bar) in Asakusa, and sold Bee Brand Kozan Wine, an imported wine altered to suit the tastes of Japanese. In Meiji 31 (1898), at the age of 42 he moved his base of operations to the city of Ushikushi in Ibaraki prefecture, and started work on the first genuine winery in Japan. He completed the Chateau Kamiya Winery, linking together the process from grape cultivation to wine brewing and bottling, in Meiji 36 (1903).

Unopened bottle of wine
Bee Brand Kozan Wine, marketed in Meiji 14 (1881). As the label is written only in English, this was possibly bottled as a wine for export, or for exhibit at an industrial fair or competition. It was discovered during the dismantling of the old fermentation room. The bottle height is about 30 cm. 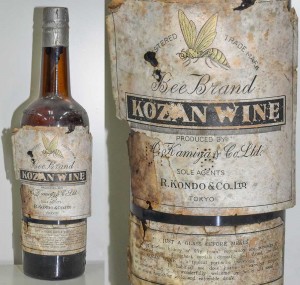 Brick features
From the No. 1 kiln remains, a jug for shōchū (distilled liquor) made in Tokoname, Aichi prefecture, glass items thought to have been containters for cosmetics, and so forth were recovered. These artifacts are thought to have been discarded in the pit after the kiln ceased operation. 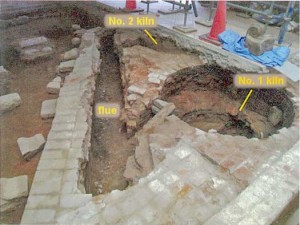 The Chateau Kamiya Former Winery is part of the winemaking facility that industrialist Kamiya Denbē built in the city of Ushikushi, Ibaraki prefecture, aiming to set up the first genuine winery in Japan, with the three structures of the old office building, fermentation room, and warehouse surviving today. Designed by well-known architect Okada Tokitarō, construction is thought to have been completed in Meiji 36 (1903). A rare example of mid-Meiji period brick structures surviving nearly intact, the main portions of the winery were designated an Important Cultural Property in 2008 due to their value as materials for history in general and the history of industrial technology in particular.

The facilities were seriously damaged in the Great East Japan Earthquake of 2011, and reconstruction work began in December of that year. In March 2013, when excavation was conducted in advance of work for the structural reinforcement of an old washroom attached to the fermentation room, brick features consisting of two kiln remains and a flue were detected under the old washroom floor. From these features a Tokoname ware jug for shōchū (distilled liquor), fire-resistant bricks, wine bottle caps and so forth were found, and on the northern side of the former fermentation room, a roof tile thought to have been used at the start of the facilities’ operation was discovered. The fire-resistant bricks had been collected from all over the country, and among them were items stamped “SHINAGAWA” and “YTR,” which were also used at the Tomioka Silk Mill (Gunma prefecture), a World Heritage site and National Treasure.

It is unclear how these brick features, ascertained for the first time in the current investigation, were used. Similar features have been discovered at the former Miyazaki winery in the city of Kōshū, Yamanashi prefecture, but details as to which stage they were used in the winemaking process are unclear. The flue found in this investigation very possibly leads southward underground from the old washroom, and in a photo taken in Meiji 44 (1911), a gigantic chimney no longer surviving stands at a spot where the flue is thought to lead. Also, as the washroom is labeled “washroom/boiler room” in an old plan, these features are thought to be related to the chimney and a boiler.

While further examination is needed regarding the concrete function of this facility, it is a source of endless fascination for learning about the winemaking technology of the day. (Kimoto Takachika)

Artifacts which lay sleeping in a historic winery 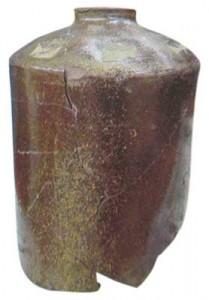 Roof tile
Height: 24.4 cm; width: 28.6 cm. This was laid on the roof of the old fermentation room at the start of its operation. 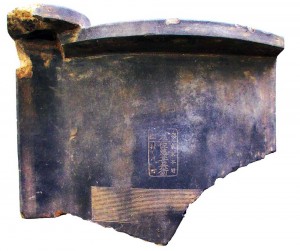 Bricks
Recovered from the old washroom, all are fire-resistant items. Gathered from throughout the country, the one marked SHINAGAWA was made in Tokyo, YTR in Chiba, MITSUISHI in Okayama, and SYOWA YOGYO in Hokkaido. Lengths are around 20–23 cm. 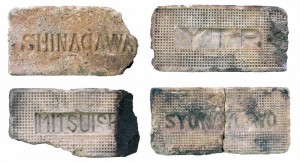