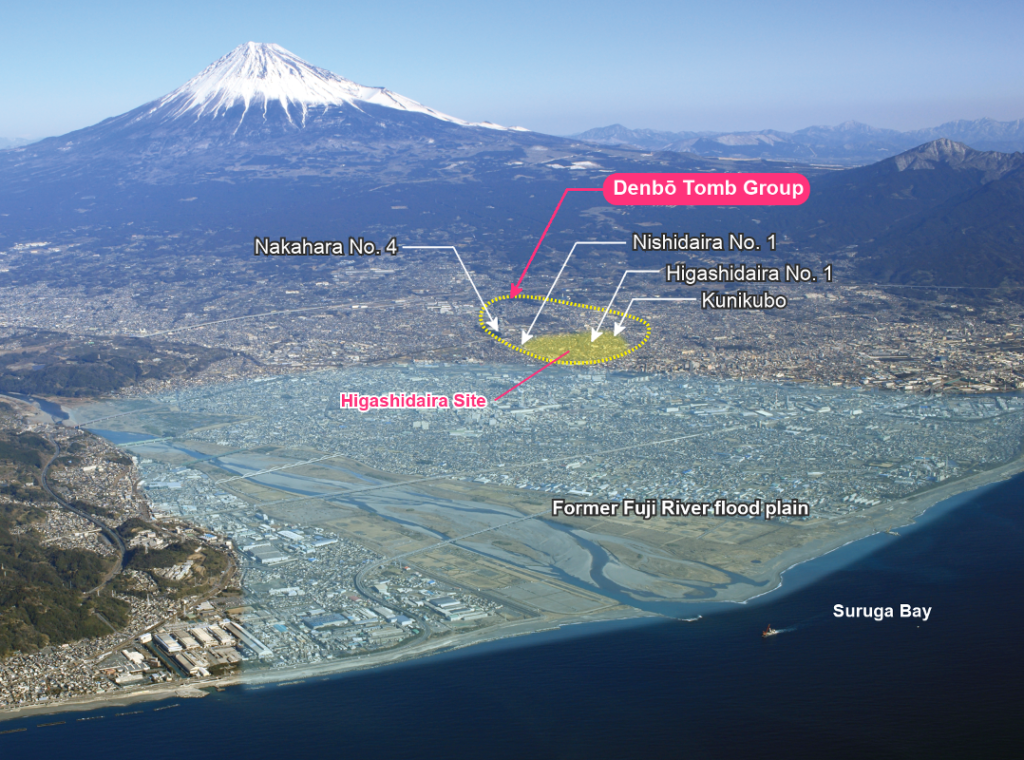 The Denbō Tomb Group and Mt. Fuji (from the southwest)  Sitting atop a tableland formed by a lava flow from Mt. Fuji, the site overlooks the lowland flood plain of the former Fuji River and Suruga Bay. It is a strategic point which connects to its rear with the Tōkaidō and other roads leading towards Yamanashi Prefecture, and directly with Suruga Bay as well using river access. Adapted from Hakkutsu sareta Nihon rettō 2020 [Excavations in the Japanese Archipelago, 2020] (Bunkachō [Agency for Cultural Affairs], ed., Kyodo News, 2020).

Nakahara No. 4 Tomb: Mound and moat  The round mound was circled by a moat 1.8 m across at its widest point. Below the surface at the mound’s center, there emerged a horizontal stone chamber which had lost its ceiling stones. 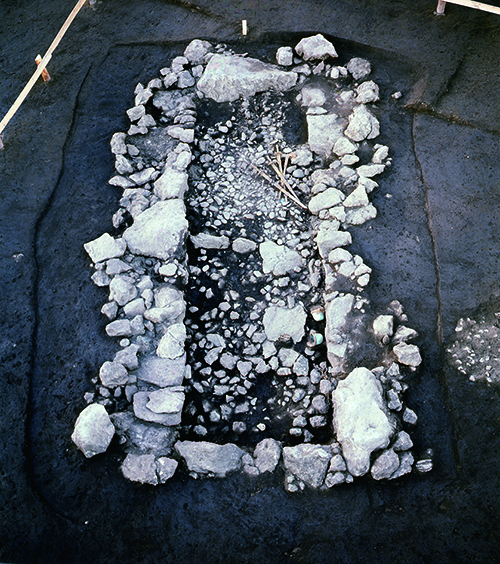 Higashidaira No. 1 Tomb: Overview of the stone chamber  A step was provided at the entrance to the narrow chamber, which never widened beyond the entrance. The stone chamber was slightly wider than at Nakahara No. 4. From around the mid-seventh century, and 5.1 m in overall length.

Needles  A large needle with a smaller sewing needle attached. There were 2 examples of large needles, and 17 (inferred) smaller needles recovered. Length: 17 cm. 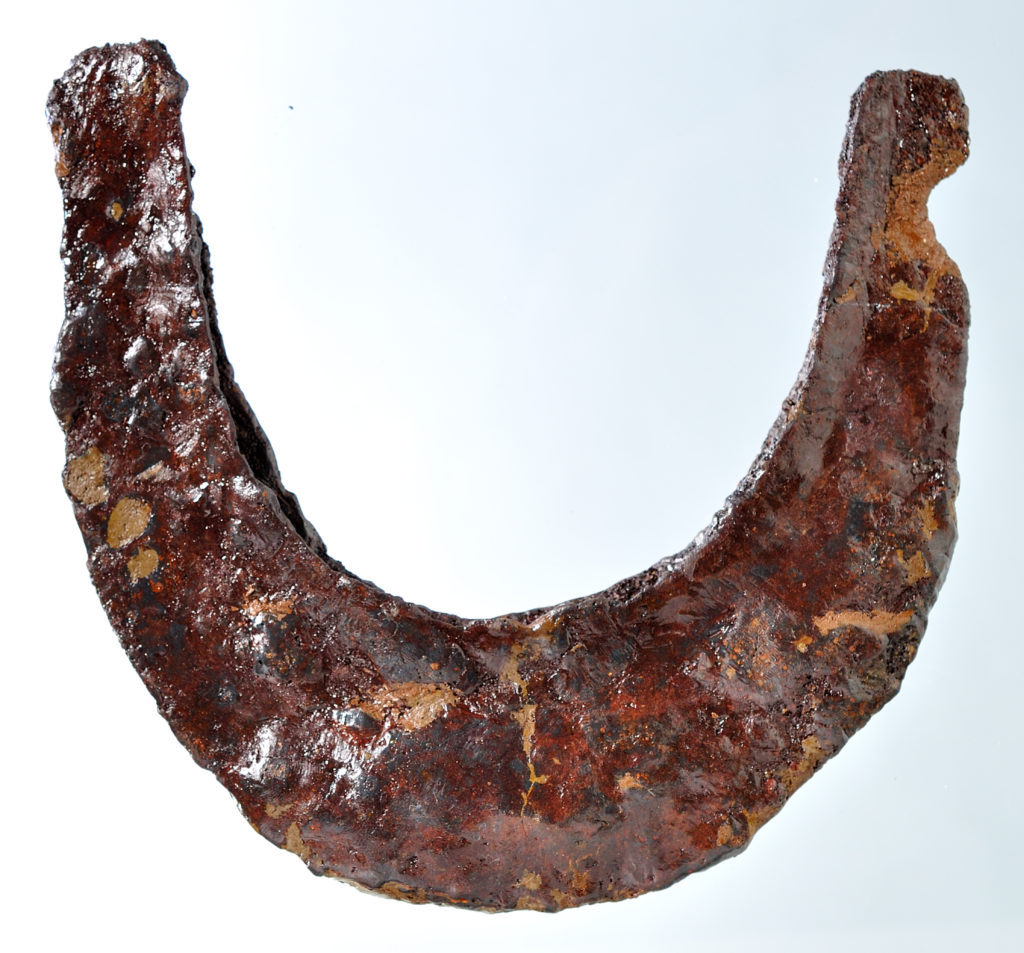 Iron blade tip  This was a sleeve attached to serve as the cutting edge for the wooden blade of a hoe or spade. Four examples were recovered. Length: 15.1 cm; width: 17.8 cm.

T-shaped bladed implement  An iron object of great mystery, with only five examples known nationwide. Both ends of the top of the T are blades, and iron axes with perforations seen in Goguryeo on the Korean peninsula are thought to have been the model. Length: 72.5 cm; width: 19.7 cm. 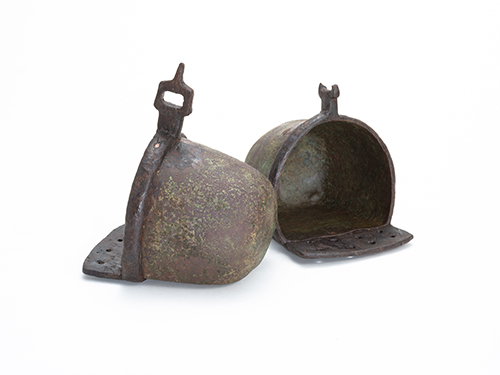 Bronze cupped stirrups  Equestrian gear, suspended from both sides of a saddle, for the rider’s feet. The form is common in eastern Japan. Length: 15.8–16.5 cm; height: 15–18.8 cm. 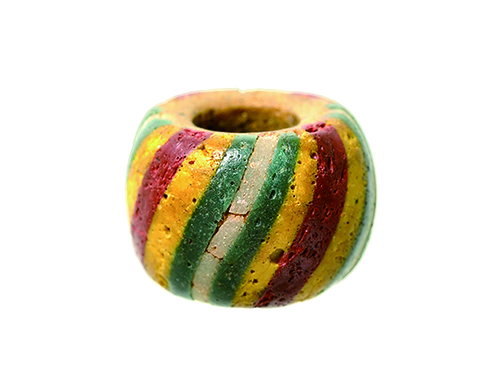 Striped bead  A colored glass bead with red, yellow, green, and white glass precisely laid out in a pattern of diagonal stripes. Similar examples are common in Baekje on the Korean peninsula. Diameter: 1 cm.

Bronze belt ornaments  These are inferred to have been painted with black lacquer. Width: 2.6–3.6 cm.

Tombs of chiefs who ruled at the southern foot of Mt. Fuji

Counted as one of the top three swift rivers of Japan, prior to the Medieval period the Fuji River divided into multiple courses at the southern foot of Mt. Fuji, forming a broad flood plain. Denbō Tomb Group is a comprehensive name for tombs built in the sixth to seventh centuries on the gentle slope at the eastern side of the former Fuji River flood plain. More than 80 tombs have been ascertained over a wide area spanning approximately 2 km east–west by 3.5 km north–south. Excavations were carried out in the 1980s and 90s for the major tombs among these, and as site reports have been published one after another in the second decade of the twenty-first century, an image has emerged of a line of richly individual chiefs who undertook the development of the region at Mt. Fuji’s southern foot.

To begin with, the Nakahara No. 4 Tomb, built in the latter half of the sixth century which corresponds to the start of this tomb group’s construction, draws attention. Despite being a small round mound 11 m in diameter, along with extremely plentiful weapons, equestrian gear, pottery, and so forth, large amounts of agricultural and craft tools including blacksmithing equipment were recovered. At that time burials with blacksmithing tools were extremely rare in eastern Japan, and from the characteristics of these grave goods the person interred in this tomb is thought to have been a chief who, in combination with a military role, led a group of civil engineering and handicraft specialists including immigrants, and promoted the development of Mt. Fuji’s forested uplands and the former lowland flood plain region of the Fuji River.

Following the construction of this tomb, as at the Kunikubo Tomb which yielded a multicolored glass striped bead and an iron bell, for which connections with the Korean peninsula have been pointed out, tombs thought to have close relations with immigrants were built in this group from the end of the sixth into the first half of the seventh centuries.

Strengthening relations with the Yamato polity

Subsequently, the Higashidaira No. 1 Tomb was built in the mid-seventh century. Although it was a small round mound of 13 m diameter, beginning with a T-shaped bladed implement regarded as a ceremonial weapon of Goguryeo derivation, the grave goods consisting of abundant weapons and equestrian gear draw attention. Although hardly ever encountered at the time of the Nakahara No. 4 Tomb, gilt bronze decorative equestrian gear was also recovered at the Higashidaira No. 1 Tomb, items found throughout eastern Japan in the same era among grave goods for persons thought to have been military leaders, from which it can be surmised that the chiefs of this region starting with the occupant of the Higashidaira No. 1 Tomb were being regarded as all the more important by the Yamato polity.

From the Nishidaira No. 1 Tomb, built in the latter half of the seventh century, a time corresponding to the end of this tomb group’s construction, in addition to a square-pommeled sword thought to have been made at a workshop in the environs of the Asuka Palace, a sword with a curled frond-shaped hilt showing relations with eastern Japan was also recovered. Further, as a set of eighth-century bronze belt ornaments was also found, it is possible that someone of the administrative class of the ritsuryō-era Fuji District was buried there at a later date.

Additionally, the Higashidaira Site which overlaps in part with the Denbō Tomb Group is thought to have been the headquarters of Fuji District of ancient Suruga Province. Also within the site precincts are the remains of an eighth-century Ancient period temple, the Mikka-ichi abandoned temple site.

The finds recovered from this tomb group can be called a vital body of data showing the historic transition by which an emergent class of regional chiefs, who shouldered local development from the Late Kofun to the Asuka periods, matured into the district official class (families who served as local administrators) in the Nara period. (Fujimura Shō)