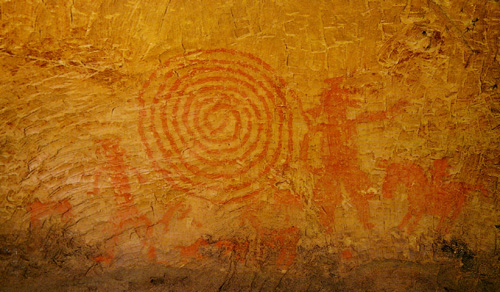 Mural on the Kiyotosaku tunnel tomb’s back wall Not the product of a single stroke, arcs were drawn repeatedly to complete a spiral as the result. 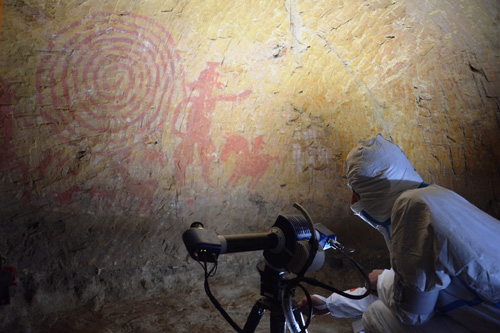 Making a 3D measurement of the burial chamber This was carried out with cooperation from Tohoku University. Because of the difficulties of providing public access to the site itself under current conditions, efforts are underway to enable many to see the mural thus recorded using 3D technology. 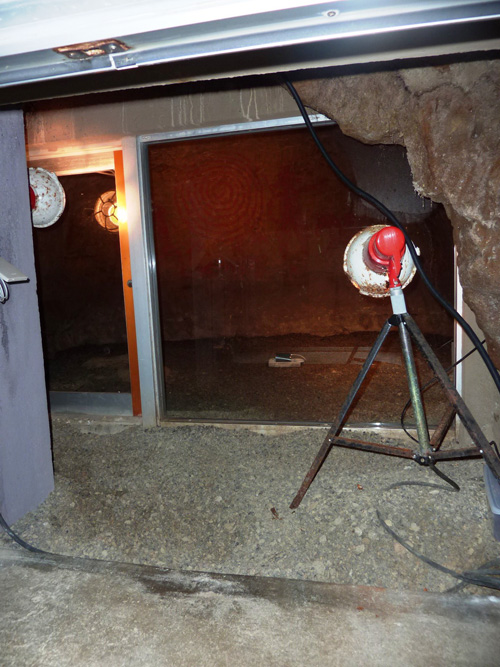 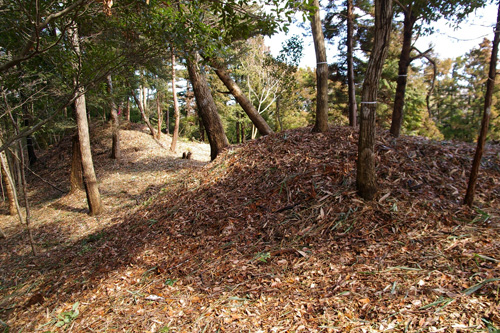 Mound made as backdrop 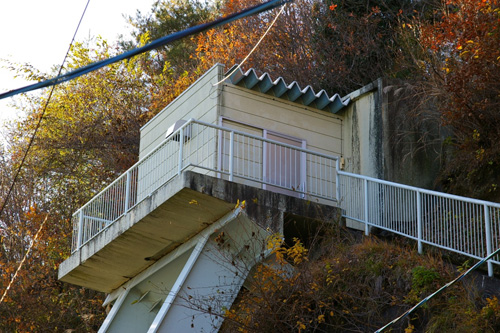 Conservation facility for the tunnel tomb 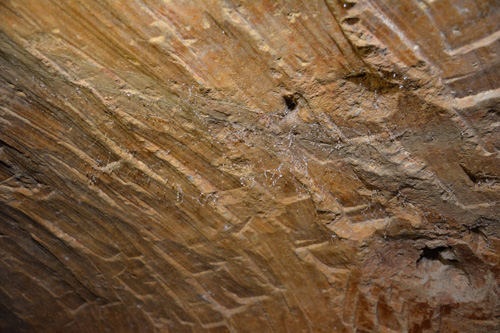 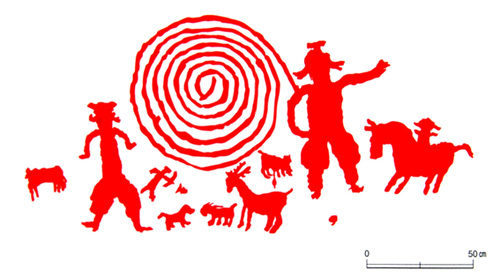 Mural motifs 1. Seven-turn spiral. 2. Human figure with a raised hand. Various interpretations ascribe the head portion’s shape to a hat, hairstyle, helmet, and so forth. The torso has a fullness as if wearing a cuirass, and leggings tied at the knees plus shoes are also given expression. At 76 cm in overall size, it is the largest human image drawn at any burial mound or tunnel tomb in the nation. 3. Horse-riding human figure with both arms spread open. 4. Hunting scene. An adult and a juvenile deer, faced by a hunting dog, and a human letting fly an arrow are drawn. Also depicted is an animal thought to be a wild boar, with an arrow flying towards it. 5. Human and animal figures. The human wears a hat and has the arms spread apart, and the animal resembles a cow. 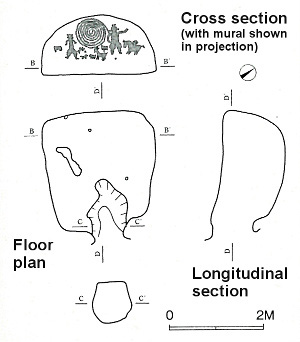 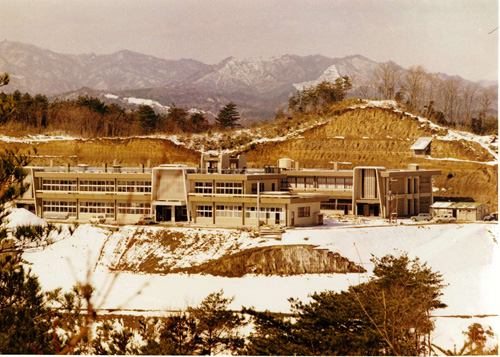 The site at the time of discovery The discovery was made during construction of new facilities at an elementary school.

A variety of designs expressed solely in red

Three hundred fifty tunnel tombs clustered together
Historic Site Kiyotosaku Tunnel Tomb is located at the back of a coastal plain, 2.5 km by straight line distance from the coast. It is part of the Kiyotosaku tunnel tomb group, comprised of 350 tombs in 30 subgroups. Discovered by accident during construction of new facilities at Futaba Minami Elementary School in 1967, in the following year it was nationally designated as a Historic Site.
The tomb is 5.15 m in length, with the nearly square inner burial chamber 2.84 cm wide and 1.56 m in height, and having a domed shape in cross section. The back wall has paintings executed in red ochre. As no grave goods have been found the age of the site cannot be specified, but it is thought to have come into existence during the Final Kofun period (first half of the seventh century).
This particular tomb sits at the highest location within the Kiyotosaku tunnel tomb group, and from the presence of painted murals the occupant is thought to have been a locally powerful figure or the head of an occupational group.
Among tunnel tombs with painted murals in Fukushima prefecture, the two Historic Sites of Hayama (in the city of Minamisōma) and Izumisaki (in Izumisaki village) are seen to share the common motifs of spirals, human figures, horses, and deer. Also, similarities can be seen with the Gorōyama tomb of Fukushima prefecture in the motifs of humans with raised hands, humans riding horses, and hunters.
Atop the hills where the tunnel tombs are located is a group of mounds that has been treated as the Kiyotosaku tomb group. But in the 1967 investigation no burial facilities were found, and recently it has been pointed out that these may have been made as a symbolic backdrop to resemble actual burial mounds.

Access remains restricted even now  While the tomb did not suffer direct damage from the Great East Japan Earthquake, because access to the area has been restricted on account of the accident at the Fukushima Daiichi Nuclear Power Plant, at present the site cannot be opened to the public. For this reason, the current condition is being monitored by tracking the temperature and humidity data through remote observation, coupled with periodic visual inspections. Also, with the assistance of Tohoku University an archive is being made using three-dimensional scanning measurement. As the site is within the area for which residents’ return is expected to remain difficult for some time, consideration is being given to holding 3D virtual experience events in lieu of general public access. (Yoshino Takamitsu)