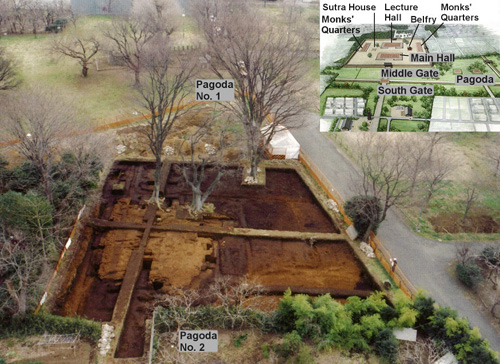 Remains of second pagoda (Pagoda No. 2) The square pit dug for the ground preparation was 11 m on a side and 2.3 m or greater in depth. Tamped earth layers of loam and humus were used as the foundation, giving the impression of greater care than the alternate layers of loam and gravel piled up for the initial pagoda (Pagoda No. 1). Adapted from Hakkutsu sareta Nihon rettō 2018 [Excavations in the Japanese Archipelago, 2018] (Bunkachō [Agency for Cultural Affairs], ed., Kyodo News, 2018). 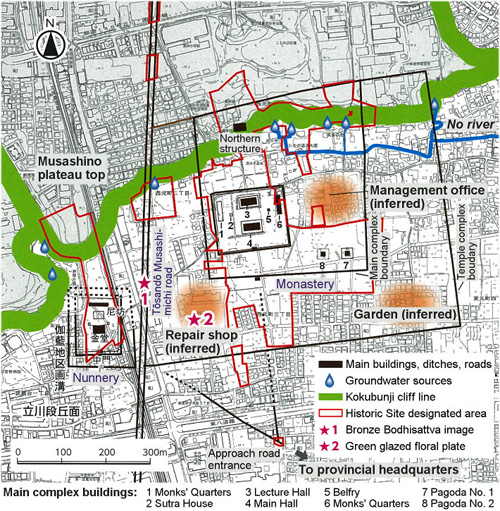 Overall view of the Musashi Kokubunji temple remains This location was chosen for its proximity to the provincial headquarters, convenience of access, and the presence of spring water. Adapted from Hakkutsu sareta Nihon rettō 2018 [Excavations in the Japanese Archipelago, 2018] (Bunkachō [Agency for Cultural Affairs], ed., Kyodo News, 2018).

Standing Kannon (Avalokitesvara) Bodhisattva image Total height is 30 cm. It was recovered from the Tōsandō Musashimichi road. It is regarded as a Buddhist image from the Late Hakuhō period, thus older than the establishment of the temple. 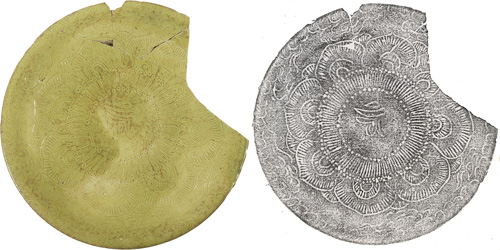 Green glazed plate with floral pattern Sanskrit written in the center of the upper surface is a seed syllable for the Vairocana Buddha (vaṃ in Siddham script). It is a product of the Sanage kilns in Aichi prefecture, though no similar example is known either at the source or at any temple or government office elsewhere throughout the country, and is thought to have been specially made for Buddhist rites conducted at Musashi Kokubunji temple. Rim diameter: 15.7 cm; vessel height: 2.65 cm. 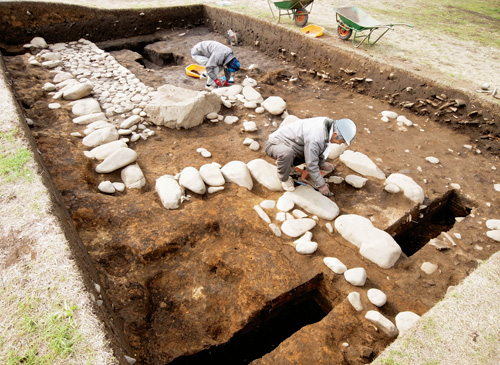 Main Hall foundation platform during excavation The Main Hall is the temple structure that housed the principal Buddha image. The platform is approximately 45.4 m east–west by 26.2 m north–south. The platform had stairs set on its northern and southern sides, and was encircled by a stone pavement for catching run-off rainwater from the roof. 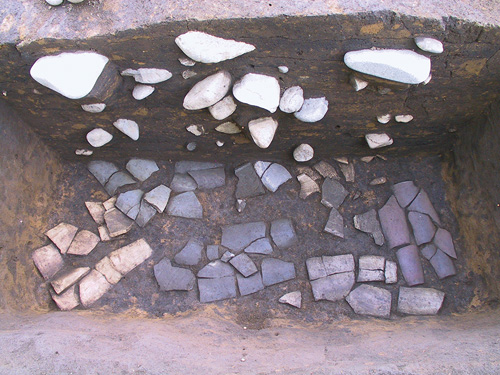 Roof-tile paving as detected within pillar foundation holes of the Middle Gate Paving the bottoms of holes dug for pillar foundations with roof tiles is rare. The square holes were 1.5 m on a side, and about 1 m deep.

Roof tiles found at Pagoda No. 2 A tile with characters for “pagoda construction” (left) and one with a five-petal lotus pattern (round eaves tile, right). Many tiles with characters for the province, district, village, or personal names were recovered at Musashi Kokubunji temple.

Cultural/Religious Center of the Ancient Province of Musashi

A grand temple complex built through a province-wide effort
The Historic Site of Musashi Kokubunji Temple is located atop the Musashino plateau which spreads at about 65 m elevation over the area of the headwaters of the No river, a tributary of the Tama river, and straddling the Ancient period state road Tōsandō Musashimichi are a monastery on the eastern side and a nunnery to the west. In 741, Emperor Shōmu issued a decree for the construction of a state-supported temple (kokubunji) in each province, and it is inferred that twenty years were required to complete the construction.
Through previous excavations it had become clear that the area of the temple and the surrounding settlement supporting it extended over an area 2 km east–west by roughly 1.5 km north–south. In the precinct of the monastery, in addition to the main buildings including the Main Hall, Lecture Hall, Belfry, and Middle Gate, a seven-storied Pagoda had been discovered at a distance of about 200 m to the east of the latter.
Musashi was a large province comprised of 21 districts, and on the huge amounts of roof tiles produced for the temple at the Minami Hiki kilns in Saitama prefecture and elsewhere, characters for the names of 20 districts are seen, excluding only the district of Shiragi that was established in 758. From this the involvement of the entire province can be discerned in the construction of the temple, which was built as a particularly large-scale example among all provincial temples throughout the nation.

Discovery of the remains of a second pagoda
Excavation was conducted of the principal structures such as the Main Hall, Lecture Hall, and seven-storied Pagoda from the 2003 to 2012 fiscal years, and aspects of the scale, foundation, and associated artifacts were ascertained for each building. Deserving particular note among the discoveries was that of a second pagoda (Pagoda 2), newly found at a location about 50 m west of the previously known Pagoda 1.
In the Shoku Nihon kōki chronicle there is a record of the Saki no Obusuma District Supervisor, Mibu no Kishi Fukumasa, requesting and receiving permission in 845 to rebuild the seven-storied pagoda at Musashi Kokubunji which had been struck by lightning and lost to fire, so it can be seen that there were at least two pagodas differing in age at the temple. Traces of rebuilding following the conflagration have been found at the site of Pagoda No. 1, but the outlines of the entire process of construction including that of Pagoda No. 2 remain unclarified.
From the newly discovered remains of Pagoda No. 2, round eaves tiles with a five-petal lotus pattern not seen at other buildings, and tile fragments with impressions of the characters for “pagoda construction” have been recovered in large numbers. It would appear that the hope of ancient people for the reconstruction of the pagoda is expressed in these artifacts. (Nakamichi Makoto and Yoda Ryōichi)