Excavation precinct
In the 2011–12 excavation, numerous pit structures and embedded-pillar buildings of the Heian period were found. 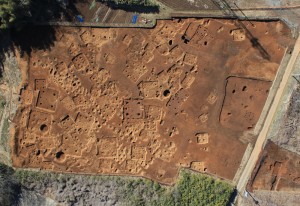 Hinoshi (clothes iron)
The first such discovery from Ibaraki prefecture. With coals placed into the copper fire pan for heat, it was used as a clothes iron to smooth out wrinkles in cloth and so forth. Traces can be seen in the iron handle of rivet-shaped fittings having been replaced. Bits of woody material remained in the fire pan. Length: 27.7 cm; weight: 260 g. 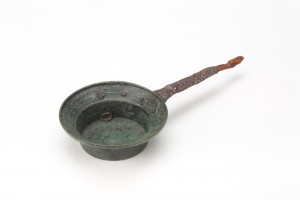 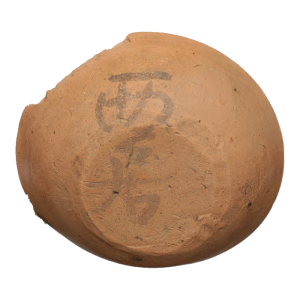 The characters 冨福 (abundant wealth) are thought to be part of a formula for good luck. Rim diameter: 12.2 cm; vessel height: 4.4 cm. 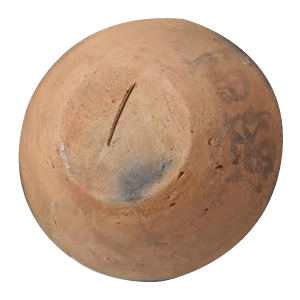 Clay spindle whorls
Recovered from within pit structures. Three items have writing made with a spatula or sharp instrument, and one with the characters 大刀自 (read “Ōtoji”) made with a spatula is thought to have belonged to a woman of influence. Diameters: 4–6.8 cm; weight: 35.2–79.4 g. 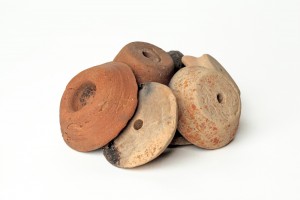 A settlement that made thread and cloth

Located in the southern part of Ibaraki prefecture, Kamiya is a composite site that was utilized as a settlement and hunting ground in the Jōmon period, as a settlement from the Kofun into the Heian periods, and as a cemetery in the Muromachi period.

In the Heian period this region was part of the village of Ono in Shida district, ancient Hitachi province. Numerous features have been confirmed within the settlement, including 56 pit structures, 10 embedded-pillar buildings, and four large oval pits, from which it is seen that the settlement expanded in this period.

From within the pit structures sherds have been found of green-glazed and ash-glazed pottery, high-class items at the time, along with round ink stones and ink-inscribed pottery. The presence can thus be discerned of men of influence, who were literate and able to obtain high-class goods. In addition, along with the recovery of agricultural and fishing tools, as a special characteristic there were 16 spindle whorls of clay, stone, and iron found, and it appears this village was engaged in the manufacture of thread.

Also, from one of the large oval pits, a hinoshi (a long-handled, flat-bottomed metal vessel, filled with hot coals and used as an iron) was found, the first such discovery for the prefecture and rare nationwide. This tool served for smoothing wrinkles or putting pleats in cloth, and indicates the village was not only involved in the production of thread but of cloth as well. It may have been closely related to the examples of cloth from Shida district that survive in the Shōsōin imperial treasury and at Hōryūji temple in Nara.

From other large oval pits, pottery with human faces drawn in ink and large Sue ware jars have been found together with large amounts of carbonized materials. It is thought that some kind of ritual utilizing fire was conducted here. (Sakamoto Katsuhiko)