Shibukawa City, Gunma Prefecture
Latter half of the Middle to Late Kofun Periods (mid-fifth to start of the sixth centuries) 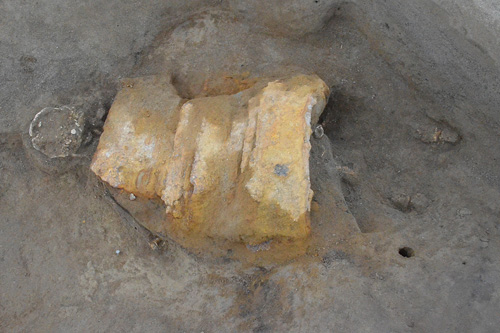 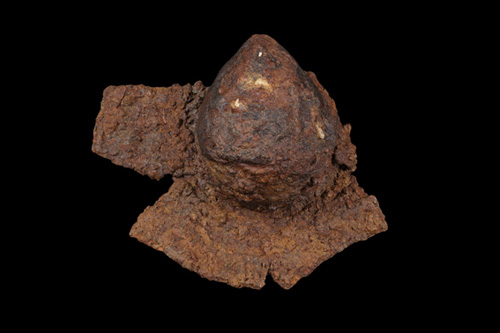 Helmet under the Kofun period man’s head This visorless keeled helmet (shōkakutsuki kabuto) is made of five belt-shaped strips of iron fastened with iron rivets. Flaps to protect the cheeks and neck also survived nearly as they were at the time. 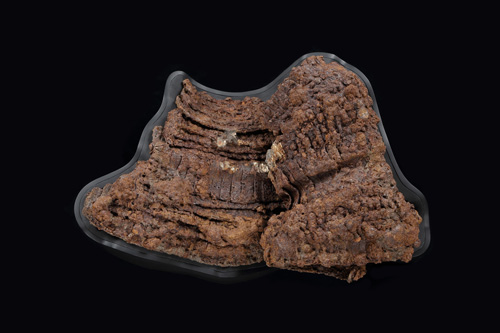 A second armor cuirass (top); set of deer antler armor plates (bottom) These were found 1 m west from the man dressed in armor. The lamellae (plates) of this cuirass were much fewer in number than the one worn by the man, and were laced with leather thong rather than braided cord. Found within the cuirass were 50 lamellae made of deer antler, thought to have been a chest protector. This is the first such discovery in Japan. 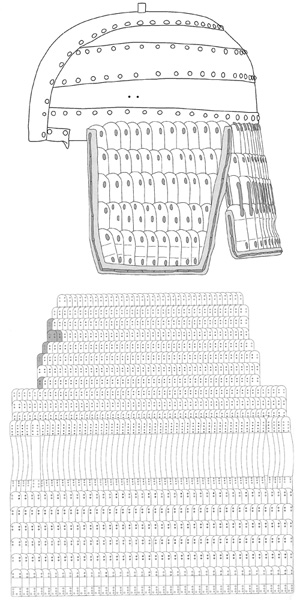 Kofun period man’s helmet and cuirass (reconstruction sketch) The cuirass was made by lacing 1,800 lamellae together with braided cord. 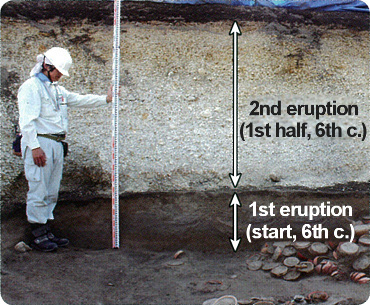 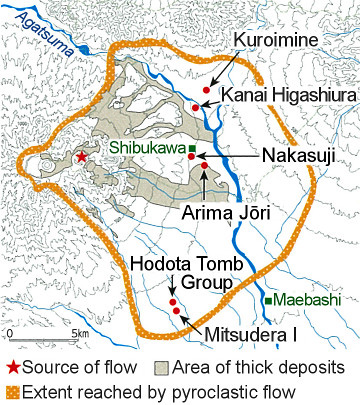 Extent of pyroclastic material deposits (north at top) Flow is seen to have been towards the east–northeast. Adapted from Hakkutsu sareta Nihon rettō 2018 [Excavations in the Japanese Archipelago, 2018] (Bunkachō [Agency for Cultural Affairs], ed., Kyodo News, 2018). 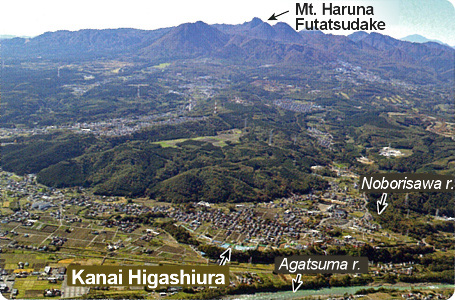 Distant view of the site (from the northeast) The Kanai Higashiura site lies about 8.5 km northeast from the Futatsudake peak of Mt. Haruna which erupted. It is a strategic area for transport, with access to the Shinano region going upstream on the Agatsuma river. Adapted from Hakkutsu sareta Nihon rettō 2018 [Excavations in the Japanese Archipelago, 2018] (Bunkachō [Agency for Cultural Affairs], ed., Kyodo News, 2018).

Closing in on images of Kofun period people
The actual facial features were reconstructed based on morphological characteristics of the skulls. The man dressed in armor had a countenance with a high and narrow forehead, high orbital ridges, and a narrow nose, characteristics held by Kofun period people of the Kinki and northern Kyushu regions (the so-called immigrant features from the southern Korean peninsula). The woman with the necklace had a level chin and broad nose, and generally solid features, characteristics shared among Kofun age people of the Kantō and Tōhoku regions of indigenous derivation.
In addition, from the traces of muscular development remaining on the arm and leg bones, it is surmised that the man engaged in the activities of horse riding and archery on a regular basis. A high possibility of the woman’s having experienced childbirth was also seen from an analysis of her pelvis. 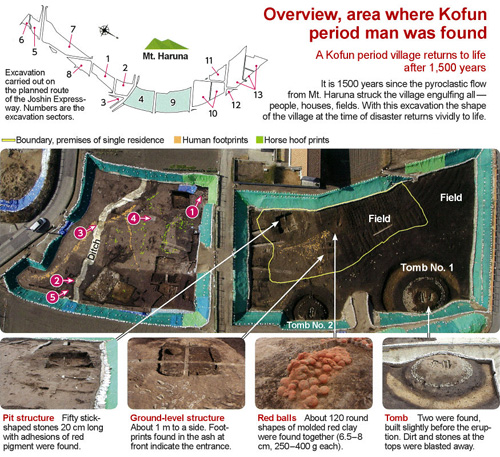 ① Ceremonial feature Pots, jars, dishes, etc., were placed within a circular enclosure. In addition to 900 pieces of pottery, ritual paraphernalia such as mortar-shaped and other beads, imitative stone articles, and iron implements were found in great numbers. At some points as many as 20 layers of dishes were stacked up. 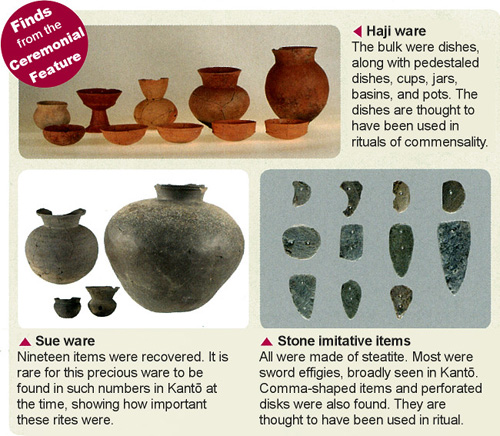 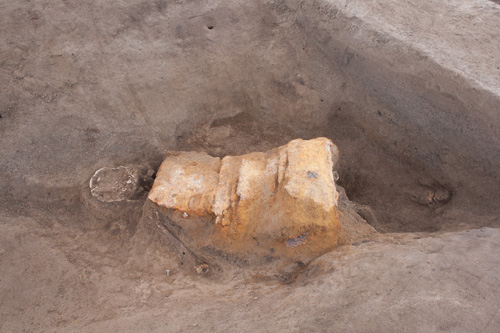 ② Man dressed in armor A man in his forties, 164 cm tall, face down with elbows bent and on both knees. 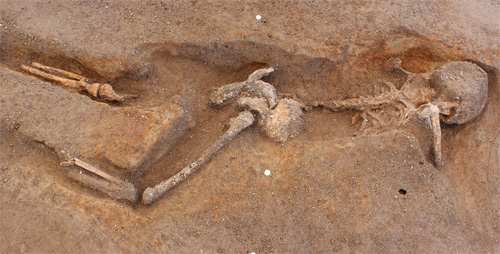 ③ Woman wearing a necklace Centering on a jasper bead, 12 cylindrical beads and approximately 70 small glass beads were recovered from the necklace, plus 21 mortar-shaped beads from the vicinity of the waist.

④ Small child Found collapsed, face down and with the head toward the southeast.

⑤ Infant (no photo) A cranium was discerned that was judged to have been several months old.

A first for Japan! “Kofun period man dressed in armor”

A village buried by Mt. Haruna’s eruption
Called the “Pompeii of Japan,” the Kuroimine Historic Site and the Nakasuji site are located in Gunma prefecture, and Kanai Higashiura is like these a site that was buried in the sixth century by the eruption of Mt. Haruna. At the northwestern edge of the Kantō plain, it sits on an alluvial fan formed by the Noborisawa river flowing down from Mt. Haruna.
Worthy of special mention about Kanai Higashiura is that an adult man who fell victim to the eruption was discovered dressed in armor. Helmets and armor are ordinarily found mostly as grave goods placed in tombs, and this was the first time in Japan that armor was discovered as it was actually worn by someone.

Adult male and female, young child, and infant skeletons
Skeletal remains of four individuals were found at Kanai Higashiura, including those of the man dressed in armor. The four consisted of a male adult in his forties (the man in armor), an adult female in her thirties (wearing a necklace), a child of around five years, and an infant.
The armor cuirass worn by the man was exquisitely made by lacing as many as 1,800 iron lamellae (plates) together using braided cord, and at his waist hung a knife with a deer antler hilt, and a sharpening stone. Nearby was another cuirass thought to belong to this man, plus an iron spear and iron arrow points, all of which were unusual and splendid items.
Of great interest is that morphological analysis of the skulls revealed phenotypic differences, with the adult male having immigrant physical characteristics whereas the adult female was of indigenous descent. Further, it is intriguing as well that the pair are considered to have spent their early childhood years in the same geological region based on the results of scientific analysis of dental strontium levels to infer their places of origin, and that the region itself is presumed to lie to the west of Kantō. Regarding their place of origin, taking into consideration the date of formation of the site and the presence of horse-breeding skills, it is possible to name the Ina valley region of Nagano prefecture as a strong candidate.

Closing in on a concrete image of a Kofun period village
One more noteworthy aspect is the discovery of graves, fields, buildings, a ritual feature, and so forth in collective fashion.
Large amounts of items were recovered from the ritual feature, beginning with 900 pieces of pottery, glass beads, cylindrical beads, steatite mortar-shaped beads and imitative stone articles, iron objects, and so forth. The finding of such a large amount of buried ritual goods other than pottery is rare even on a nationwide basis, and will enable learning about the nature of ritual at the time.
Approximately 60 m north from the spot where the four skeletons were found, three buildings (a pit structure, an embedded-pillar building, and a ground-level structure) and fields were discovered. Unusual artifacts were recovered from these buildings, including 50 stick-shaped stones resembling loom weights having adhesions of red pigment from the pit structure, approximately 120 red balls (objects made of hardened red clay) from the embedded-pillar structure, and a large jar buried within a storage pit from the ground-level structure. Apart from the pit structure, these were in use up to the time of the pyroclastic flow from the eruption.
Also, human footprints and the hoof prints of horses made by trampling volcanic ash with a high moisture content were detected in great numbers, making clear the activities of people and horses in the short interval until the site was buried by the pyroclastic flow.
In this manner, at Kanai Higashiura not only Japan’s first “Kofun period man dressed in armor,” but the shape of the site just prior to being hit by the pyroclastic surge has been preserved in excellent condition, packed in by the volcanic ash and pyroclastic material. While this was a great disaster for the people of that time, as it allows us to reconstruct in fine detail the livelihood and activities of the people of the Kofun period, it is a rare site even on a worldwide scale for the many things it relates to us. (Sugiyama Hidehiro)

History of natural disasters clarified through excavation
A variety of traces left by past natural disasters can often be detected during archaeological excavation. This shows how numerous natural disasters have been in the Japanese archipelago. Earthquakes, tsunamis, and volcanic disasters frequently occur because the archipelago was formed due to deformations of the earth’s crust, resulting from movements against each other of tectonic plates which comprise the planet’s outer surface.
In fact, for the Keihanshin region that was struck by the Kobe earthquake of 1995, which measured the highest value (7) on the Japanese seismic intensity scale, past occurrences in the area of large-scale earthquakes had been pointed out through excavation shortly prior to that event. The evidence consists for example of sand boils or large fissures appearing on the ground surface in conjuncture with soil liquefaction. As these phenomena accompany relatively large-scale earthquakes, with the discovery of their traces through excavation, we can discern the manner of earthquakes which struck that location in the past.
What sort of natural disaster is possible for any particular location? If we can know this before disaster becomes a reality, it is of immense value for measures to prevent or lessen the damage. The traces of past natural disasters etched into sites, in the manner of the terrible pyroclastic flow that struck Kanai Higashiura, surely provide just this type of precious information. Moreover, as more than 8,000 excavations are conducted each year throughout the country, they tell a history of natural disasters on a nationwide scale for hundreds, thousands, and even tens of thousands of years which cannot be conveyed through oral tradition. We could say that in this manner as well, archaeological excavation holds significance for the modern day. (Morisaki Kazuki)