Okayama City, Okayama Prefecture
End of the Early to the start of the Middle Kofun period (latter portion, fourth century) 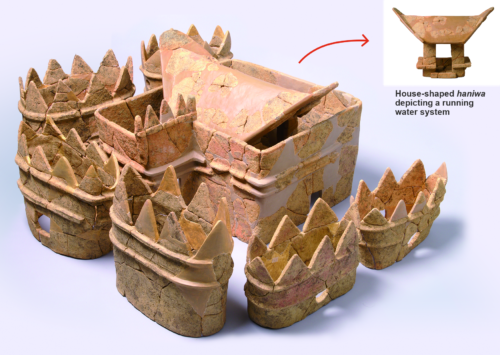 Haniwa recovered from the shimajō (“island-shaped”) feature An enclosure-shaped haniwa was surrounded by fence-shaped haniwa, within which it is further thought that a house-shaped haniwa with a depiction of a running water system was placed. Adapted from Hakkutsu sareta Nihon rettō 2019 [Excavations in the Japanese Archipelago, 2019] (Bunkachō [Agency for Cultural Affairs], ed., Kyodo News, 2019).

Conditions of discovery at the shimajō feature 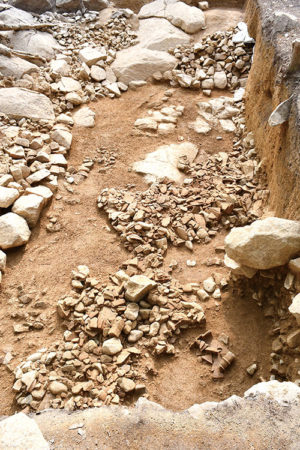 Haniwa group between the mound and the shimajō feature To the north of the land bridge 10 or more fence-shaped haniwa, plus an enclosure-shaped and a house-shaped haniwa are thought to have been placed in concentrated fashion. 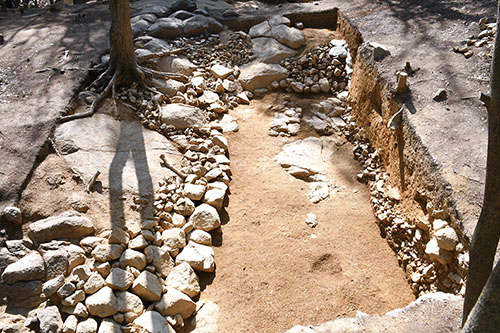 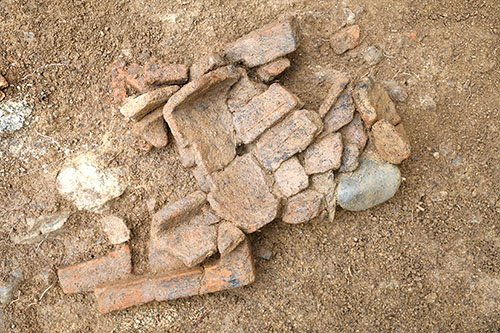 House-shaped haniwa with a depiction of a running water system, in situ Although recovered in scattered condition, it is thought to have originally been placed within the enclosure-shaped haniwa. 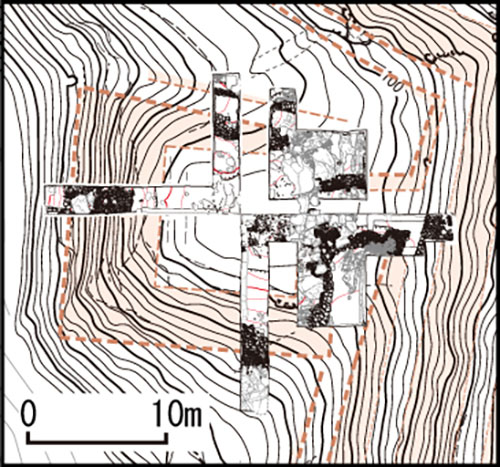 Conjectural reconstruction of the shimajō feature 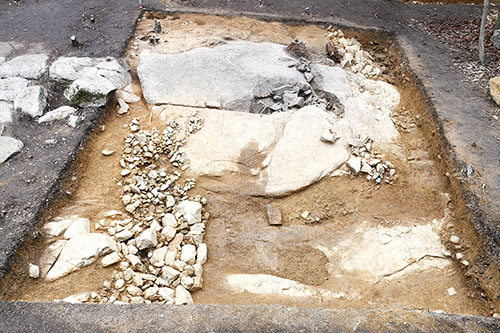 Paving of the western slope and land bridge The paving here utilized bedrock processed for that purpose. No haniwa have been detected on the southern side of the land bridge. 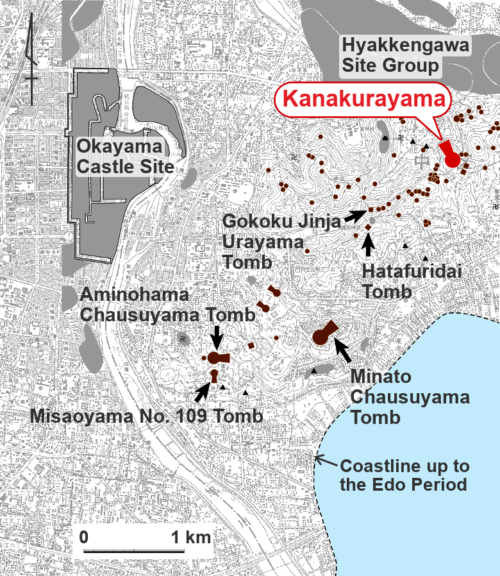 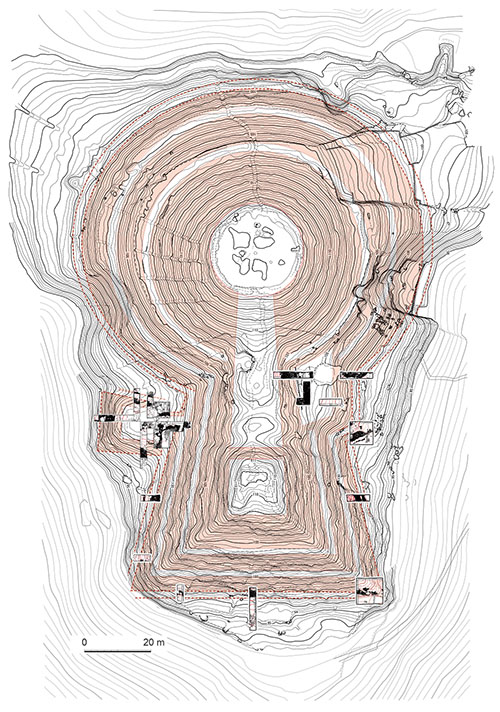 The mound of the Kanakurayama tomb A keyhole-shaped mound built in three tiers and approximately 160 m in overall length, with the round portion about 110 m in diameter and 15 m high. A tsukuridashi (square projection) is attached to the western side of the mound and there is a shimajō (“island-shaped”) feature on the eastern side. There is a one-tier difference in elevation between the rectangular front and the round portions, and a low terrace-like tier encircles the base of the mound.

Column: A bit of trivia
What are a tsukuridashi and a shimajō feature?

Both are facilities on the circumference of a tomb mound, with a tsukuridashi being a terrace-like extension from the mound, and a shimajō feature standing apart from it in the manner of an island. They are both thought to be locations of rites related to mortuary customs, and the shimajō feature is regarded as having transitioned into the tsukuridashi form. Examples like the Kanakurayama tomb where different types of such facilities are found at the two points of constriction on the mound are rare.

Conditions of discovery at the tsukuridashi 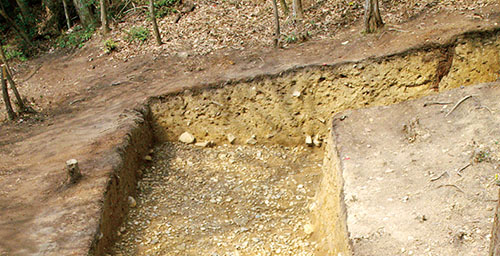 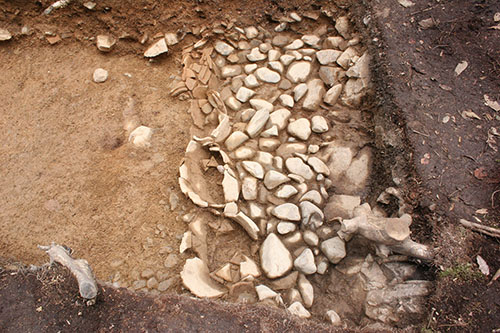 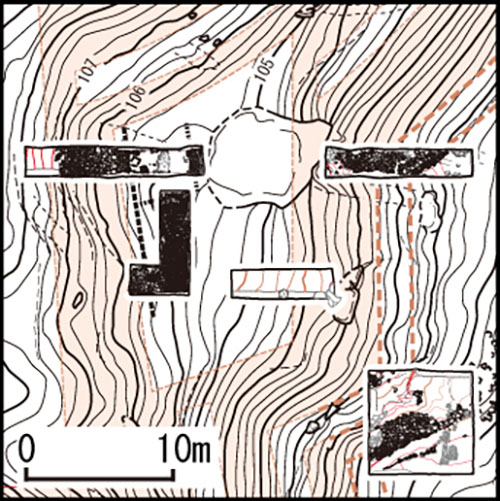 Conjectural reconstruction of the tsukuridashi 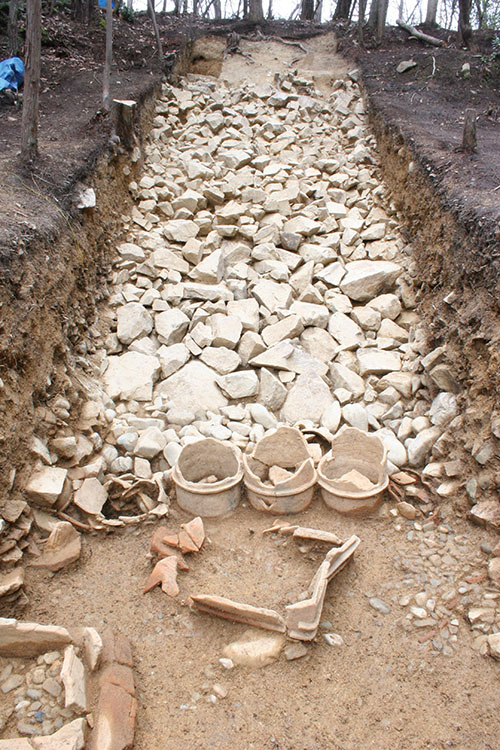 Haniwa group on the upper surface of the tsukuridashi and paving stones of the mound The paving stones are granite rubble 20–40 cm in size, and in the space between the paving and the line of cylindrical haniwa running parallel to it, fist-sized round cobbles were packed.

Haniwa recovered from the tsukuridashi
Recreating the mansion of the tomb’s occupant? 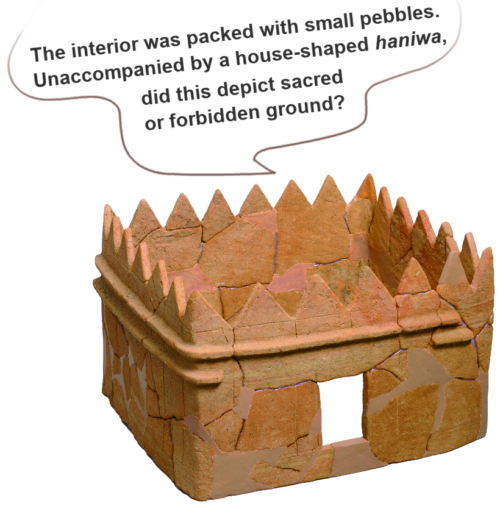 Enclosure-shaped haniwa A fence made of triangular-ended boards stood vertically in a line and held together by horizontal laths is depicted, along with an entrance. Height: 34 cm; long-side width: 56.2 cm; short-side width: 51.6 cm. Hakkutsu sareta Nihon rettō 2019 [Excavations in the Japanese Archipelago, 2019] (Bunkachō [Agency for Cultural Affairs], ed., Kyodo News, 2019).

Conceptual diagram of a haniwa arrangement At least five house-shaped haniwa were put in place. There were various forms, including those with gabled and hip-and-gabled roofs. Adapted from Hakkutsu sareta Nihon rettō 2019 [Excavations in the Japanese Archipelago, 2019] (Bunkachō [Agency for Cultural Affairs], ed., Kyodo News, 2019). 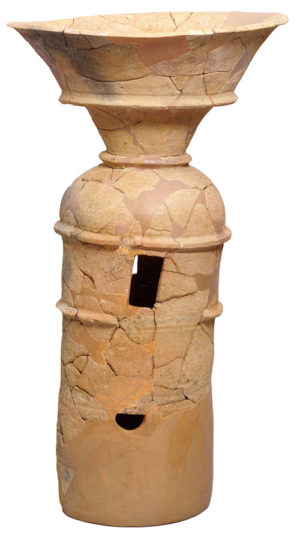 Morning-glory-shaped haniwa There are semi-circular openings at the base, rectangular openings in the third tier, and small circular openings on the shoulder; red pigment has been painted on the outer surface. Height: 89.7 cm; rim diameter: 47.1 cm. 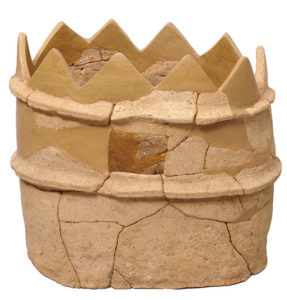 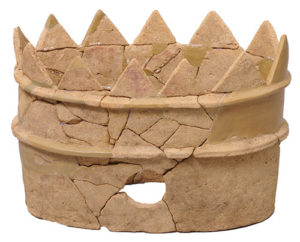 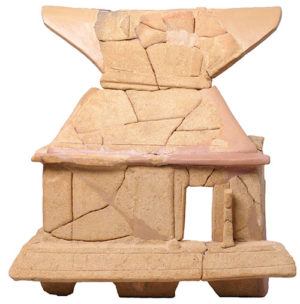 House-shaped haniwa A single-story structure two spans wide and two spans deep, with a hip-and-gabled roof. The spans between pillars are walls with the exception of the entrance on the right front, and there are pillar-like expressions added to both sides of the entrance on its front side. Height: 51.8 cm; length in the ridge direction: 41.2 cm; transverse length: approximately 38.5 cm. 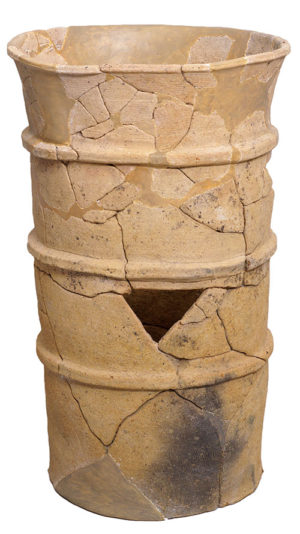 Haniwa recovered from the shimajō feature
Recreating a water-focused ritual conducted by the tomb’s occupant? 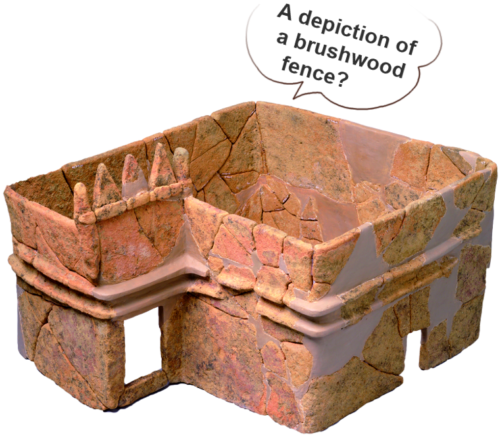 Enclosure-shaped haniwa Depicted in an L-shape and with mountain-shaped and pillar-like projections above the entrance. Rectangular openings are also cut out at the base on the front an back sides. Height: approximately 38 cm; long-axis width: 59 cm; short-axis width: 52 cm. Adapted from Hakkutsu sareta Nihon rettō 2019 [Excavations in the Japanese Archipelago, 2019] (Bunkachō [Agency for Cultural Affairs], ed., Kyodo News, 2019).

Fence-shaped haniwa In contrast to those recovered from the tsukuridashi, there are small-scale (approximately 20 cm in height) and large-scale (about 30 cm high) items. Distances between the horizontal bands, surface decorations, and placements of the openings also vary. 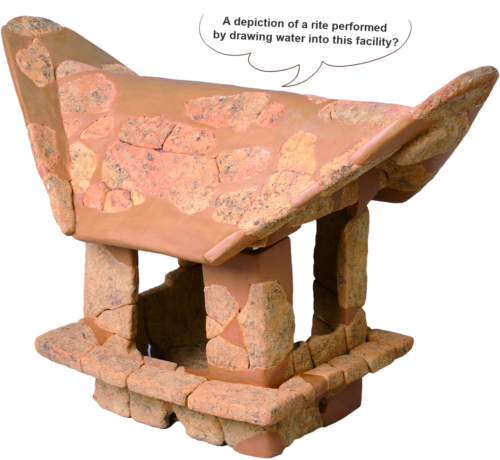 House-shaped haniwa A single-story structure with a gabled roof. The roof and the walls of the sides parallel to the ridge are decorated with diamond-shaped, zigzag, and sawtooth patterns, and the floor depicts a running water system. Height: approximately 37 cm; length in the ridge direction: approximately 32 cm; transverse length: approximately 26 cm. Adapted from Hakkutsu sareta Nihon rettō 2019 [Excavations in the Japanese Archipelago, 2019] (Bunkachō [Agency for Cultural Affairs], ed., Kyodo News, 2019).

Running water system depicted on the house-shaped haniwa floor A wooden trough and two tanks are represented. The two ends of the trough exit through small holes in the walls, which correspond with the openings cut out in the base of the enclosure-shaped haniwa. Adapted from Hakkutsu sareta Nihon rettō 2019 [Excavations in the Japanese Archipelago, 2019] (Bunkachō [Agency for Cultural Affairs], ed., Kyodo News, 2019). 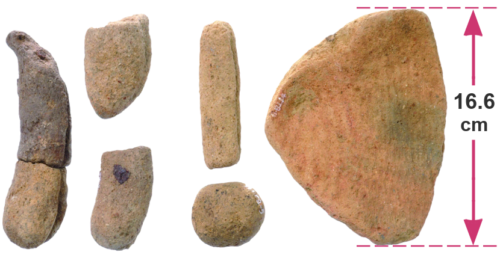 Basket-shaped pottery (far right) and clay objects in the shapes of food The basket-shaped item is in the form of a plate with traces of basket impressions on its inner and outer surfaces. The food-shaped objects are thought to represent the fruit of the chocolate vine (Akebia quinata), bivalve shellfish, rice cakes, and so forth. They could represent ritual offerings served on the basket-shaped pottery. Adapted from Hakkutsu sareta Nihon rettō 2019 [Excavations in the Japanese Archipelago, 2019] (Bunkachō [Agency for Cultural Affairs], ed., Kyodo News, 2019).

Column: A bit of trivia
What is a running water system?

This is a type of facility of the Kofun period regarded as for filtering and purifying water fed by a trough into tanks. With a roofed cover erected above, and visibility from the outside prevented, it is thought to have been a place for conducting ritual involving a chief. This feature is sometimes represented with only a trough-shaped clay object and an enclosure-shaped haniwa.

The form of conducted ritual preserved at a large tomb

The largest fourth-century chiefly tomb in Shikoku, Chūgoku, or Kyushu
The Kanakurayama tomb is a keyhole-shaped mounded tomb located near the center of the Misaoyama hills, a low mountain range lying east of the urban district of Okayama City and known as the “borrowed scenery” backdrop for the famous garden of Kōrakuen. Approximately 100 m in elevation, to the tomb’s north spreads a plain on which the Hyakkengawa site group and so forth are located, with a vast area of modern-day reclaimed land extending to the south, but in former times it overlooked an inlet called “Kibi no Anaumi.” The tomb is approximately 160 m in overall length, and thought to have been constructed in the latter portion of the fourth century. Until the Tsukuriyama tomb in Okayama City was built in the initial portion of the fifth century it was the largest keyhole-shaped tomb in the Shikoku, Chūgoku, or Kyushu regions.

In 1953 an investigation centering on the Kurashiki Archaeological Museum was conducted, excavating two square haniwa precincts at the top of the round portion of the mound, each having one vertical stone burial chamber and a smaller chamber for grave goods. As grave goods, in addition to beads and copper objects, large amounts of iron objects were found. Also, along with cylindrical haniwa, a variety of representational haniwa was confirmed in the square precincts, including items in the shapes of shields, quivers, houses, domestic fowl, and pedestaled dishes.

Following the investigation, no special protective measures were taken, and the tomb was utilized as forest and orchard land, but in consideration of the Kanakurayama tomb’s importance the city of Okayama initiated an investigation from the 2014 fiscal year to confirm its extent, with the aim of preservation, management, and utilization of the tomb.

Excavations centered on the rectangular front portion of the mound, which previously had not been investigated. As a result, paving on the slopes and haniwa rows on the terraces of the mound were found in extremely good states of preservation, and the mound’s structure and form became clear. Further, it was learned that a tsukuridashi (square projection) had been built on the western side of the constriction where the front and round portions meet, and a shimajō (“island-shaped”) feature consisting of a square platform connected to the mound by a land bridge stood on the eastern side of the constriction.

On the other hand, on top of the shimajō feature connected by a land bridge with the eastern side of the front portion of the mound, while the details of the alignment are not clear, in addition to fence-shaped haniwa, house-shaped haniwa, and sunshade-shaped haniwa, basket-shaped pottery and clay objects in the shapes of food were recovered. It is thought that this was a reproduction of a group of buildings appearing to be a chiefly mansion along with a ritual scene in which food and other offerings were made, in the manner of the example known for the Gyōjazuka tomb in the Historic Site Saijō Tomb Group in Hyōgo Prefecture.

From the valley between the feature and the mound to the north of the land bridge more than 10 fence-shaped haniwa, plus an enclosure-shaped and a small-scale house-shaped haniwa were recovered. While these materials were considerably scattered, it can be inferred that the small house-shaped item had been placed within the enclosure-shaped haniwa. The house-shaped haniwa had decorations applied to the roof and walls, and in the interior are representations of a wooden water trough and tanks. This accords with examples of a “haniwa shaped as a running water system” which have been recovered at the Historic Site Takarazuka Tomb in Mie Prefecture and the Historic Site Shionjiyama Tomb in Osaka Prefecture. The recovery in the valley between the shimajō feature and the mound is also a point in common with the Takarazuka tomb and other examples.

Clarification of the structure of the largest keyhole tomb of the fourth century for the Shikoku, Chūgoku, and Kyushu regions, and the conditions of ritual at a mounded tomb as expressed through haniwa are among the important discoveries that were obtained. (Yasukawa Mitsuru)