Refitted materials from the Kitanakashima Nishihara site
A total of 108 examples of refitted materials were confirmed. These indicate that stone tools were actively made at this location. In addition to locally produced chert, the materials include shale and rhyolite.

Panoramic view of the site
Located on the gentle slope of a hill ridge at 520 m elevation. 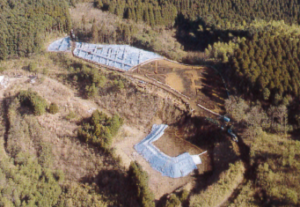 Stone features in situ
These features were detected atop Layer IXb. The majority of rocks comprising the stone features are locally obtainable andesite. Stones around 3–15 cm in size form a number of groups. 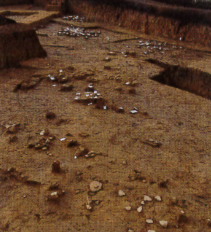 Conditions of recovery (horizontal plan)
The site divides into seven areas based on the concentrations of stone tools and their relations of overlap with stone features. On the upper surface of Layer IXb, stone tool concentrations and stone features overlap horizontally in Areas 1, 3, and 4, and other areas have scatterings of stone. Traces of firing could be seen on most of the rocks forming the stone features.
Adapted from Hakkutsu sareta Nihon rettō 2016 [Excavations in the Japanese Archipelago, 2016] (Bunkachō [Agency for Cultural Affairs], ed., Kyodo News, 2016). 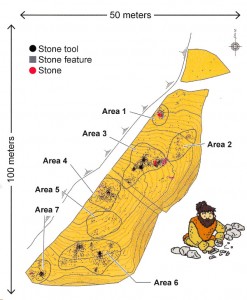 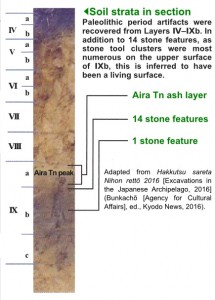 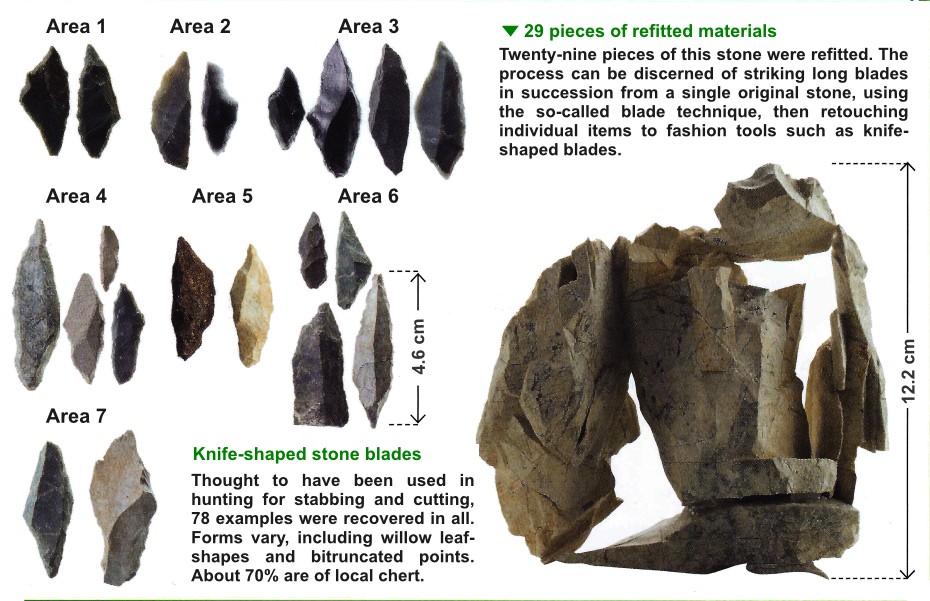 Stone tools from approximately 30,000 years ago are recovered

The Kitanakashima Nishihara site is located on a belt of hills 520 m in elevation extending from the Kyushu Mountains toward the Kumamoto Plain. In excavations conducted from 2010–12 in conjunction with the construction of the Nobeoka Line of the Kyushu Odan Expressway, large numbers of stone tool clusters left by people of the Paleolithic period were found.

The soil strata at the site can be divided into 12 main layers, and among these volcanic ash from a massive eruption by the Aira Caldera in Kumamoto prefecture, from approximately 30,000 years ago, was found in Layer IXa, the top portion of the ninth layer down from the top. The stone tools were immediately below this ash, with more than 4,000 items recovered centering in Layer IXb, the stratum thought to have directly preceded the eruption, along with stone features (facilities for fires, made by assembling cobble-sized rocks) found in good states of preservation. From the places where stone tools concentrate and their relations of overlap with the stone features, it is possible to divide these materials into seven areas.

In addition to knife-shaped stone blades that served as hunting tools, the types of stone implements include stone cores used as the source for tools, and flakes produced when the cores were struck. It was possible to refit portions of these materials into the shape of the original stones before they were split. Being able in this manner to confirm numerous refitted materials indicates that people actively made stone tools at this location. Also, as fine grains of carbon (carbonized materials) spread over the vicinities of the stone features, and as many of the stones themselves were reddened from being heated, these are understood as features where fire was used. These materials bring to mind vivid images of people making stone tools by the fireside.

While the majority of the stone materials consist of chert that is locally obtainable, materials from distant locations were also used, such as obsidian from Koshidake in the city of Imari, Saga prefecture, 110 km away. While no clear chronological difference can be discerned in the typology of knife-shaped stone blades, as differences are recognized between areas within the site in the conditions of utilizing stone material and the manufacturing process, strictly speaking the seven areas were not formed simultaneously but are thought to have taken shape as the accumulation of human activity. Also, taking into consideration that traces in the tool kit of pebble tools or of livelihood activities apart from hunting are not readily visible, the site can be regarded as a camp for short periods of residence where people repeatedly gathered for the purpose of hunting. (Satō Tetsurō)