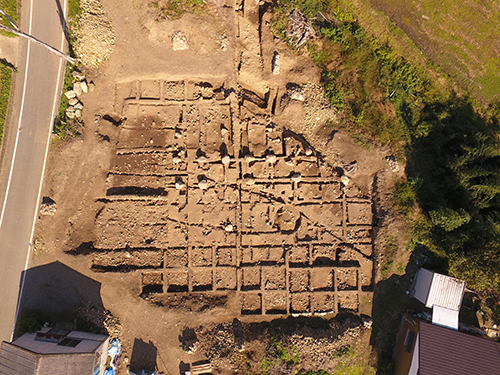 Podium and rows of pillar base stones of the hōsō (main warehouse)  A large-scale building with pillar base stones, seven spans east–west by three spans north–south. The foundation stones are lined up in orderly fashion along the four cardinal directions. 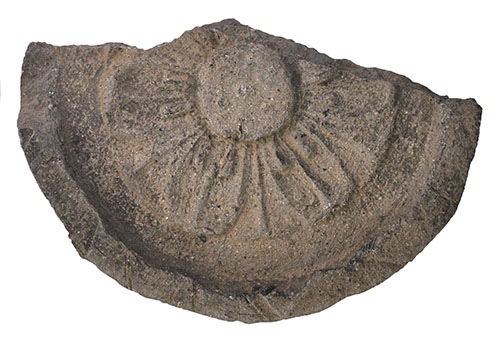 A round eaves tile with a six-petal compound lotus design  A tile from the time of construction of the hōsō (main warehouse). Reconstructed diameter: 15.5 cm. 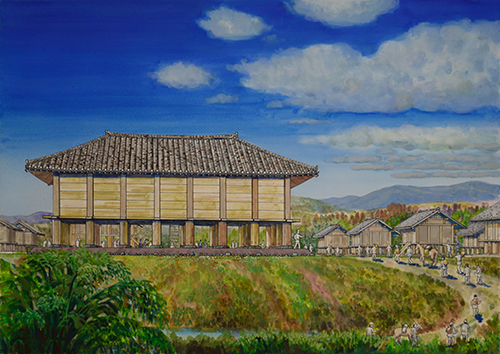 Artist’s reconstruction of the hōsō (main warehouse)  This was thought to have been an imposing building with a roof entirely covered with tiles. 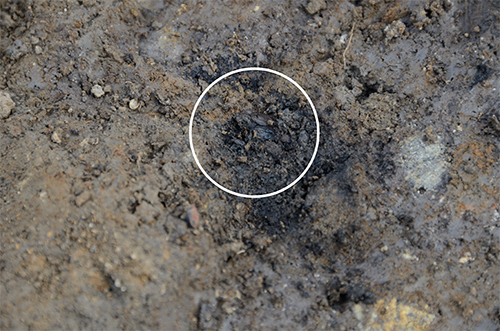 Recovered carbonized rice  Both hulled rice and rice on the stalk are found at the same spot. Rice still on the stalk is thought to have been spread over the floor of the warehouse to help keep the stored grain from rotting. 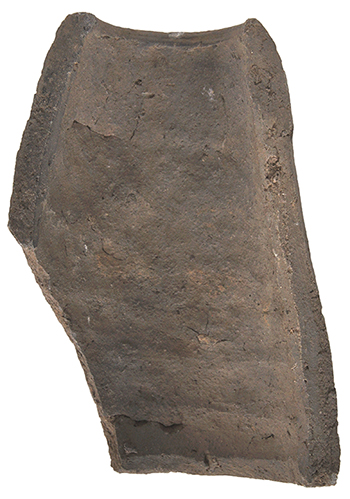 Round tile  This was made in the same fashion as clay pots, by piling up coils of clay into the desired shape. This shows that it was not tile-making specialists, but rather Sue ware potters who did the work. Length: 22.3 cm; width: 14 cm; height: 6.8 cm. 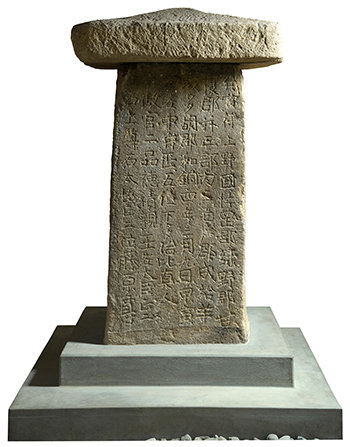 An impressive granary displaying the power of Ancient Tago District

The designated Historic Site, Kōzuke Province Tago District Shōsō Site, is situated within a broad valley opened up by the Kabura River, a Tone River branch, in the southern part of Takasaki City in Gunma Prefecture. As this is the location of the Tago Stele, memorializing the establishment of Tago District of the Ancient province of Kōzuke (modern Gunma Prefecture), it has been surmised as the site of the former district headquarters. As a result of excavations conducted by the Takasaki City Board of Education from 2011, a group of large-scale buildings that stood on pillar base stones was found, regarded as comprising a shōsō (official warehouse) complex. The shōsō was a facility of the district government, a granary for storing the rice and other grains paid as tax.

Among the features discovered in the excavation, one that drew particular attention was a large-scale building 16.8 m east–west by 7.2 m north–south. Found with massive base stones lined up in orderly fashion, large amounts of roof tiles were recovered from the surrounding area. From the type and amount of tiles, the structure is thought to have been an exceedingly high status warehouse called hōsō, having a roof entirely furnished with tiles, which was extremely rare at the time. This is the first confirmation of an Ancient period tiled warehouse within Gunma Prefecture. As the ancient state was at that time advancing a military policy of annexing the Tōhoku region, it is thought to have built this impressive granary to enhance the state’s authority.

Clues to the establishment of Ancient Tago District

Other shōsō structures with pillar base stones have been ascertained within the site, and it is surmised that rows of warehouses stood in formation. These buildings were surrounded by a ditch dug in line with the four cardinal directions, forming a warehouse complex approximately 210 m square.

The tiles that roofed the hōsō were produced within Tago District, and eaves tiles made with the same mold have also been recovered from the site of the Kōzuke Kokubunji temple remains (a Historic Site). These tiles may hold clues to the system of handicraft production of the Ancient district of Tago, as well as to the real facts behind the establishment of Tago District itself.

The Tago Stele is situated at a point approximately 350 m due north from the northern edge of the district warehouse complex. As both were produced in the eighth century, this strongly suggests that the stele and the warehouses were deployed in planned fashion.

Ancient Tago is considered to have been a rare district nationwide, set up with the assignment of immigrants during the formative period of the ancient state. That the district headquarters have been found is of extreme significance for understanding Ancient Japanese history, and draws attention for further elevating the historic value of the Tago Stele, a memorial to the district’s establishment. (Takizawa Tadashi)