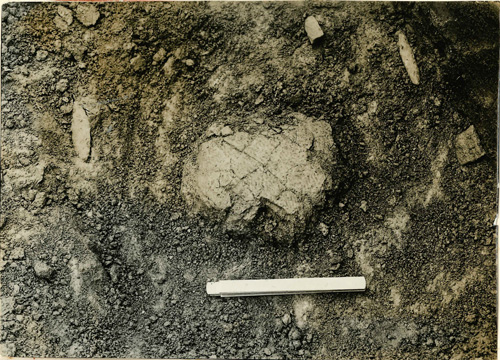 Spear point and pottery in situ  Opinions of investigators Serizawa Chōsuke and Yamanouchi Sugao were opposed as to whether or not the spear points were of the Jōmon period. That sparked the “Motonoki debate” concerning Jōmon period origins. The arrow indicates a spear point.

A wide variety of stone tools were recovered in large amounts, beginning with 1,082 spear points. Nearly all were of materials obtainable in the vicinity.
1. Spear points  These items are characterized by the parallel sides of their long and narrow blades. This shape is called the “Motonoki-type point.” Many are found broken. In the photo only the item at the very left is enlarged (length: 18.5 cm; width: 1.9 cm; thickness: 0.9 cm).
2. Spear points  In addition to the narrow items there are wider points of a type called “leaf-shaped.”
3. End scrapers  These are thought to have been possibly used in processing leather.
4. Notched scrapers  One of the stone tools characterizing the Motonoki site. Opinions hold they were used for shaping spear shafts or in activities such as leather processing.
5. Stone axe  In addition to the theory of this item being a stone axe, there is also the view of it as a partially processed spear point. 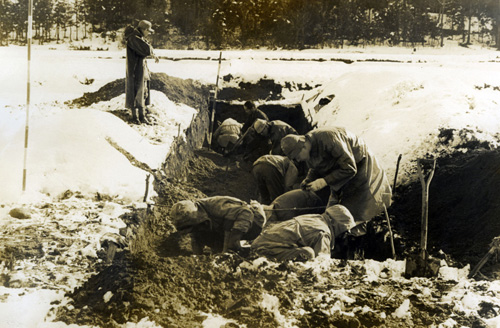 Excavation No. 1, December 1956  Conducted in the midst of accumulated snow. Giving directions from above the trench is Serizawa Chōsuke. 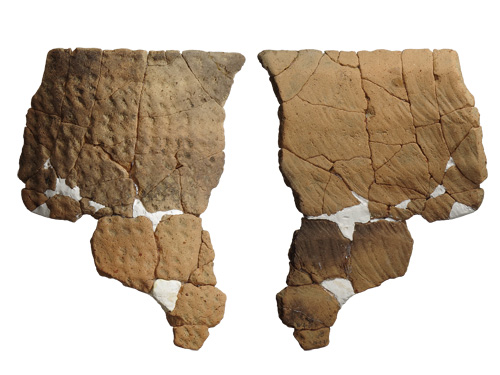 Impressed cord mark (ōatsu) Jōmon pottery  Pottery with a decoration made by pressing a twisted cord onto the side of the vessel. 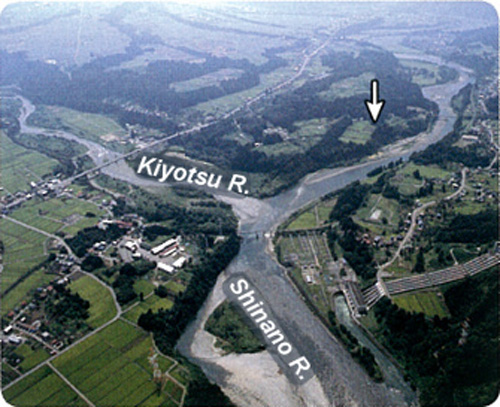 Distant view of the site (photo courtesy of Tokamachi City Museum)  The Motonoki site (arrow) is located at the confluence of the Shinano and Kiyotsu rivers. Approximately 20 sites of the Incipient Jōmon period are concentrated in this region. Moreover, a trend for locations at low-lying terraces near rivers is strong, thought to reflect a livelihood based on fishing at the time. Adapted from Hakkutsu sareta Nihon rettō 2018 [Excavations in the Japanese Archipelago, 2018] (Bunkachō [Agency for Cultural Affairs], ed., Kyodo News, 2018).

A historic site telling the dawn of the Jōmon period

The “Motonoki debate” that shook Japanese archaeology
The Motonoki site is located atop a terrace on the southern side of the confluence of the Shinano and Kiyotsu rivers. Tsunan Town is famous as a region where terrace topography is well developed.
Excavation at the Motonoki site goes back to latter half of the 1950s. At the time, the nature of the oldest Jōmon pottery was being pursued in Jōmon research. Also, the issue of whether a Paleolithic period existed in the Japanese archipelago was still being debated, even though the Iwajuku site which ultimately proved that existence had been excavated in 1949–50. The site excavated regarding the start of the Jōmon period by two scholars who built the foundation of Japanese archaeology was Motonoki.
In 1956, the first to excavate this site was Serizawa Chōsuke of Meiji University, who was striving to be the leading force in research on the Paleolithic period. Serizawa thought that in addition to the Jōmon period there had also been a preceramic culture preceding it in the Japanese archipelago. As the result of excavation, in addition to mostly finds of numerous stone spear points thought to have been used for hunting, a “unique” type of pottery was also recovered. From the conditions in which they were found, Serizawa thought the stone spear points and pottery were unrelated, and concluded from the shape and production technology of the former that they represented a “preceramic culture.”
Meanwhile, the preeminent figure in Jōmon pottery research, Yamanouchi Sugao of Tokyo University, who expressed a different opinion on preceramic culture, conducted an excavation in 1957 at a location adjacent to the area of Serizawa’s investigation. As a result, since in like manner vast numbers of spear points were recovered along with small amounts of pottery, Yamanouchi took these as being of the same period, and appraised the site as belonging to the Jōmon period. This was the start of the “Motonoki debate” famous in Japanese archaeology.