Hoard of coins
Discovered in a pit roughly 1 m in diameter, dug about 80 cm down from the Medieval living surface. In the Medieval period, according to a customary commercial practice called shōbyaku, a bundle of 97 coins tied with straw rope passed through their central holes, called sashizeni, was treated as 100 coins. The coins in this jar maintained this form, and were further seen to be bundled into more precious units of currency called jukkanmonzashi (10,000-coin strings). 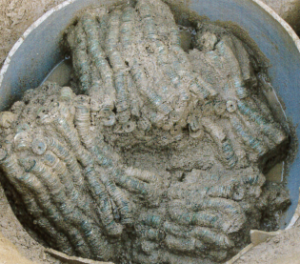 As the upper surface of the coins was covered with a thin strip of Japanese cedar, they are thought to have been buried with a cedar board placed as a lid. 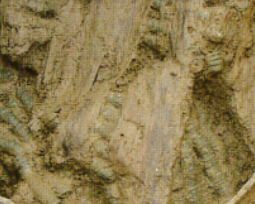 Distant view of the site (from the west)
The Nakazu Mansion is located on an alluvial plain in the coastal portion of the city of Iwakuni, Yamaguchi prefecture. Flowing to the north and south of the site is the Nishiki river, just before it empties into the Seto Inland Sea (towards the back of the photo). In the first half of the fourteenth century, which is regarded as its peak period, the coastline is thought to have been 500 to 600 m to the site’s east. 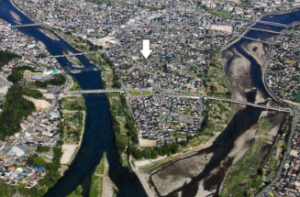 Map of the excavated areas
A trapezoid-shaped rampart encircled the mansion, and even now its base survives (yellow portions). The rampart is 15–20 m wide, and approximately 120–140 m east–west by 130–170 m north–south in scale. Within the mansion, in addition to dwellings, it is thought that facilities were set up for the conduct of governing and for greeting visitors. The hoard of coins was found at the location of the star (★). Adapted from Hakkutsu sareta Nihon rettō 2016 [Excavations in the Japanese Archipelago, 2016] (Bunkachō [Agency for Cultural Affairs], ed., Kyodo News, 2016). 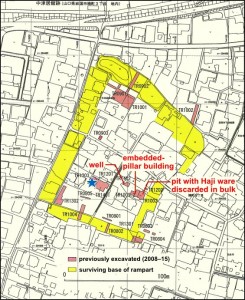 Rampart
The rampart was sturdily built, with large volumes of granite blocks the size an adult would carry using both arms packed into the fill at the outer side (to the back of the photo), to protect it from erosion. Adapted from Hakkutsu sareta Nihon rettō 2016 [Excavations in the Japanese Archipelago, 2016] (Bunkachō [Agency for Cultural Affairs], ed., Kyodo News, 2016). 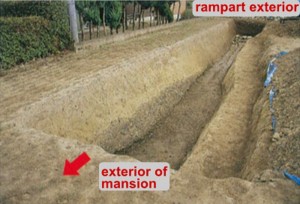 Moat-shaped feature
Outside the northern rampart, traces of the ground being greatly dug down were found. Beneath the ground surface near the outer side of the rampart itself, the rampart’s base which had been reinforced with large stones was also ascertained. Adapted from Hakkutsu sareta Nihon rettō 2016 [Excavations in the Japanese Archipelago, 2016] (Bunkachō [Agency for Cultural Affairs], ed., Kyodo News, 2016). 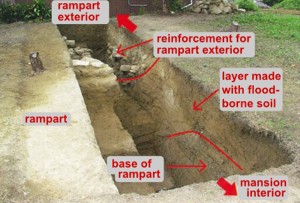 Pit where pottery was discarded in bulk, and a pillar base stone
Around 70 items of Haji ware dishes and small plates were discarded at a single location. As these were found at the same place as a large-scale embedded pillar building, in a feature regarded as immediately postdating the building’s dismantling, they are thought to have possibly been thrown out in conjunction with a rite attending the building’s abandonment. 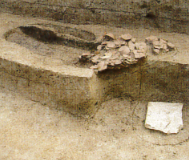 The deposited coins are estimated at 40,000 to 50,000 pieces (perhaps equivalent in today’s money to 4–5 million Japanese Yen). The total weight including the jar is 245 kg. There are no signs of ritual being conducted, and as the coins were placed haphazardly in a broken jar, they are thought to have been reserve funds that were buried as savings. 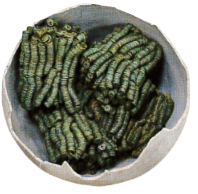 Sashizeni (stringed coins)
Ninety-seven coins strung together with straw rope. One hundred of these together formed a bundle treated as 10,000 coins, while 80 comprised an 8,000-coin bundle.

The Nakazu Mansion site is located on an alluvial plain formed at the mouth of the Nishiki river, in the coastal portion of the city of Iwakuni, Yamaguchi prefecture. Based on excavation, it has been learned that this mansion was in active use from the end of the thirteenth to the fourteenth centuries

In the fourteenth century, this region was part of Suō province (the eastern portion of modern Yamaguchi prefecture), under the control of the Ōuchi family who served as provincial military governors. The Ōuchi built their vast military governor headquarters (the Ōuchi Mansion site) in the modern city of Yamaguchi, but the Nakazu Mansion site, at 20,000 m2 in area, was on a scale rivaling the Ōuchi Mansion site itself. Regarding the figures who built the Nakazu Mansion, the theory that Hironaka family, who were Ōuchi retainers based in Iwakuni, is most likely.

Even now the base of the earthen rampart survives around nearly all of the circumference at the Nakazu Mansion site. As a result of investigations, it has become clear that the rampart was built very sturdily in the shape of a dike, with a fill of gravel and silt and large granite blocks piled up on the outer side. Beyond the rampart a moat-shaped depression has been confirmed, regarded as the result of digging up dirt for the rampart’s fill. Within the Nakazu Mansion, a large-scale embedded-pillar building, a pit where Haji ware was discarded in bulk, and a well have been detected.

Additionally, near the center of the mansion a single hoard consisting of a huge amount of imported coins, stashed in a Bizen ware jar and buried, was discovered. The date of manufacture for the jar is regarded as the late thirteenth to early fourteenth centuries, with a diameter for the body of about 65 cm and the rim portion broken. The coins placed inside are estimated at between 40,000 and 50,000 pieces, and were bundled together into strings, the form called sashizeni used for their circulation at the time, made by passing straw rope through the coins’ central holes, and at least two sets each of bundles of 10,000 coins (jukkanmonzashi) and 8,000 coins (hachikanmonzashi) can be confirmed. Since the newest type among the coins that have been identified is the Zhi Da Tong Bao of the Chinese Yuan dynasty, which was minted from 1310 on, the jar is thought to have been buried by around the mid-fourteenth century.

Iwakuni is located at to the border with ancient Aki province, and while it was a stronghold of the Ōuchi domain, its history for the Medieval period has not been well understood. The Nakazu Mansion excavation is bringing clarification to that period bit by bit. (Kanzaki Susumu)