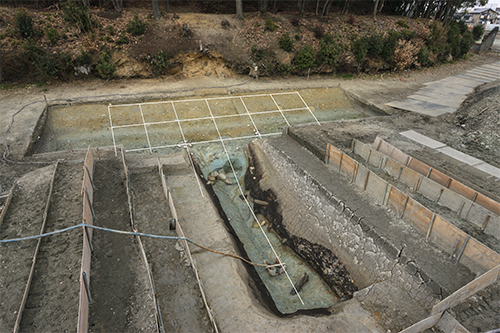 Wooden bridge feature, in situ (near the round portion of the mound, from the southeast)  The bluish portions are post holes. Seven rows of post holes were lined up in orderly fashion, with intervals between posts ranging 1.6–2.2 m in the north–south direction, and 1.5–1.8 m east–west. In the post hole at the forefront of the photo, a portion survives of a pile that was not completely removed. 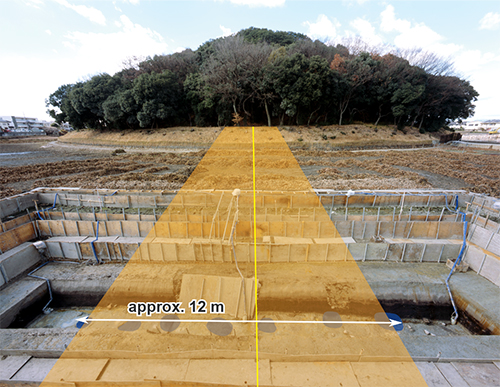 Wooden bridge position (from the east)  At the back of the photo is the round portion of the mound. The orange band is the inferred position of the wooden bridge. The blue spots are post holes for the bridge piles, and the yellow line is the main axis of the tomb. Adapted from Hakkutsu sareta Nihon rettō 2020 [Excavations in the Japanese Archipelago, 2020] (Bunkachō [Agency for Cultural Affairs], ed., Kyodo News, 2020). 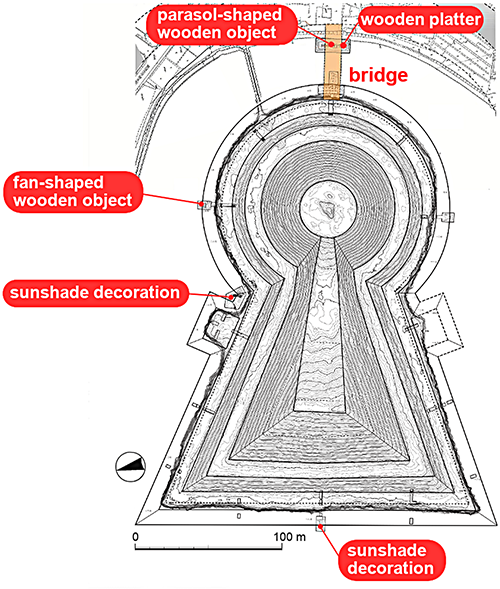 A huge wooden bridge for funerary rites at a king’s tomb is discovered!

Located on a tableland overlooking Osaka Bay, the Mozu Tomb Group (Historic Site) is composed of kofun (tombs) of various sizes starting with the largest one in Japan, Nintoku Tennōryō Kofun, built from the latter half of the fourth to the first half of the sixth centuries, and is thought to have been a cemetery for the Yamato polity. In July 2019, it was inscribed on the World Cultural Heritage list together with the Furuichi Tomb Group lying 10 km to the east. Nisanzai Kofun is a large-scale keyhole-shaped mound sitting at the southeastern edge of the Mozu Tomb Group, the third largest tomb in the group, and seventh for Japan as a whole. It boasts the grandest scale nationwide for all tombs built in the same period, and as it can be assessed as the newest of the colossal keyhole tombs in the group, it is thought to represent the last of the kingly graves of the Mozu Tomb Group.

At present, the mound is under the custody of the Imperial Household Agency as a tomb possibly connected with the imperial line, whereas the surrounding moat portion is under the management of the city of Sakai. Excavations were conducted by the city from the 2012 to 2015 fiscal years, centering on the inner moat towards the side of the mound, and during the first year an investigation was carried out simultaneously by the Imperial Household Agency as well.

Discovery of a huge wooden bridge spanning the moat

The following are among the facts that were clarified as a result of the investigations.  (1) The overall length of the mound is 300.3 m. (2) The period of construction was the mid-fifth century. (3) The slope of the first tier of the mound was unpaved or only sparsely paved with cobbles, indicating that the trend towards sparing effort in tomb construction had begun. (4) From within the moat, in addition to ceramic haniwa many wooden implements were recovered, including fin-shaped decorations for a ceremonial sunshade, objects shaped like ceremonial fans and parasols, a wooden serving platter and a spade; thus along with haniwa, wooden sculptures had been lined up on the mound and atop the ramparts, and rituals utilizing wooden implements had been conducted.

Worthy of special note among the finds, there were seven rows of postholes found in the inner moat, and a wooden bridge spanning the moat was thus clarified. The bridge lay along the main axis of the mound, and its scale is estimated to have been approximately 12 m wide and stretching 55 m in length. Intentionally removed after but a brief period, it is thought to have been built to cross the moat in conjunction with funerary rites, and after serving a vital role as staging apparatus for those rites, it was promptly removed once they had ended.

In this manner it was possible to obtain valuable results allowing a glimpse of one bit of the funerary rites conducted at a colossal mound thought to be a kingly tomb. (Uchimoto Katsuhiko)