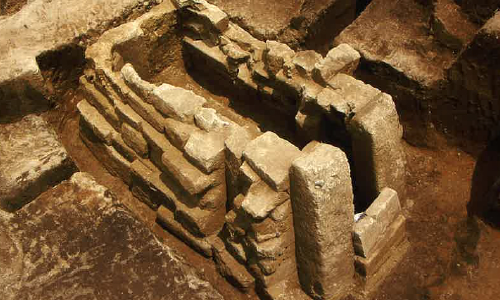 Burial facility (from the southwest)
While entirely made of white clay, the structure is no different from a chamber built with stone as the material. The burial chamber has  corbeled walls in which the clay blocks were stacked further inward towards the top. At the time of the excavation, the ceiling had collapsed into the chamber interior. 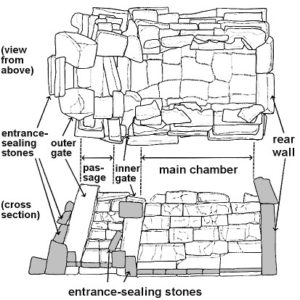 Drawings of the burial facility
Although names normally used for portions of stone chambers are shown, the material is not stone but clay. Adapted from Hakkutsu sareta Nihon rettō 2017 [Excavations in the Japanese Archipelago, 2017] (Bunkachō [Agency for Cultural Affairs], ed., Kyodo News, 2017). 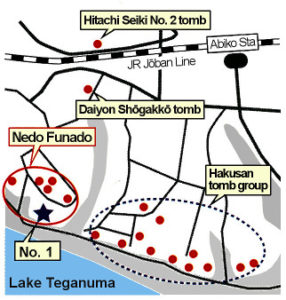 Distribution of tombs in the vicinity
The Hakusan tomb group is composed of 12 round mounds, while the Hitachi Seiki No. 2 and the Daiyon Shōgakkō tombs are keyhole mounds of around 30 m in overall length. All are small in scale, and like the tomb group at the Nedo Funado site are from the end of the sixth to the start of the seventh centuries. Adapted from Hakkutsu sareta Nihon rettō 2017 [Excavations in the Japanese Archipelago, 2017] (Bunkachō [Agency for Cultural Affairs], ed., Kyodo News, 2017).

No. 1 tomb mound (from the northeast)
The depth of the surrounding moat is uneven, ranging from 50 cm to 150 cm below the ground surface. While fill from digging the moat was piled up to make the tomb’s mound, in later periods this was cut back by cultivation, etc.

Sword with a bulbous pommel
Recovered from the burial chamber floor, near the western lateral wall. The handle, sword guard, and metal fittings attached to the scabbard were finished with gold plating. As such items are mainly recovered from tombs of the eastern provinces, they are thought to have been made by the Yamato polity for bestowing on powerful figures of those regions. Overall length: 105.4 cm; blade length: 72.1 cm; blade width: 3 cm. Adapted from Hakkutsu sareta Nihon rettō 2017 [Excavations in the Japanese Archipelago, 2017] (Bunkachō [Agency for Cultural Affairs], ed., Kyodo News, 2017).

Beads
The material is stone, including steatite, serpentinite, and chert.

Handle grip
In addition to a swirl pattern of incised dots, some gold still remains.

A rare sword from a Final Kofun period tomb

A burial facility made of clay

The Nedo Funado site is located at Hakusan in the city of Abiko, Chiba prefecture, at the edge of a tableland looking down on Lake Teganuma directly below. There are six mounded tombs (kofun) here, with Nos. 2–6 all being keyhole mounds having egg-shaped outlines said to resemble a Daruma doll. From the recovered Sue ware the tomb group is thought to have been built in the Final Kofun period (start of the seventh century).

In 2014 an excavation of the No. 1 tomb was conducted. The mound was similar in shape to Nos. 2–6, with an inferred length of about 35 m, and a height of approximately 2 m. A moat about 4 m wide partially surrounds the mound. The burial facility was fashioned with blocks of white clay, stacked as “stones” in the manner of a horizontal stone chamber 5.8 m in overall length. As the environs of Abiko city lack good stone material, it appears that blocks of the white clay lying beneath the Kanto loam were cut from an exposed cliff surface to use as a substitute. As the blocks sealing the entrances to the main burial chamber and the passageway (leading to the main chamber) showed signs of being re-stacked, it is thought that at least one subsequent burial had taken place.

Clay was also used in the shape of tiles to pave the floor of the main chamber, and grave goods were recovered that included three swords near the western lateral wall, another sword near the eastern lateral wall, approximately 120 iron arrowheads from near the northwestern rear wall, plus comma-shaped beads, small round beads, and cylindrical beads from the chamber floor. A very small portion of human remains were found, including teeth and bone.

A sword signaling a powerful figure

One of the swords was a gilted item decorated with gold plating, and having a fist-shaped bulbous pommel on the hilt. The grip of the hilt was worked with a pattern of swirls made of incised dots. At the time of discovery the pommel portion had come off and was lying in the northwest corner of the main chamber. Swords with bulbous pommels are found in tombs of powerful figures in the eastern provinces of Japan from the end of the sixth to the start of the seventh centuries, and the No. 1 tomb is thought to have been made around that time.

There are 12 examples for Chiba prefecture of finds of swords with bulbous pommels from Final Kofun tombs, all in regions such as the inner portion of Tokyo Bay and the eastern coast of the Bōsō peninsula, facing the Pacific. These are thought to be the graves of powerful figures, or of the groups they led, who were closely linked with the Yamato polity. In contrast, this is the first discovery of this type of sword within the city of Abiko. The largest keyhole-shaped tomb for the northwestern region of Chiba prefecture, Suijin’yama (overall length of 69 m), was built in Abiko at the end of the fourth century, but thereafter no outstanding tombs are seen in terms of either scale or content. Given those conditions, why would a sword with a bulbous pommel, proof of a person of power, be recovered from the No. 1 tomb at the Nedo Funado site? It promises to give an important hint for considering relations between the Yamato polity and regional powerful families. (Tsuji Shirō)