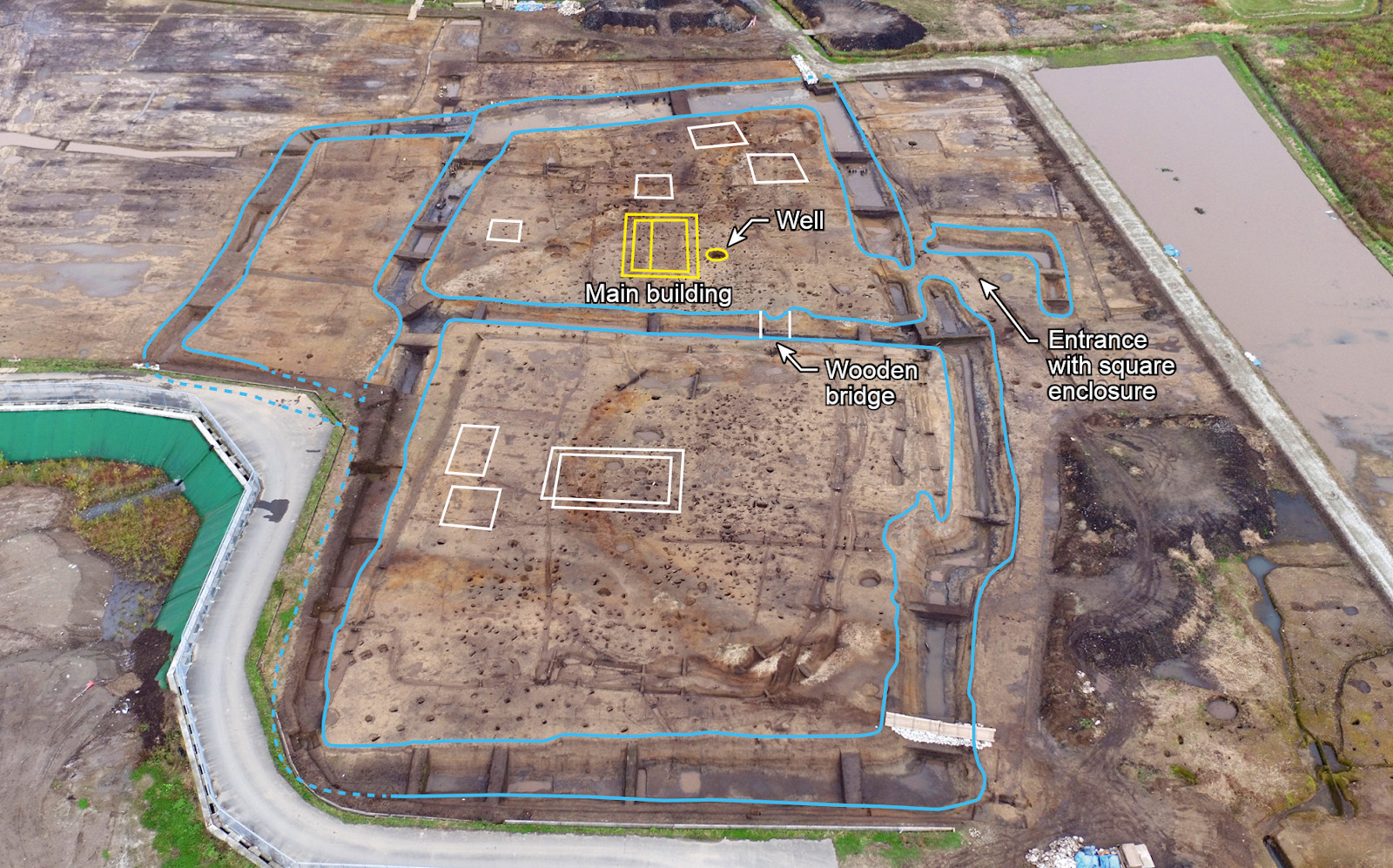 Overview of the residential grounds enclosed by a ditch (from the south)  The partition ditch was 4–8 m wide and 1–1.5 m deep. Within the partition, the white rectangles are structures thought to have stood at the same time as the main building. Adapted from Hakkutsu sareta Nihon rettō 2021 [Excavations in the Japanese Archipelago, 2021] (Bunkachō [Agency for Cultural Affairs], ed., Kyodo News, 2021). 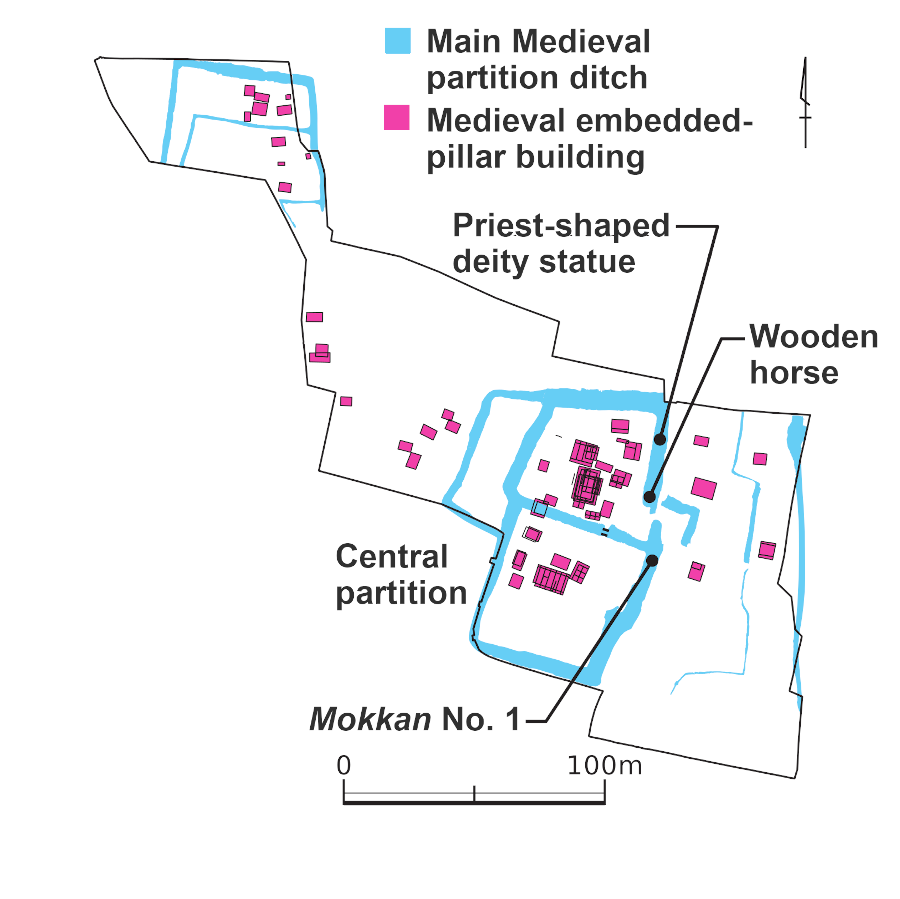 Plan of the entire excavation precinct  The rectangular partition on the northwest side has small-scale buildings and few recovered artifacts. Another partition possibly existed at the eastern edge of the excavation precinct. Adapted from Hakkutsu sareta Nihon rettō 2021 [Excavations in the Japanese Archipelago, 2021] (Bunkachō [Agency for Cultural Affairs], ed., Kyodo News, 2021).

Priest-shaped deity statue  With a tonsured head and plump ears, and lips alone painted red, the expression is gentle. One arm is folded over the other, and the figure is accompanied by a pedestal in the shape of a rock. Height: 20.3 cm; width: 4.5 cm; thickness: 2.5 cm. The wood is of the genus Salix (willow). 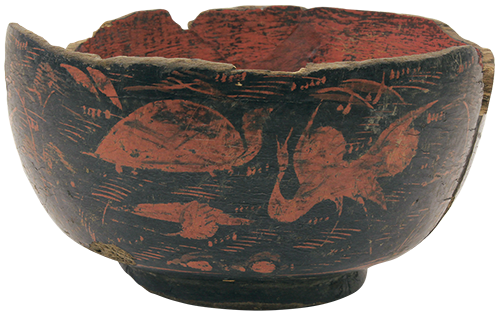 Lacquered bowl  A Hōrai design (depicting auspicious animals such as cranes and tortoises, etc.) is drawn in red lacquer. Holes were made on the side of the bowl, and it is thought to have been reutilized as a ladle. Surviving diameter: 15.6 cm; surviving height: 8.6 cm. The wood is of the genus Fagus (beech). 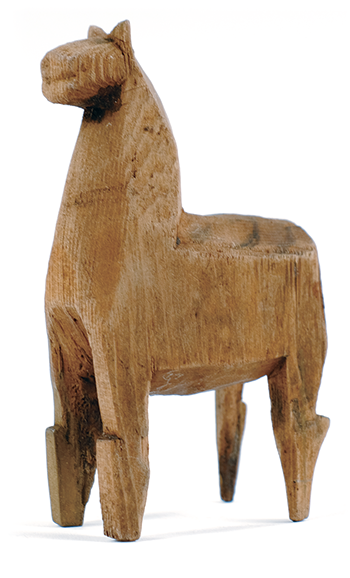 Wooden horse  The face, ears, and legs were carefully carved out with a sharp blade, and hair is depicted on the neck and back in ink. There is a slot in the buttocks, and it possibly had a depiction of a tail or an inserted attachment. Height: 9.6 cm; width: 5.2 cm; thickness: 3 cm. The wood is of the endemic conifer asunaro (genus Thujopsis).

A local lord’s manor at a strategic traffic location

The Ōminami site is located atop a natural levee on the east bank of the Tennō River, which flows through the northeastern portion of the city of Yonezawa. It lies on the route of the highway linking Yonezawa and Takahata in Yamagata Prefecture, at a strategic location near a point for crossing the Tennō River. In the 2016–2017 fiscal years, an area of approximately 25,300 m2 was excavated in conjunction with a project for preparation of the Asagawa landfill, and artifacts and features mainly from the Ancient through the Medieval periods were ascertained. Drawing attention among these are the grounds of a Medieval manor.

The central portion of the grounds is enclosed by a rectangular ditch approximately 60–86 m east–west by 110 m north–south, and this partition is further subdivided into two sectors by a ditch dug at its center. The rectangular partition ditch is interrupted at one spot, outside of which another L-shaped ditch was positioned, from which it is inferred to have been similar to a masugata koguchi, a type of castle entrance protected by a square enclosure. More than 25 embedded-pillar buildings from different periods were found within the rectangular partition. The largest of these, thought to have been the main building, was a high status structure measuring 12.6 m along the roof ridge by 8.6 m transversely, with projecting eaves (or perhaps verandas) on all four sides. From the recovered artifacts, the rectangular partition is thought to have been set up in the fifteenth century, functioning while expanding in area until the end of the sixteenth.

A priest-shaped deity statue is found, one of a handful of examples nationwide

From the rectangular partition ditch, beginning with locally made clay cooking pots with inside lugs, there were many wares recovered that were brought from distant places such as imported Chinese celadon and porcelain, and Seto stoneware from Mino, from which the lord of the manor’s abundant economic might can be glimpsed.

Particularly noteworthy are the many artifacts related to religious faith. The standing image of a deity in the form of a Buddhist priest is indicative of Shinto and Buddhist syncretism, and is an extremely rare example even on a nationwide scale. Mokkan (wooden document) No. 1 from the site, inscribed with “Eighteenth day Kanze Bosatsu” in ink, indicates that gatherings associated with the worship of the Kannon Bodhisattva and the jissainichi belief were held on the grounds of the residence. In addition, a great variety of wooden implements were recovered, including bowls and plates with auspicious animals such as cranes and tortoises drawn in red lacquer on a black lacquer base, a ladle, wooden clogs, a comb, a rolling board and spindle whorl used for spinning thread and other articles of daily use, plus a wooden horse thought to have been a toy.

While it has not been possible to identify the lord of the manor, as the area was the domain ruled by the Date clan, it is thought to have been a local powerful landowner having connections with the Date family. As documentary materials of this era showing the actual state of affairs for the region are extremely scarce, these may be called precious results for filling that void. (Satō Masayasu)