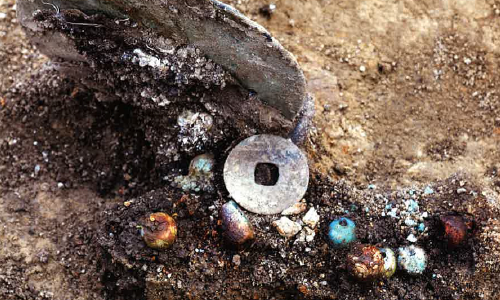 Bronze object in the shape of a sword guard, in situ
A Japanese mirror obtained from Honshu was refashioned as a sword guard, having the connotation in Ainu culture of warding off evil. It was recovered in an upright position from the grave of an adult female, together with glass beads and old coins.

Burial No. 1
The grave of an adult female, 2.3 m long by 0.9 m wide and 0.2 m deep. A bronze object in the shape of a sword guard, and beads and so forth were placed as grave goods. Earrings (ninkari in the Ainu language) were found towards the front of the photo, the location where the head is seen to have been placed.

Lacquerware
Decorated in overlapping fashion with a stamp depicting cranes. The diameter of the stamp was about 2 cm. Similar vessels have been recovered from the  Sasukegayatsu site in Kamakura, opening the possibility that this item is evidence of a link between the Medieval city of Kamakura and the northern regions.

Distant view of the site
Located among the hills of the upper Atsuma river basin (at the arrow). There are 23 sites from the Paleolithic to the Early Modern period in the environs.

Burial No. 1 mortuary item, tamasay
A necklace composed of one bronze object in the shape of a sword guard, 73 glass beads, five agate beads, 16 old coins, and one round disc made of tin. The bronze item shaped as a sword guard was refashioned from a Japanese mirror of the latter half of the twelfth century, and is 8.6 cm in diameter. The oblong agate beads are similar to items seen in Jurchen culture. 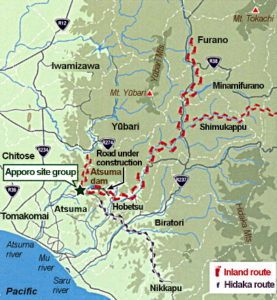 Path of the roughly 6,000-year-old inland route of Hokkaido
Jōmon pottery containing quartz crystals originating in the area around the Furano basin, and stone tools distributed in the middle reaches of the Ishikari river basin are found in the site’s environs, and the area is accordingly considered a strategic point in the communication linking northern and southern Hokkaido. Adapted from Hakkutsu sareta Nihon rettō 2017 [Excavations in the Japanese Archipelago, 2017] (Bunkachō [Agency for Cultural Affairs], ed., Kyodo News, 2017).

Ikayop
The inlay of silver discs 1 mm thick is a traditional technique of the Ainu. An ikayop (ceremonial quiver) with the same design is displayed at the Nibutani Ainu Culture Museum in Biratori Town. Length: 19.3 cm.

Burial No. 3 grave goods, in situ
The grave of an adult male. Eight swords including a Japanese sword plus Ainu swords and knives, and a ceremonial quiver (ikayop) decorated with silver, were recovered. The Japanese sword at the left edge of the photo is 77.5 cm long.

A trading base on Hokkaido’s inland route

The Onikishibe 2 site is in the upper basin of the Atsuma river, originating in the southern end of the Yūbari Mountains and flowing into the Pacific, and sits atop a riverside terrace touching the point of confluence with a tributary, the Onikishibe river. Discovered in conjunction with the Apporo dam construction project, it was investigated in excavations conducted in the 2007 and 2008 fiscal years. The upper Atsuma basin is regarded as a trading base on the Hokkaido inland route that has linked northern and southern Hokkaido since the Jōmon period of approximately 6,000 years ago. In the current investigation, a ground-level type of building (chise in the Ainu language) of the Medieval era Ainu Culture period (approximately 700 years ago), a deer sending site (having traces of a ritual in which the head of a deer was fêted, and spirits of deer that had been hunted respectfully sent back with gratitude to the realm of the deities), and four pit burials were discovered. The pit burials yielded numerous grave goods, turning out to be a precious discovery.

Traditions handed down to the present day

The finds from burial No. 1, of an adult female, included a bronze object in the shape of a sword guard refashioned from a Late Heian period mirror of Japanese manufacture, lacquerware decorated with the same stamped pattern of a pair of facing cranes known from finds at the Sasukegayatsu site in Kamakura and elsewhere, plus glass and agate beads of continental manufacture brought in by a northern route passing through Sakhalin. These artifacts indicate that the Ainu were engaged in active material exchanges with other regions, starting with Honshu. Also, the sword-guard-shaped bronze object was recovered together with items such as beads and old coins. This set is identical in composition to the tamasay necklaces highly valued by modern Ainu women, and tells the long history and culture of the Ainu people. In the same manner, among the items recovered from burial No. 3 of an adult male, together with a Japanese sword that was emblematic for a Japanese man, there were examples of the emush, the ceremonial sword most highly prized by Ainu men, and the ikayop, a decorative quiver for ritual use.

From the above, the Ainu of the Medieval era Ainu Culture period are seen as engaged in cultural exchanges with other peoples and actively adopting the products from other regions as well, while living alongside nature in Hokkaido. This is an extremely precious example giving a glimpse of Ainu spiritual culture, while showing that the Ainu have passed down their traditional culture for the long duration of more than 700 years. (Inui Tetsuya)