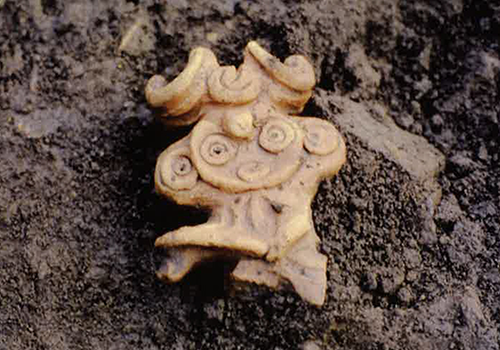 Mimizuku (“horned-owl”) clay figurine, in situ  Found as a fragment extending from the head to the right arm. Refitted with the left arm, and right and left legs, all separately discovered, the shape was almost completely reconstructed. 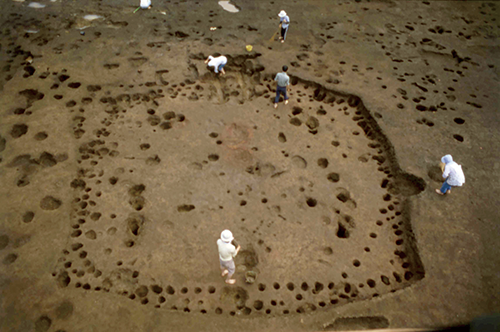 Pit-structure detected in the Miyamae sector of the site  This was rebuilt three times in the sequence of square → round → hexagonal shapes. 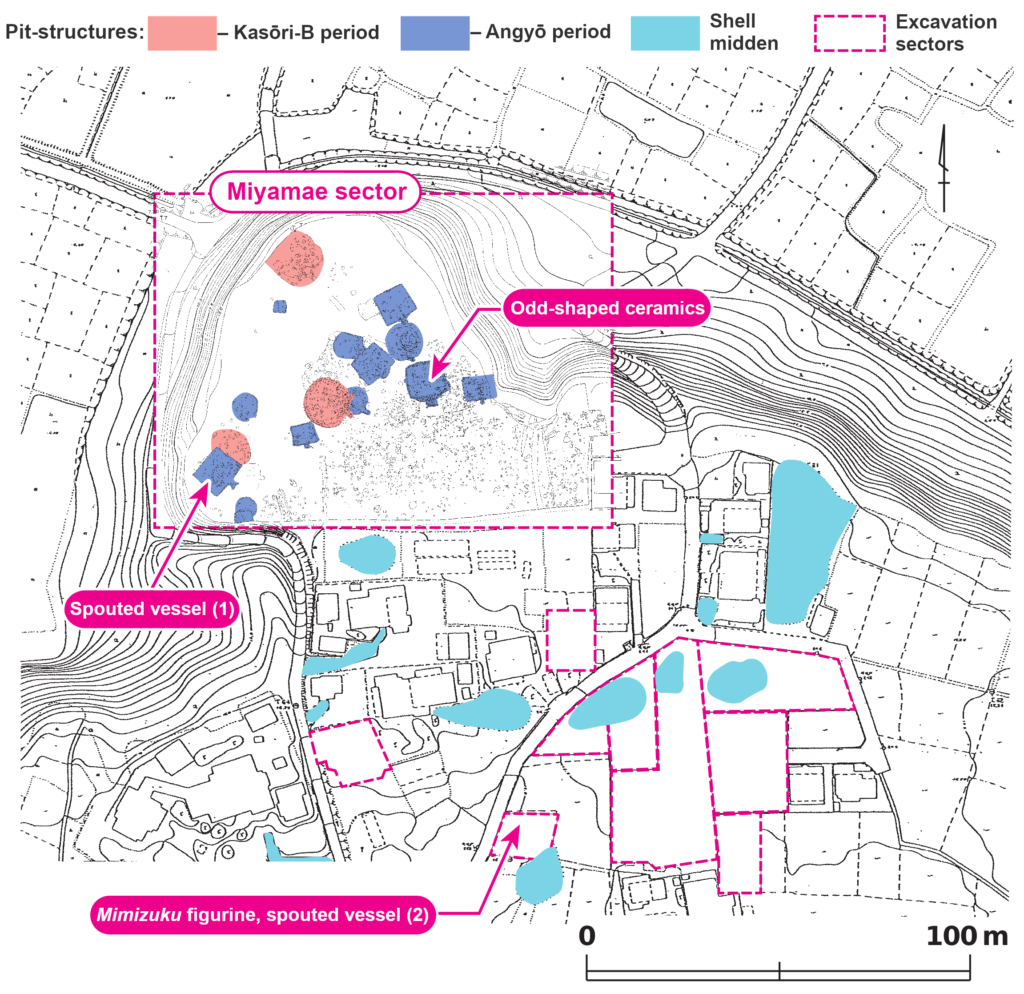 Map of the entire site  The distribution of pit-structures across the tip of a plateau can be seen. At present it is 1.3 km to the Tone River, but in the Jōmon period brackish waters spread very close to the site. Adapted from Hakkutsu sareta Nihon rettō 2021 [Excavations in the Japanese Archipelago, 2021] (Bunkachō [Agency for Cultural Affairs], ed., Kyodo News, 2021). 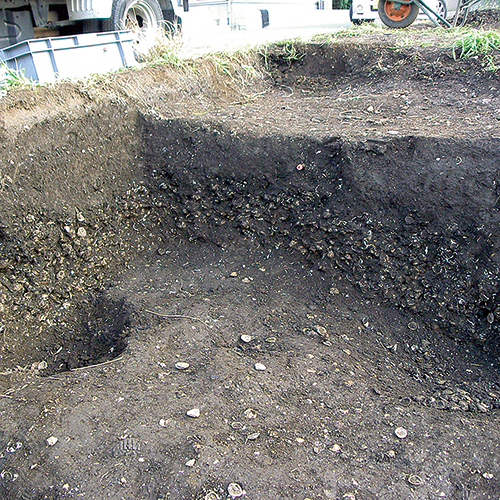 Shell midden in section  Beneath the surface layer of black soil mixed with shell, midden strata containing large amounts of shell can be discerned. 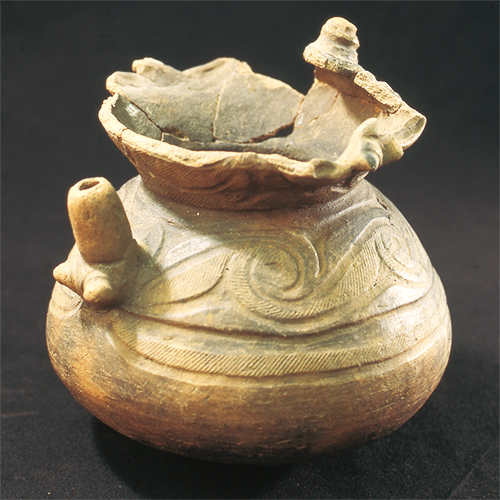 Spouted vessel (1)  The top portion has been damaged, but it is thought to have formed a canopy over the mouth, and to have had red painting. Height: 20.5 cm; body diameter: 21.5 cm. 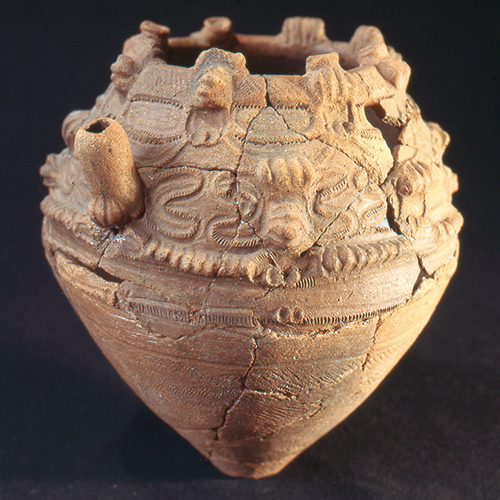 Spouted vessel (2)  A deep bowl which narrows toward the mouth is fitted with a spout. One other item with an identical shape and design composition was recovered. Height: 20.8 cm; body diameter: 23 cm.

Clay ear ornaments  Items with openwork carving, and those with finely sculpted shapes bridging the central opening, were not crafted within the settlement, but thought to have been brought from the outside. Diameters: 3.8–7.2 cm. 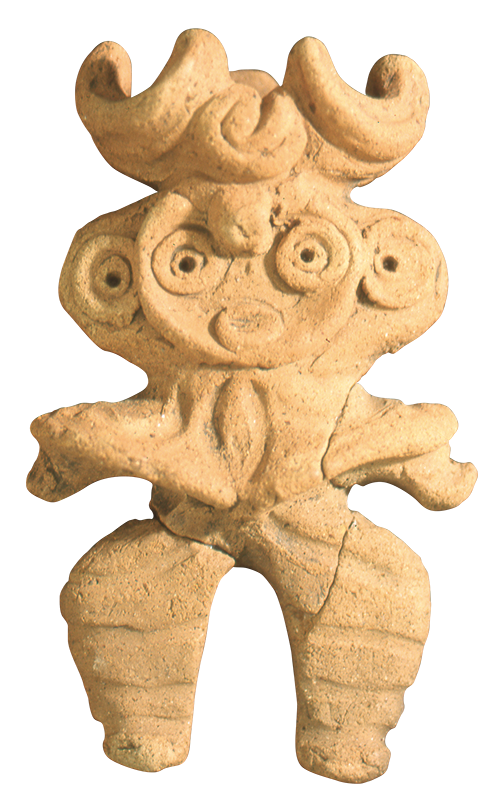 Mimizuku (“horned-owl”) clay figurine  While small in size, its fine workmanship exhibits a three-dimensional expression of a topknot tied up in a boat-like shape. Height: 15.5 cm; width: 9.8 cm; thickness: 5.5 cm.

Wolf mandible pendant  An accessory fashioned with holes made in a wolf’s mandible. Length: 14 cm.

A Late-Final Jōmon core settlement representative of the Hokusō region

The Sageto shell midden is the site of a settlement accompanying a shell midden formed from the Late into the Final phases of the Jōmon period. Located atop a plateau overlooking a lowland along the Tone River, a semi-circular shell midden opening to the north, along with 22 pit-structures and other features from the middle portion of the Late (Kasōri-B style period) to the middle portion of the Final (Angyō style period) Jōmon phases have been ascertained. The midden is comprised mainly of shell of the brackish water shijimi clam, so it is understood that in the Jōmon period seawater entered the Tone river system, forming a region of brackish water. With 12 excavations carried out from 1981 to the present day, it has become one of the representative sites of the Late to Final phases of the Jōmon period for the Hokusō region. Since 2013, the city of Abiko’s Board of Education has been conducting a review of the finds recovered from the Sageto shell midden for the purpose of publishing a site report, and the nature and special characteristics of the site have gradually become clear.

A complex spiritual culture is revealed by ritual artifacts

In addition to the pottery and stone tools used in daily life, special artifacts used in worship and ritual have been recovered in great numbers at the Sageto shell midden.

From the Miyamae sector of the site where the group of pit-structures was found, 469 clay ear ornaments have been recovered, one of the largest numbers of such finds for the Kantō region as a whole. It is of great interest that about 80 percent of these were recovered from within pit-structures, accompanied by special pottery such as miniatures and odd-shaped pedestaled ceramics, and are presumed to have been used within the residential space. On the other hand, a mimizuku (“horned-owl”) clay figurine that could be nearly perfectly reconstructed, and a clay slab with a molded human face were recovered from a separate sector of the site, and are thought to be artifacts related to worship conducted outdoors.

Regarding stone tools and utensils as well, in addition to hunting gear such as stone arrowheads, many implements related to ritual such as stone daggers, phallic stones, and vajra-shaped stones were found. Also, with the exception of a portion of stone materials such as chert and obsidian, as raw stone materials or unfinished stone products were not found, the Sageto shell midden site is thought to have been a locus of consumption rather than of manufacture for stone tools and utensils. As products of processing animal bone etc. into items of bone, antler, tusks, or teeth, a forked implement made of deer antler, and ornaments such as a pendant fashioned by making holes in a wolf’s mandible, were recovered.

The presence of a variety of artifacts related to ritual, such as pottery miniatures and odd-shaped pedestaled ceramics, clay objects including figurines and ear ornaments, stone items such as stone daggers and phallic rods, and items of bone and antler, give the impression that a highly developed spiritual culture was nurtured in society at the time. That the shape of daily life and the nature of ritual of people of the Late and Final Jōmon phases in the Hokusō region have thus become clear can be called and important outcome produced by this site.