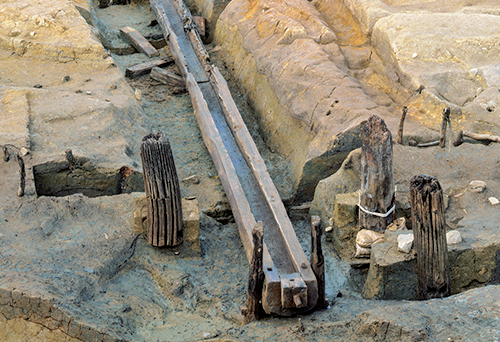 Wooden trough for drawing water from the pond (Phase 3)  In a good state of preservation, the structure of the intake portion etc. is readily understood. (Image courtesy of Archaeological Institute of Kashihara, Nara Prefecture) 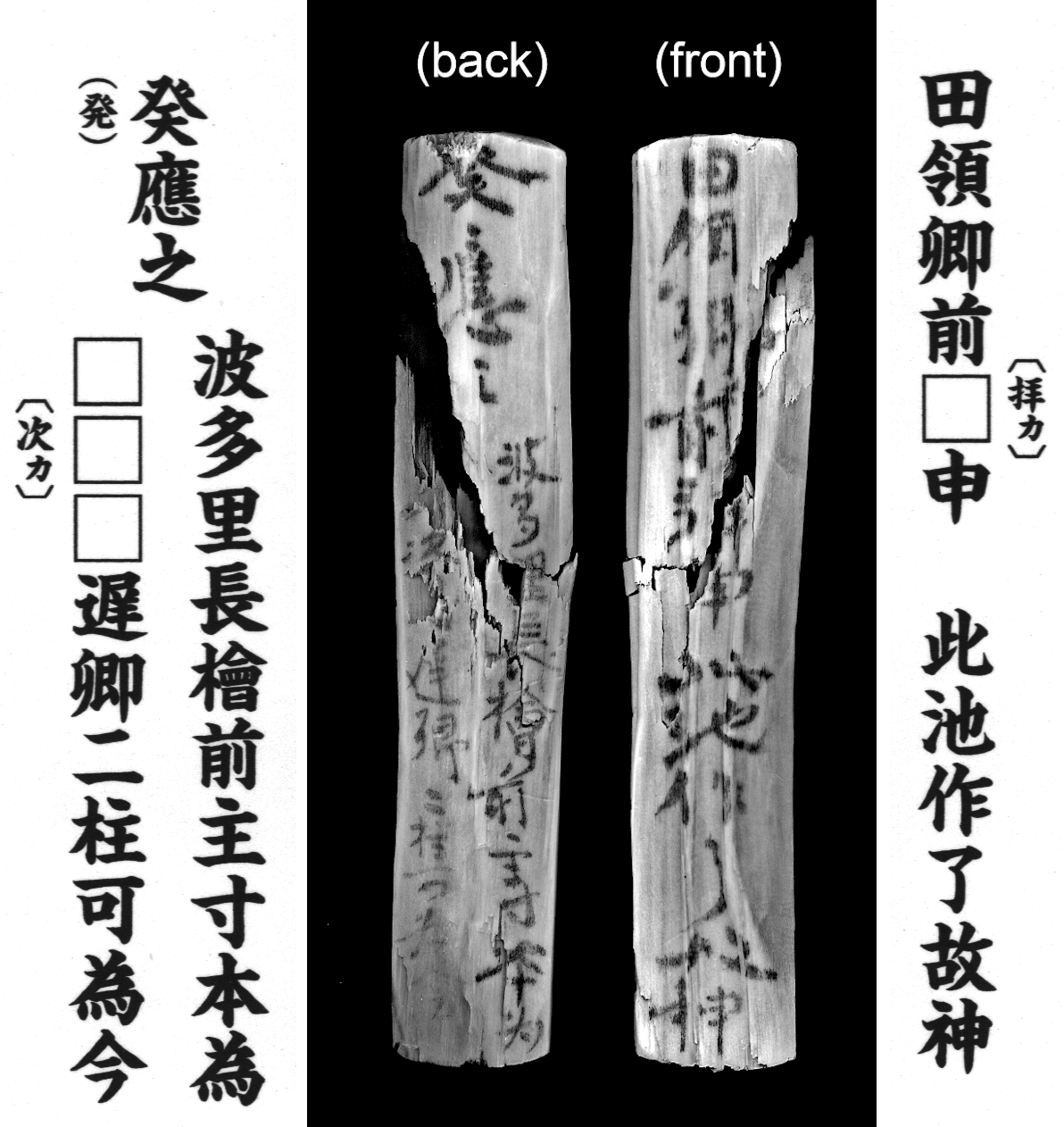 Mokkan (infrared photo)  The contents report the making of the pond to the denryō (a district official), with “The making of this pond finished. Then a deity appeared in response” written on the front, and on the back that the Hata Village chief Hinokuma no Suguri originally made the pond, which is now being operated by two others [names obscure]. It is a precious item clarifying who made the pond. Adapted from Hakkutsu sareta Nihon rettō 2021 [Excavations in the Japanese Archipelago, 2021] (Bunkachō [Agency for Cultural Affairs], ed., Kyodo News, 2021). (Image courtesy of Archaeological Institute of Kashihara, Nara Prefecture) 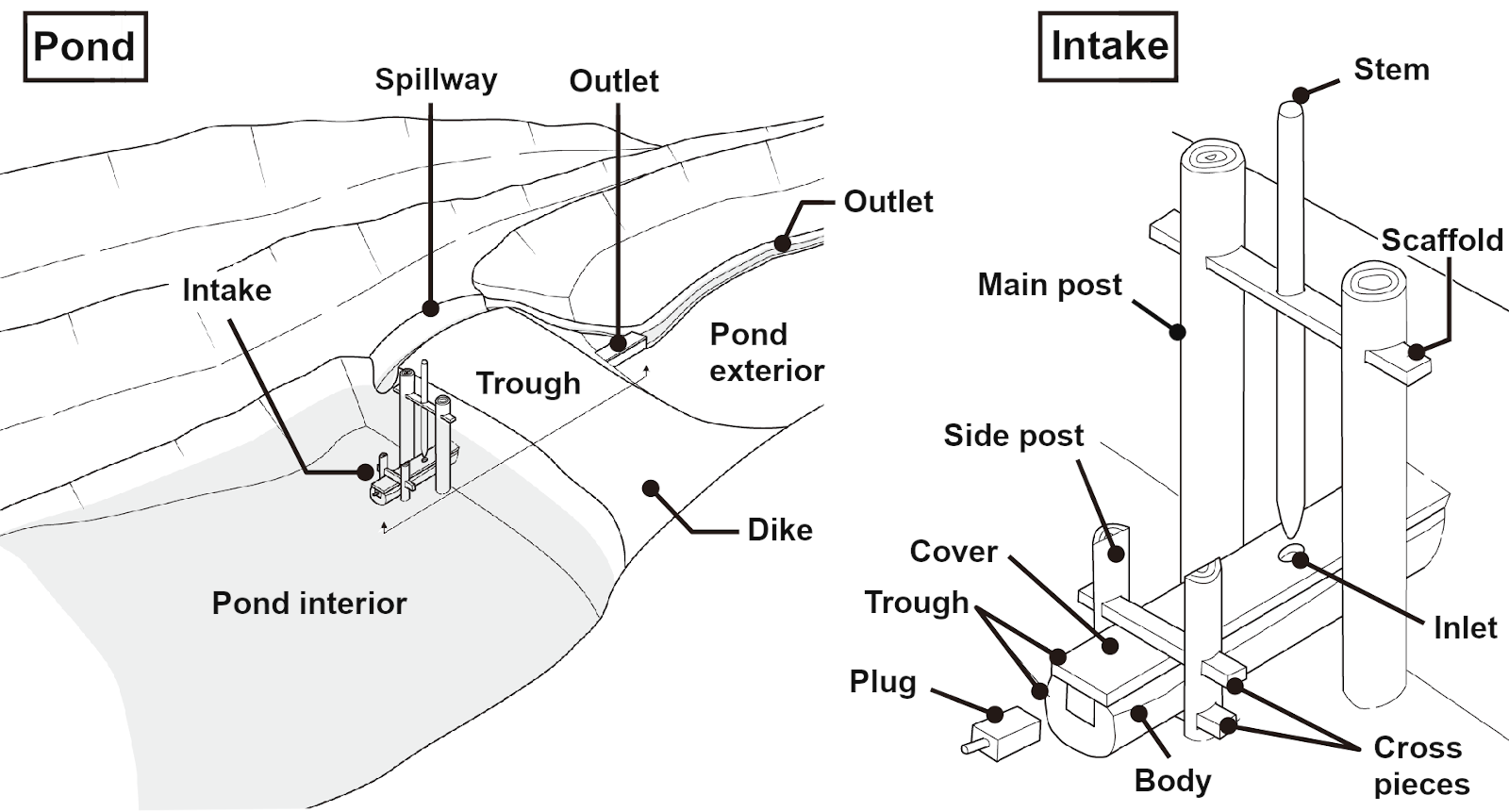 Schematic diagram of the pond and water intake facility  A spillway was made in the dike, keeping the water level constant. An outlet extended downstream, connecting the dike with cultivated land. Adapted from Hakkutsu sareta Nihon rettō 2021 [Excavations in the Japanese Archipelago, 2021] (Bunkachō [Agency for Cultural Affairs], ed., Kyodo News, 2021). (Image courtesy of Archaeological Institute of Kashihara, Nara Prefecture) 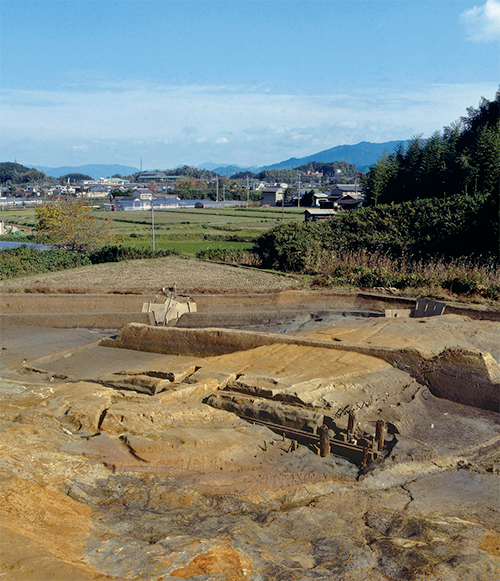 Overview of the dike (from the southwest)  The narrowest spot in the valley was chosen to build the dike. The area to the right is the reservoir, with water supplied to the left by flowing through the wooden trough. The trough of Phase 3 is visible in the photo. (Image courtesy of Archaeological Institute of Kashihara, Nara Prefecture)

Map of the inferred area of irrigation  Based on the watercourse of Nakatani pond (the modern reservoir) south of the site, the original area of irrigation was inferred. A watercourse extended west from the site, and the gentle slope from there to the Kibi River is thought to have been irrigated. Adapted from Hakkutsu sareta Nihon rettō 2021 [Excavations in the Japanese Archipelago, 2021] (Bunkachō [Agency for Cultural Affairs], ed., Kyodo News, 2021). (Image courtesy of Archaeological Institute of Kashihara, Nara Prefecture)

The Satsuma site lies in the southern portion of the Nara basin, at a point where its edge gradually rises from the plain towards the mountains. Excavation was carried out in conjunction with construction of the Takatori Bypass on National Route 169, and a pond built in the Ancient period was discovered.

This pond is regarded as having been for irrigation, and after being built at the end of the eighth to the start of the ninth centuries, it appears to have been maintained for 400 years, going through multiple repairs, until the start of the thirteenth century. A dike was built near the mouth of a valley, blocking the valley to fill it with water. A wooden trough was buried in the dike to serve as a culvert for drawing water. The dike was repaired at least three times to replace the culvert and so forth, and a total of four troughs were recovered. Of these, the trough from Phase 3 (end of the ninth to the first half of the tenth centuries) was in the best state of survival, and its entire shape is well understood.

Worthy of note is the discovery of a mokkan (wooden document) recording the name of the person who built the reservoir. A single mokkan was unearthed from within the pond, on which it is recorded that the head of Hata Village, a lineage member named Hinokuma no Suguri, constructed the pond. It is known that the place where the Satsuma site is located was called Hata Village in the Ancient period.

As examples of Ancient period reservoirs that have been excavated, there are Historic Site Sayama Pond (Osaka Prefecture), and the Ikeda (Fukuoka Prefecture) and Eibara (Hyōgo Prefecture) sites, where investigations have been carried out on dikes, culverts, and so forth. At the Satsuma site, in addition to these features, the bulk of the area that stored up water, and the watercourse conveying the water to the cultivated lands, etc.—all of the elements comprising the irrigation pond—could be investigated.

As a result, it is possible to reconstruct the scale and structure of the pond for each phase, and from the topography around the site the extent of irrigated land could be inferred. Thereby, it was possible to know concretely just how much area of arable land was developed by the village head at the time and the scale of the pond serving as water source. Not only that, by carefully reading the recovered mokkan, the efforts come into view that were made by local powers to prepare an irrigation source with personal funds, and take private ownership of the cultivated lands developed thereby. These findings may be called truly significant as an indication of the maturation of regional society. (Kitayama Mineo)