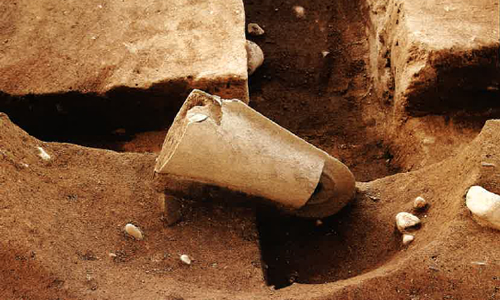 Dōtaku (bronze bell), in situ
The surviving portion of the hole in which it was buried was 79 cm east–west, 36 cm north–south, and 24 cm deep. It is regarded as having been elliptical. The dōtaku was possibly interred not long after the pit structure itself was buried between the end of the Middle to the start of the Late Yayoi periods. 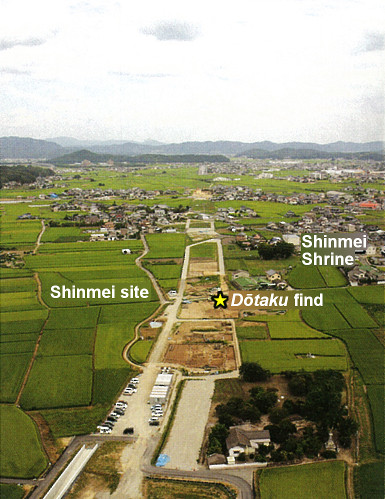 Area east of the dōtaku find
The ground forms a gentle slope, on which storage pits are concentrated.

Pit structure where counterweight-shaped baked clay objects were found
An elliptically shaped structure 6–7 m in diameter. This was newly discovered directly under the pit in which the dōtaku was buried.

Jar burial in situ
This was found on the western edge of the site, just east of the river. It is thought to have been a burial of a child.

Detection of the river
The river was 5–7 m wide, and 1 m deep. As no Yayoi period features are seen west of the river, it is inferred as the western limit of the settlement district.

Distant view of the site (from the west)
Crossing the Sōja plain in east–west fashion, an area of approximately 17,000 m2 was excavated. Adapted from Hakkutsu sareta Nihon rettō 2017 [Excavations in the Japanese Archipelago, 2017] (Bunkachō [Agency for Cultural Affairs], ed., Kyodo News, 2017).

From the western elevation
As multiple pit structures were erected in overlapping fashion in the vicinity of the dōtaku find, this is thought to have been the most suitable location for residence.

A dōtaku of many mysteries, discovered midst a settlement

A premier core settlement of the Kibi region

The Sōja plain and environs, lying some 15 km northwest of the Okayama city district, is dotted with many settlements of the Yayoi to Kofun periods, and may be called a “treasure house of archaeological sites” where numerous mounded tombs (kofun) were built including Historic Site Tsukuriyama Tomb, the fourth largest keyhole-shaped mound nationwide. In one corner of the northwest part of Sōja plain, excavation was conducted from 2014 in conjunction with the construction of a bypass for a national highway, and the existence of a large settlement of the Yayoi period came to light atop a natural levee formed by the Takahashi river and its tributary. The inferred extent of the site is 850 m east–west by 250 m north–south.

While only one bit of this vast site was investigated, there were 50 pit structures of the Yayoi period, two embedded-pillar buildings, and a jar burial, etc., spreading mainly over two elevated locations to the east and west. Pottery and other finds were recovered in large numbers and good condition, and it was learned that one of the premier core settlements of the Kibi region flourished here, centering on the latter half of the Middle to the Late Yayoi periods (approximately 2,100–1,800 years ago). For the pit structures, those ascertained on the western elevation from the end of the Middle to the start of the Late Yayoi periods were the oldest, after which the residential district appears to have expanded first to the eastern elevation, and then to the lower area lying in between. At the end of the Late Yayoi period, pit structures are seen scattered at the eastern end only.

A dōtaku is found in the settlement’s midst

One noteworthy result was a dōtaku (bronze bell) discovered in a buried condition. The dōtaku was found near the edge of the western elevation, the highest part of the settlement, laid on its side with the flange positioned vertically within a hole (a pit for its interment) dug in the remains of a pit structure itself buried around the start of the Late Yayoi period. While there are nearly 30 examples of dōtaku discoveries within Okayama prefecture, this was only the second item found during an excavation. It is a precious case which makes possible observing a dōtaku’s condition of burial in detail.

From the shape of the handle and the decorative pattern, the item is regarded as belonging to the older phase of the henpeichū type (in which the handle’s central portion is diamond-shaped in cross section, with an external flange extending around the entire bell, and an internal flange at the bell’s top) made in the latter half of the Middle Yayoi period. This is the first discovery of this type in the western part of the prefecture, and is highly significant for considering the nature of acceptance of dōtaku ritual in the Kibi region. Further, other examples sharing a flowing water pattern on the handle are very rare and consist only of two items from Osaka and one from Hyōgo prefectures, heightening interest in the locus of manufacture.

As previous finds of dōtaku are mostly accidental discoveries at locations other than settlement sites, it is rare for one to be found within a settlement in this manner. Curiosity as to why it was buried at this location goes unabated. (Watanabe Eriko)