Latter half, Muromachi–First half, Sengoku periods (first half, fifteenth–first half, sixteenth centuries)

View of the excavation (from the northwest)  Multiple large-scale embedded pillar buildings have been confirmed, with rebuilding inferred as occurring roughly six times. Visible in the background is the sacred peak, Mt. Nakui. 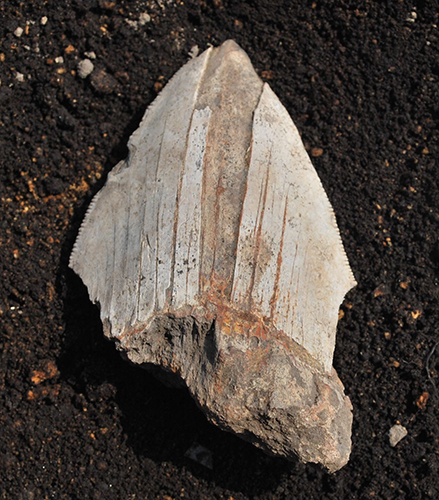 Fossilized giant shark’s tooth  A tooth of the extinct shark species megalodon (Carcharodon megalodon), which grew to a length of 12 m. Length: 8.8 cm. 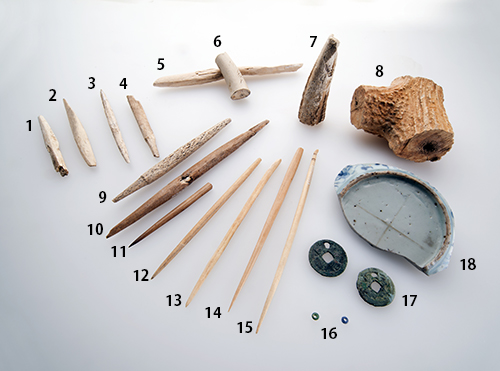 Recovered articles related to Ainu culture  Bone and antler implements such as arrowheads (1–3), tangs (4, 9, 10), and bone needles (11–15), deer antler as material for fashioning such items (6–8), plus glass beads (16), perforated coins thought to have been used as decoration (17), and a plate bearing an “×” mark (18), are all characteristic artifacts of Ainu culture. (Photos by Ogawa Tadahiro) 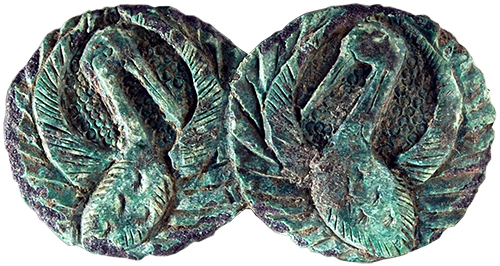 Clay object fashioned in the shape of a dog  Thought to have been a charm for inducing easy childbirth. Length: 6.8 cm.

Stronghold of the Nanbu clan, Daimyo of the Sengoku period

The Shōjujitate Historic Site was the residence of the Sannohe Nanbu clan, built atop a terrace on the north bank of the Mabechi River in the southeastern portion of Aomori Prefecture, located at a strategic point of transport at the junction of the Ōshūkaidō and Kazunokaidō roads. It was delineated with straight line moats running 300 m east–west on its northern side and 250 m north–south to its east, while the southwestern side was protected by a natural cliff 30 m high. The overall area of the fortified residence was approximately 90,000 m2, and in excavations conducted thus far an embedded pillar building of the largest scale for the Tōhoku region, extending 18 spans (36 m) north–south by 21 spans (42 m) east–west, plus a structure standing on pillar base stones thought to have been two stories tall, and a gate built with square pillars 45 cm on a side, have been confirmed. In the investigations of the 2019 fiscal year, on the northern side of the site a tamped-earthen bridge of the first half of the sixteenth century, and an entrance protected by a square enclosure (masugata koguchi) assessed as dating from the start of the sixteenth century and thus one of the oldest examples nationwide, have been detected.

The Shōjujitate residence is related to have burned in the eighth year of the Tenbun era (1539), and from within the site large amounts of glazed ceramics with signs of scorching, and carbonized materials have been recovered. From these artifacts and so forth it has become clear that the site was built in the first half of the fifteenth century, and served centrally for more than 100 years as the residence of the Sannohe Nanbu clan.

More than 4,000 items of Medieval glazed ceramics have been recovered from within the site, of which seven-tenths are Chinese glazed wares and three-tenths are Japanese products such as Seto and Mino wares, Echizen ware, and Shigaraki ware. There are many high quality ceramic examples such as lapis lazuli glazed items and celadon jars, which are thought to have served as symbols of authority. At the same time, only one example has been found of the small earthenware dishes used ritualistically at banquets by the ruling class of the time, and it is thought that this custom which had its origins in Kyoto had not been accepted here. In the environs of the central building of the residence, clay objects fashioned in the shape of a dog, thought to have been charms to bring about easy childbirth, and fossilized teeth of a gigantic extinct shark, which were prized and referred to as the “stone fingernails of a tengu (goblin),” were found.

Drawing attention are items thought to be related to Ainu culture, such as bone and antler implements or deer antler as material for fashioning such articles, perforated coins, and a blue-and-white plate with an “×” mark, which was used as a sign of ownership. Persons connected to Ainu culture had some manner of role within the residence, and it may be imagined that they resided there for limited periods.

In this manner it can be discerned from the items recovered at the Shōjujitate remains that the Muromachi and Sengoku period culture of the Japanese, centered on the capital, mixed together with the Ainu culture of the northern regions. It is a vital site for considerations of the movements of people and materials at the northern fringe of Medieval Japan, and of the Sengoku period history of the Tōhoku region. (Fuse Kazuhiro)