Clay mold for casting, in situ These pieces were found together in a pit, within a pit structure. The photo at left shows the clay mold and a halberd (replica) made from it. 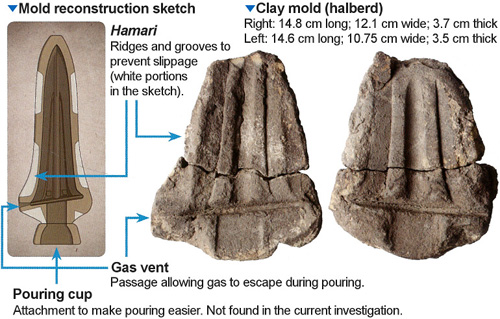 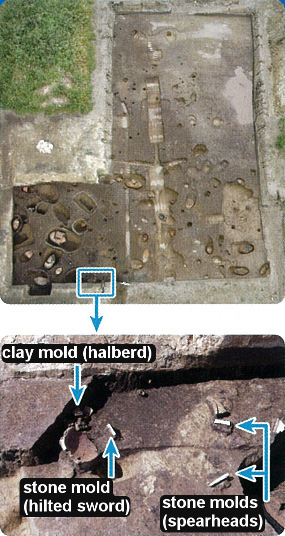 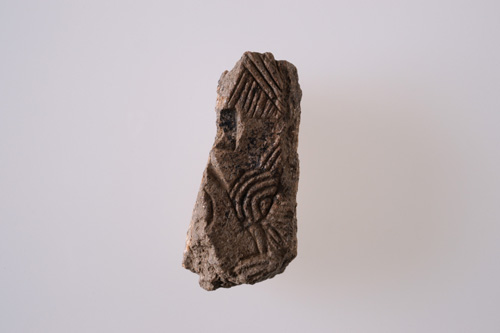 Stone casting mold for a multi-knobbed mirror From the design on the back, multi-knobbed mirrors divide into those with coarse and fine geometric designs, but this mold does not fit the traditional classification, and is thought possibly to have been produced independently in the Na polity region in imitation of mirrors of the Korean peninsula. Length: 5.4 cm; width: 2.6 cm; thickness: 2.4 cm. 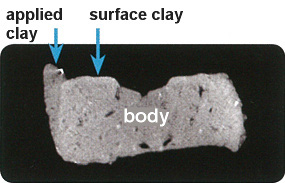 Cross-section of a mold as shown by X-ray CT scanner Clay at the surface is fine, but numerous holes can be seen within the body. Traces of clay applied to the outer surface are visible. (Photo courtesy of Kyushu Historical Museum) Adapted from Hakkutsu sareta Nihon rettō 2018 [Excavations in the Japanese Archipelago, 2018] (Bunkachō [Agency for Cultural Affairs], ed., Kyodo News, 2018). 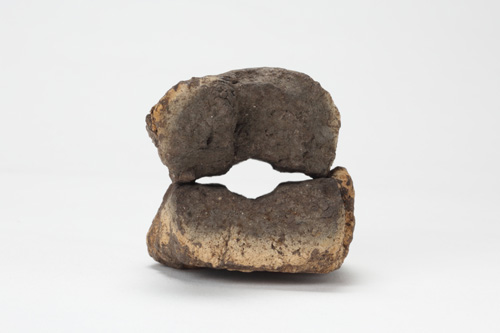 Clay mold for a bronze halberd or sword Looking at the cross-section of the pieces fitted together, the upper side has a rounded outline while the bottom side is square. 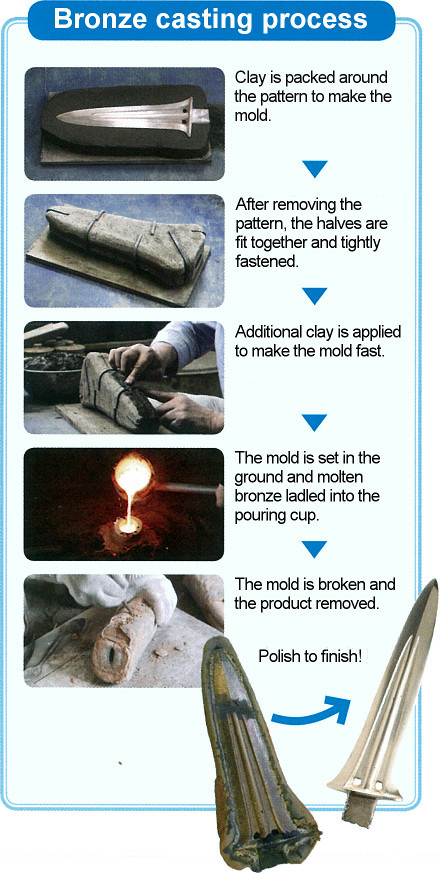 First domestic find of a mold for casting a multi-knobbed mirror
The Sugu site group, the central settlement of the kuni (polity) of Na recorded in the Wei Chronicle (Ch. Wei zhi), is located in the city of Kasuga, in Fukuoka prefecture. An excavation was conducted in 2014 at the Sugu Takauta site, in the northwest portion of this group, and a pit structure was found with a variety of molds for casting bronzes, such as swords, socketed pikes, halberds, small bells, and multi-knobbed mirrors, recovered from the vicinity.
The first item that draws attention is the mold for a multi-knobbed mirror. These are mirrors with two or three knobs on the back regarded as for passing a string, and this mold is the first of this type to be found in Japan. Multi-knobbed mirrors had previously been considered entirely of Korean peninsula manufacture, but with this discovery the possibility of domestic products being included has emerged. Apart from this, a mold for a hilted bronze sword of Korean style was also found domestically for the first time. These molds are made of stone, and the material is entirely of steatite or steatite schist. Based on naked-eye inspection, the material is thought perhaps to have been procured from the Korean peninsula, so it is possible that either molds made on the peninsula or the material for the molds were brought from there.

An epoch-making discovery of clay molds
In addition, the recovery of clay molds for casting at the Sugu Takauta site became a news topic. As clay molds must be broken when the cast products are removed, it was thought that these items would not survive.
A mold recovered for a Chinese-style halberd is made of two halves. Contrivances to hold the mold fast were observed, such as a belt-shaped depression about 1 cm wide thought to have come from binding the two halves together, and matching ridges and grooves called hamari to keep them in position. Copper, tin, and lead components were detected with X-ray fluorescence analysis, so it is thought that this mold was thus actually used for casting bronze implements.
The age of the mold is considered to be from the first half of the Middle Yayoi period (approximately 2,200 years ago) based on the pottery recovered with it, and this coincides with a time when settlements of the Sugu site group were expanding. Sugu Takauta is a site demonstrating that the oldest class of bronze implements were produced in earnest in the Na polity, and by making it possible to know the conditions at the time when bronze production began not only on the Fukuoka plain but within the archipelago as a whole, it is an extremely precious site. (Morii Chikako)