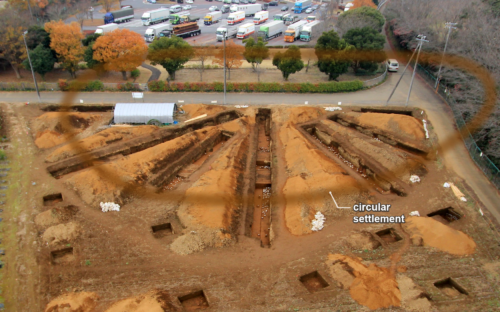 Panoramic view of the 2015 fiscal year investigation (from the east)   In order to ascertain the size and extent of the circular settlement, an excavation precinct was set up radiating out from the center. Adapted from Hakkutsu sareta Nihon rettō 2019 [Excavations in the Japanese Archipelago, 2019] (Bunkachō [Agency for Cultural Affairs], ed., Kyodo News, 2019). 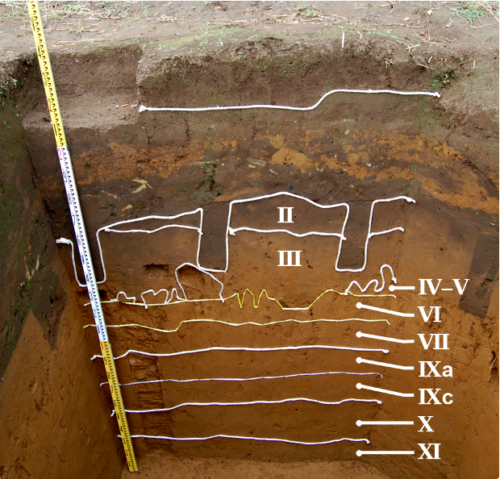 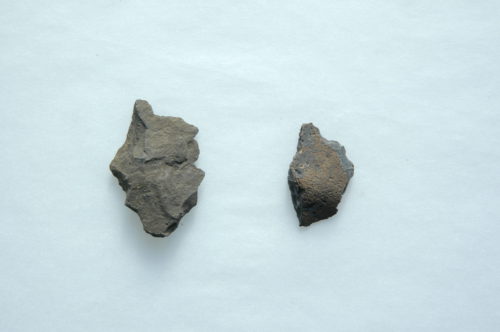 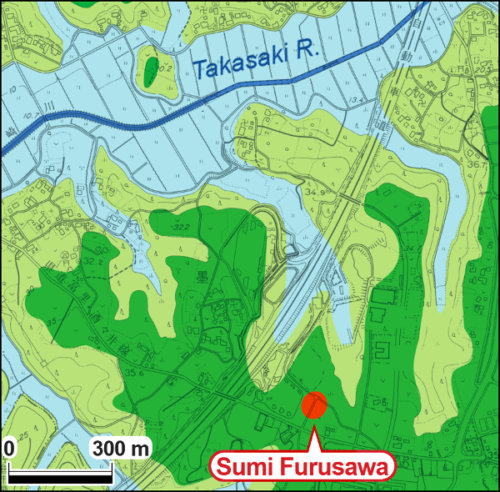 Site location  Near the center of Chiba Prefecture, the site lies atop a tableland of about 35 m elevation sandwiched between the Takasaki River, which flows into the Inba Lake, and one of its tributaries. There are numerous valleys in the vicinity with abundant spring water. Adapted from Hakkutsu sareta Nihon rettō 2019 [Excavations in the Japanese Archipelago, 2019] (Bunkachō [Agency for Cultural Affairs], ed., Kyodo News, 2019). 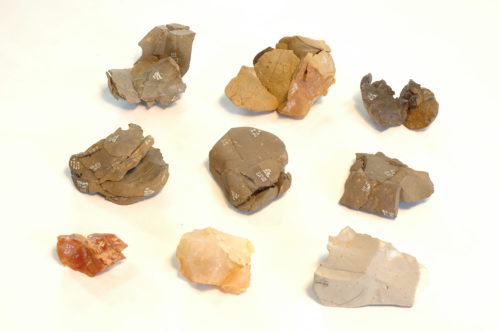 Refitted materials  These are examples of stone implements struck from the same stone fitting exactly together like the pieces of a puzzle. At the Sumi Furusawa site there are cases of items recovered from stone tool blocks as much as 30 m apart fitting together. The material is diverse, including glassy black andesite, chalcedony, toro-toro (a soft stone), and chert. Sizes range from 6.5 to 10.2 cm. 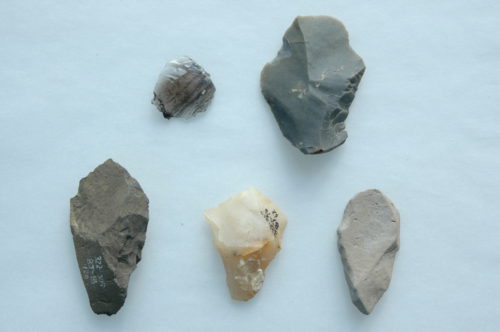 Trapezoid tools  Thought to have been the tips of hunting spears. For the people of the Paleolithic period who lived by hunting, tools used in hunting were extremely important. At the Sumi Furusawa site 2 backed knives and 71 trapezoid tools were discovered. The size range centers on 2.5–4.5 cm. 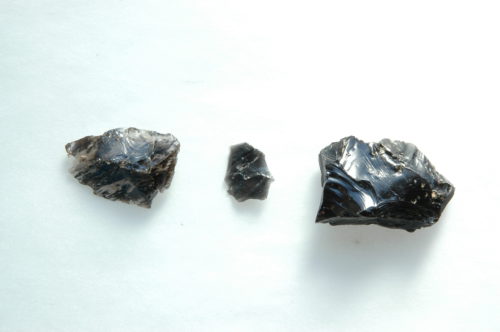 Obsidian  Much of the stone material came from considerable distances. From the left are products of Shinshū (from Suwa, in modern Nagano Prefecture), Kōzushima (an island in Tokyo Prefecture, but 50 km remote from mainland Honshu), and Tochigi Prefecture (Mt. Takahara). Lengths: 1.6 –2.2 cm. 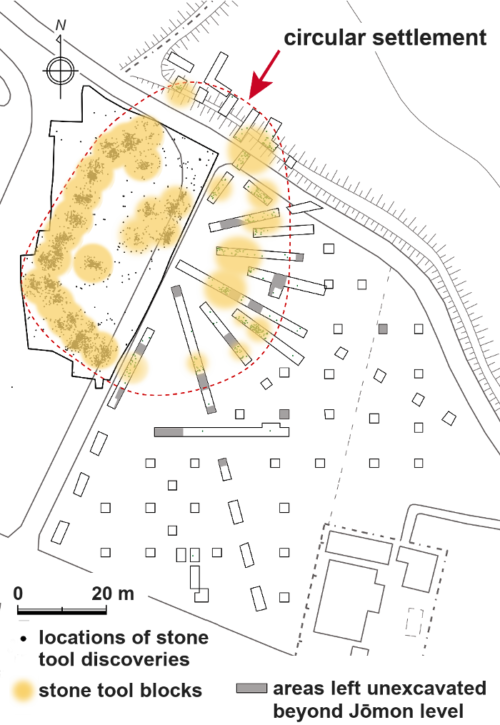 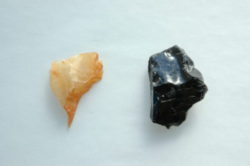 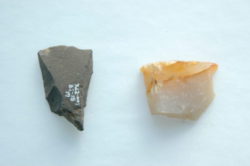 Stone drills (left) and side-scrapers (right)  Thought to be tools for making garments and utensils fashioned of wood or bone. Sizes: 3.5–4.1 cm. 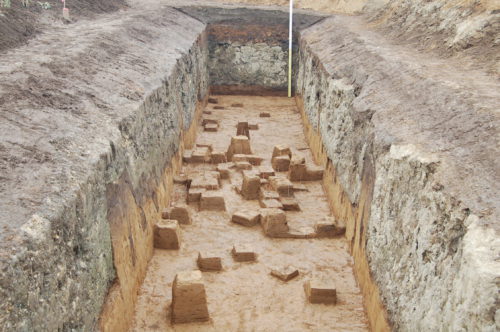 Stone tool block in situ  At Paleolithic sites, stone tool blocks are one of the few “archaeological features” indicating the traces of people’s daily life. As the feature would be destroyed if the stone tools were removed, the excavation proceeded while leaving the tools in place.

A Paleolithic settlement of the largest class in Japan

A 70 m long-diameter circular settlement
The Sumi Furusawa site is a large-scale settlement of the Paleolithic period, discovered during an excavation attending construction work to expand the Shisui Parking Area of the Higashi-Kantō Expressway.

Approximately 40 percent of the settlement was excavated on its western side at the time of discovery, while the remainder was judged as spreading outside the excavation area. Accordingly an excavation to ascertain the scale of the site was carried out in 2015–17, and it was learned that roughly 60 percent of the settlement overall remains in a good state of preservation.

As people of the Paleolithic period dwelled in simple tents, no building remains were found, but traces of daily life such as those left by stone tool making or campfires, and large numbers of stone tools were discovered. As “stone tool blocks” indicating the traces of stone tool making were found at 61 locations lined up to form a circle, the site is regarded as a large-scale settlement designated academically as a “circular settlement.” The scale reaches 70 m north–south and 60 m east–west in diameter, and is in the largest class in Japan as a settlement built at a single point in time for the Paleolithic period. It was likely made by people who gathered there to take advantage of the abundance of spring water in the environs, and of the animals drawn to the river. As a result of analysis for dating and identifying the tree species of charcoal grains taken from concentrations of carbonized materials, regarded as the remains of campfires, the settlement is seen to have been made about 34,000 years ago, in a more frigid natural environment than the present day.

A total of 4,386 stone tools were found. As the main tool types, along with backed knives and trapezoid tools thought to have been the tips of hunting spears, there were fragments of edge-polished axes for making tents, garments and other tools, plus side-scrapers, stone drills, and so forth. As stone material, glassy black andesite brought from Gunma Prefecture and elsewhere was widely used, and obsidian brought from as far away as Nagano Prefecture was also seen, attesting to the broad scope of the daily life and exchange of the people of that time.

Saving a Paleolithic settlement for the future
The “circular settlement” is a form of settlement only seen in the Japanese archipelago, prior to 30,000 years ago. Rare even on a worldwide scale, while 146 examples of this type of settlement have been found throughout Japan, nearly all have been destroyed in the course of excavations conducted in conjunction with development. In order to preserve the Paleolithic settlement at the Sumi Furusawa site, the unprecedented method of excavation was followed of leaving the stone tools in the ground as they were found, after recording their characteristics. Our thinking is that for the purpose of knowing our history, we wish to firmly protect, and transmit to the future, this site from the dawn of the Japanese archipelago. (Murai Hiromi)