Pit structure where the male clay figurine was found 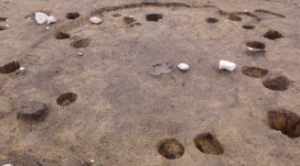 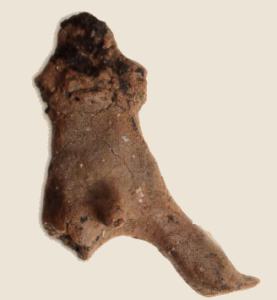 The many clay figurines that were recovered 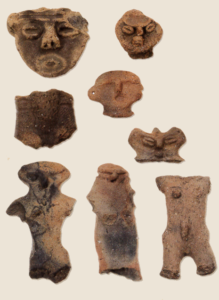 Panorama of the site (from the west)
It has been decided to preserve approximately 2,000 m2 on the western side of the excavation area, as parking space for the hotel. 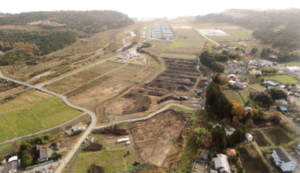 On the east side of the Tatsuta Station on the JR Jōban Line in the town of Naraha, as part of the reconstruction efforts following the Great East Japan Earthquake, site preparation work is being carried out for a hotel and dormitory for companies involved with nuclear decommissioning work. Prior to construction, what emerged from an archaeological excavation extending over approximately 4,000 m2 were the outlines of the Takahashi site, a core settlement from the Late to Final Jōmon periods. It is located atop a level terrace on the south bank of the Ide river, facing the Pacific ocean.

As a result of the investigation, the main finds included Jōmon period pit structures, a stone alignment, groups of large pillar holes, and buried pottery. The large pillar holes measured 1–1.5 m in diameter and 1 m or more in depth, and at their centers the traces left by pillars around 0.5 m in diameter were discerned. These are thought to have comprised embedded pillar buildings and rows of posts.

As artifacts, in addition to stone rods and double-edged clubs, 10 or more clay figurines have been found, and noteworthy among these is an item with a male form that was discovered in the fill covering a Late Jōmon period dwelling site. Similar examples of male clay figurines are few even on a nationwide scale, making this site extremely valuable for considering Jōmon culture of this region.

Cultural properties are at once both a precious heritage left by our forbears, and a source of reserve strength which instills local identity and the courage to rebuild. It is hoped that the current exhibit will provide those residents who even now are living in distant locations where they took refuge, plus those who are just beginning to engage in the work of reconstruction, an invaluable opportunity to think about their hometown’s history and future. (Sakamoto Kazuya)