Cross section of the soil strata.
Deposits from three separate periods, regarded as brought by tsunamis on the occasions of the Great East Japan Earthquake, the Keichō Sanriku Earthquake (1611), and the Jōgan Earthquake (869), are simultaneously visible. As the remains could not be preserved in situ, a lacquer peel profile was made of the section instead. 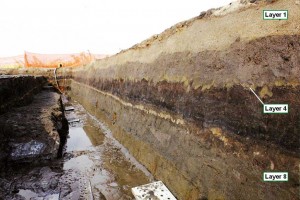 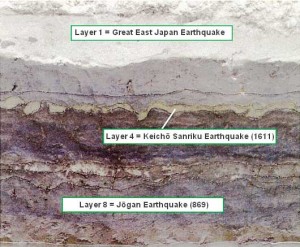 Hoofprints detected in Layer 4
The round gray portions are regarded as traces of where oxen or horses trod during the opening up of new rice paddy sometime in the Late Edo period. They were found on the upper surface of Layer 4. 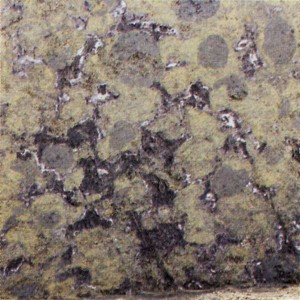 The Takaōse site is located approximately 1.2 km inland from the modern day coastline, atop a sand and gravel coastal barrier and the marsh spreading out to its back.

In July 2013, excavation was conducted in advance of construction of a water drainage facility, and from beneath the deposits left by the Great East Japan Earthquake, two strata of sand from different periods were found.

From factors such as the conditions of deposit of the soil, along with radiocarbon dating, these sandy strata are inferred to belong to the Edo (sixteenth–seventeenth centuries) and Heian (eighth–ninth centuries) periods. Further, as the eras in which they were formed could thus be specified, they are thought possibly to be sediments brought by tsunamis of the years Keichō 16 (1611; Layer 4) and Jōgan 11 (869; Layer 8), respectively. As previously there has been no single example in which tsunamis from three distinct periods, including that of the Great East Japan Earthquake, could be verified, these are extremely valuable data.

Also, with the detection among other things of traces of ground surface erosion due to tsunamis in the investigation of former paddy fields, significant information has been obtained that can lead to better prevention and lessening of disaster damage in the future. (Kawamata Takahisa)