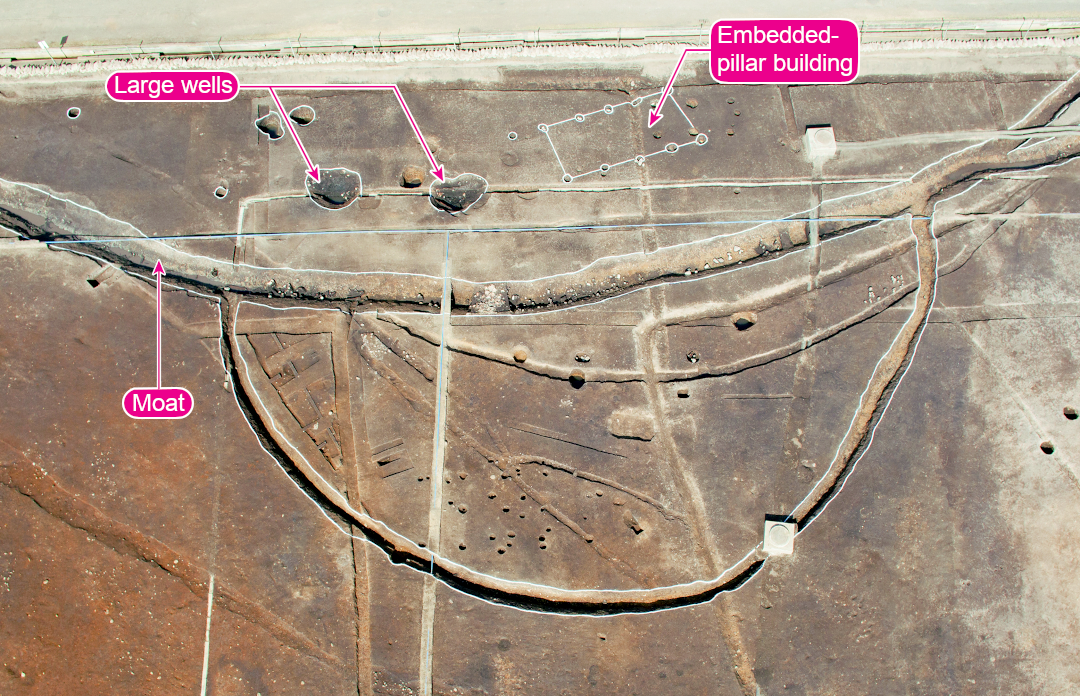 Semi-circular projection at the southern edge of the moat (from the south)  Inside the southern edge of the moat an embedded-pillar building measuring 7 m along the ridge stood in line with two large wells, possibly forming a ritual-related area that included the projection. Adapted from Hakkutsu sareta Nihon rettō 2021 [Excavations in the Japanese Archipelago, 2021] (Bunkachō [Agency for Cultural Affairs], ed., Kyodo News, 2021). (Image courtesy of Gunma Archaeological Research Foundation) 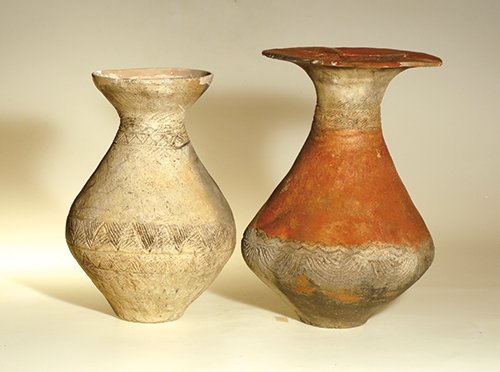 Red and white vases laid down a well  The red vase is derivative of the Kuribayashi style of Nagano Prefecture, and the white vase has the characteristics of local derivation. Both are beautifully decorated, and are representative items for Gunma Prefecture of the latter portion of the Middle Yayoi period. Item at left: 25 cm tall, 17.4 cm wide; item at right: 27.3 cm tall, 18.4 cm wide. (Image courtesy of Gunma Archaeological Research Foundation) 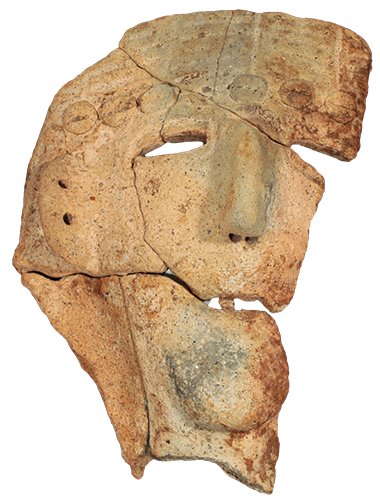 Face of a human-shaped vessel  The depiction of front teeth is the most prominent characteristic. The eyes drawn with double eyelids is a point in common with examples from Nagano Prefecture. The ear is pierced with holes, and a headband or hat-like covering is depicted on the head. Height: 15.5 cm; width: 11 cm. (Image courtesy of Gunma Archaeological Research Foundation) 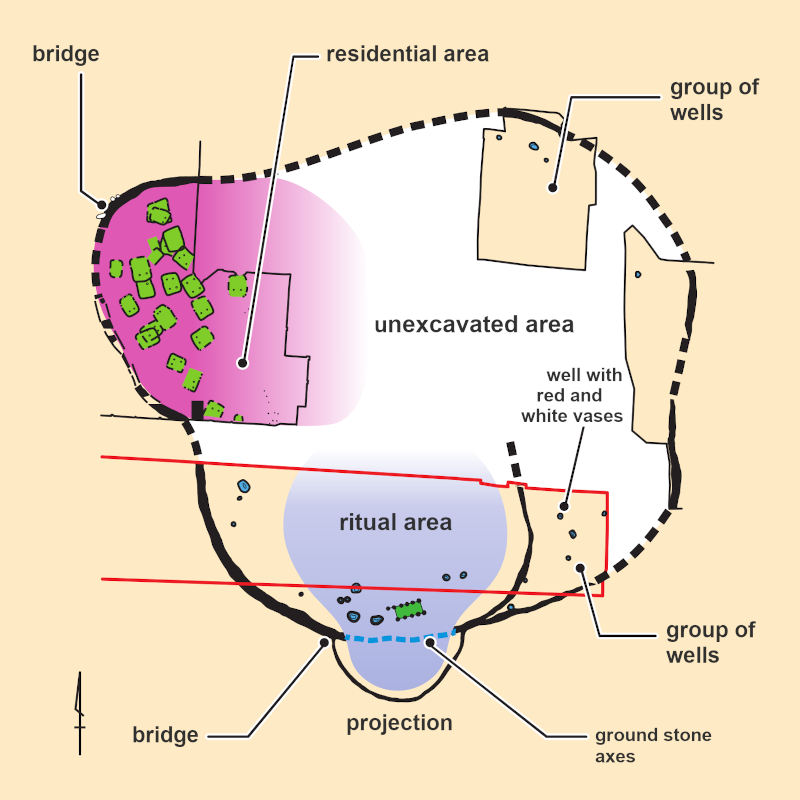 Plan of the entire moated settlement  The outline is in the shape of multiple overlaid circles. There are no wells in the residential area, and the ritual area lacks pit-structures. It is regarded as having bridges as entrances at northwest and southern points on the moat. Adapted from Hakkutsu sareta Nihon rettō 2021 [Excavations in the Japanese Archipelago, 2021] (Bunkachō [Agency for Cultural Affairs], ed., Kyodo News, 2021). (Image courtesy of Gunma Archaeological Research Foundation)

Ground stone axes  The second item from the left is a dark, square-shaped adze for woodworking, and the others are for felling trees. All are in a nearly unused condition, and are thought to have been buried as offerings to a deity. Length (from the left): 19.3 cm, 13.6 cm, 20 cm, 22.3 cm. (Image courtesy of Gunma Archaeological Research Foundation)

A moated settlement divided into areas by function

Semi-circular projection at a ritual area

The Takasaki Keibajō site is a moated settlement of the latter portion of the Middle Yayoi period, located on the plain stretching out on the eastern side of modern JR Takasaki Station, at the northeastern edge of the Kantō Plain. Prior to the construction of the Gunma Convention Center in conjunction with the demolition of the former race track (keibajō), excavation was conducted and a portion of the settlement was confirmed.

While the scale of the settlement was not very large, with an area of approximately 20,000 m2 and the moat’s diameter at 160 m, the distribution in separate areas within the settlement of features differing in nature, such as pit-structures and wells, is a prominent characteristic. The residential area is located in the settlement’s northwestern portion, and at least 25 pit-structures have been discovered. An embedded-pillar building regarded as a structure with an elevated floor is at the settlement’s southern edge, and 20 deeply-dug holes thought to be wells were distributed along the inner side of the moat except for the residential area. There is a semi-circular projection of 15 m radius made on the southern edge of the moat near the embedded-pillar building. No features have been found from within this semi-circular area, but from two large wells just to the west of the embedded-pillar building, charred animal bones and large amounts of pottery thought to have been used in ritual have been found. Also, the portion of the moat separating the semi-circular area from the embedded-pillar building and wells was filled in with large amounts of pottery and other materials, temporarily connecting the semi-circular space with these features. From these characteristics, this is thought to have been a ritual area.

A human-shaped vessel depicted with teeth

More than 10 examples of vase-shaped vessels with human features, modeled on Yayoi people, were recovered from the site. Among these are two rare items with depictions of teeth. Also, two red and white vases were found at the bottom of a well having been carefully laid down with their necks crossing one another. These two vases were the most beautifully decorated of all the pottery recovered from the site, and are thought to have been used in special rites offered to a deity.

These special recovered artifacts can be said to provide valuable hints for understanding the religious beliefs of Yayoi people. (Ōki Shin’ichirō)