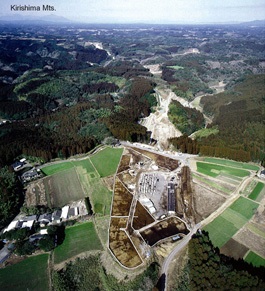 Distant view of the site (from the south)  The Tenjindan site is located atop a tableland approximately 200 m in elevation. At back left in the photo is the Kirishima mountain range. In conjunction with the construction of the Higashi Kyushu Expressway, many other sites were discovered on top of this tableland of the Ōsumi peninsula. Adapted from Hakkutsu sareta Nihon rettō 2018 [Excavations in the Japanese Archipelago, 2018] (Bunkachō [Agency for Cultural Affairs], ed., Kyodo News, 2018). 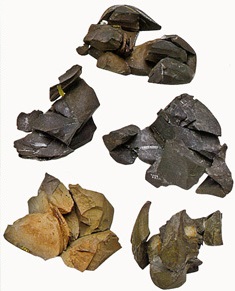 Representative refitted materials  Flakes produced from the same original stone and fitted together are called refitted materials. There were differences in the conditions of refitting depending on the age, as refitted materials from Layers 11–12 were found within relatively close spans of each other, but in Layers 9–10 items separated by 30 m or more were matched. 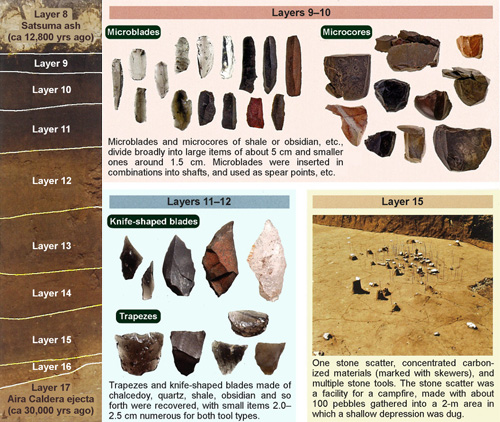 Refitted materials containing numerous stone tools  This set of refitted materials is fondly referred to among the investigators as omanjū (Chinese steamed bun). It consists of 24 flakes, among which six microblade cores are included. Diameter: 9 cm; thickness: 3 cm.

Numerous stone tools centered on microblades are recovered
The Tenjindan site is located atop a tableland approximately 200 m in elevation in the center of the Ōsumi peninsula, and numerous stone tools were recovered between the stratum of ejecta from the Aira Caldera eruption (commonly called shirasu) of about 30,000 years ago, and the Satsuma volcanic ash layer of approximately 12,800 years ago.
Traces of activity of Paleolithic people are discernible at three periods. The oldest of these is the bottommost Layer 15, with one stone scatter, one area of concentrated carbonized materials, and multiple stone tools being found. From Layers 11–12 toward the middle there were 10 stone scatters, and stone tools consisting of knife-shaped blades and ridged flaked points regarded as for hunting, and trapezes. The knife-shaped blades and trapezes are characterized as being mostly small in size, with the smallest among these only on the order of 1–2 cm. Artifacts of the newest strata, Layers 9–10, were most numerous, with one stone scatter, microblade cores and microblades, plus potsherds and stone arrow points also being recovered from strata approximately 30 cm thick, showing a continuation from the end of the Paleolithic to the Incipient Jōmon. The materials were mainly chalcedony and quartz, with locally produced obsidian and shale also used.

Efficient production matched to the stone material and shape
Of particular note are more than 400 sets of refitted materials that were obtained for the site as a whole. In particular, the technology for tool production with microblade cores could be seen as dividing largely into two types. One used obsidian as the raw material, making a single microblade core from a small-sized stone, while the other mainly used shale, splitting fist-sized stones to make multiple microcores. The former type was recovered from the site’s northeastern side and the latter from the southeastern side, and this variance in distribution according to the technological difference is thought to indicate the manner of utilizing space within the site.
Variety in the utilization of stone material is discernible at the Tenjindan site, and it is inferred that raw stone was widely brought from various locations in southern Kyushu. In addition to telling the expanse of the sphere of activity of people at the time, the artifacts also indicate the manner in which tool production efficiently matched the material and shape of the raw stone. These data may be called of precious value for learning the stone-tool-making technology of the hunters of this time who were thoroughly familiar with the nature of their stone materials. (Manabe Aya)