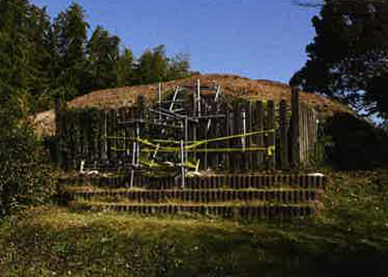 The situation in December 2016. As the stone fence erected around the mound has been collapsing, strengthening pressure on the gate at the entrance, the gate is being supported from the outside to prevent it from falling over. 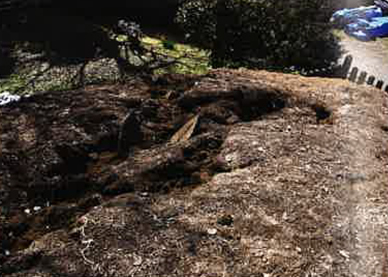 Multiple fissures run over the mound, which can be seen to be subsiding. 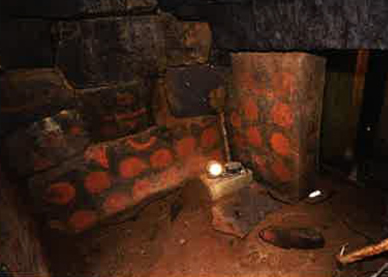 In addition to some of the stone material of the chamber peeling away and falling down,   dirt has flowed in through the crevices between the stones piled to make the chamber. 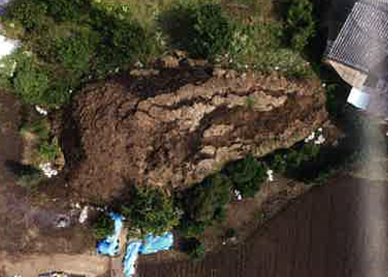 A large-scale fissure opened  in the mound. Further, dessication of the fill has progressed considerably, and the mound has been susceptible to collapse since shortly after the damage from the earthquake.

Case 4: Ishi no Muro Tomb (Kumamoto City, end of the fifth century, round mound)
The house-shaped sarcophagus of the burial facility collapsed. The lateral shaking from the earthquake, and the unstable structure of the sarcophagus itself are regarded as the reasons. Beginning with the Ishi no Muro tomb, fissures have appeared in the many of the mounds in the Historic Site Tsukawara Tomb Group. 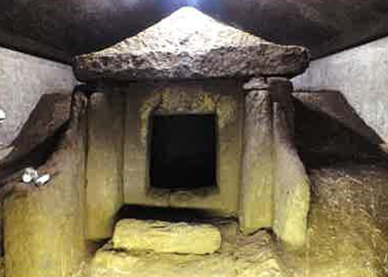 The sarcophagus of the Ishi no Muro tomb before the damage 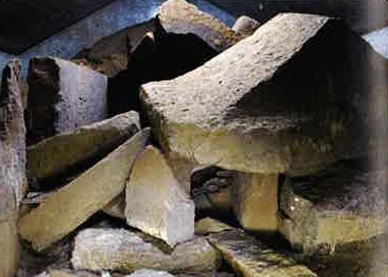 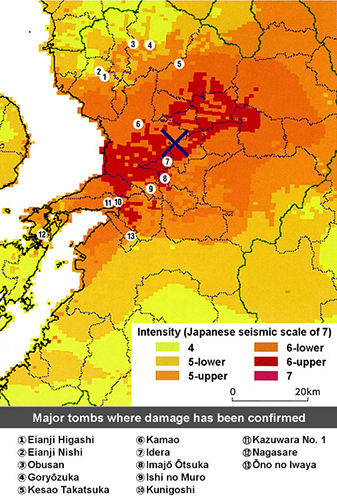 evel of intensity of the main tremor of April 16 and distribution of tombs
Tombs where damage was ascertained were struck with a strong tremor of 6-upper level intensity, or can be seen as lying in close proximity to fault lines. Also, many of the damaged tombs designated as Historic Sites are those with decorated chambers.  Adapted from Hakkutsu sareta Nihon rettō 2017 [Excavations in the Japanese Archipelago, 2017] (Bunkachō [Agency for Cultural Affairs], ed., Kyodo News, 2017). 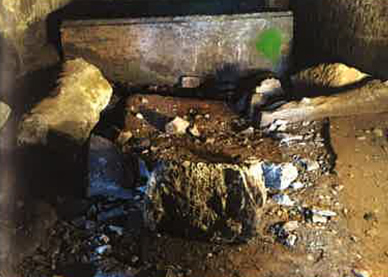 A considerable amount of material from the stones comprising the burial chamber has fallen down, and multiple fissures have been ascertained in the stones.

The 2016 Kumamoto earthquakes that struck in repetitive fashion in Kumamoto and Ōita prefectures from 14 April 2016, 9:26 pm onward, claimed the lives and property of a great many people. Beginning with the initial tremor on the 14th and that of 1:26 am on the 16th, both measuring at the maximum level of 7 on the Japanese seismic intensity scale, there were two 6-upper level and three 6-lower level quakes, with the total number of tremors of level 1 (perceptible to people indoors) or greater reaching 1,944 by 11 October 2016.
These earthquakes also inflicted great damage on cultural properties. In particular, the pathetic condition of Special Historic Site Kumamoto Castle shocked not only the citizens of Kumamoto prefecture but also many others in Japan and overseas. Additionally, Kumamoto prefecture is known as a region where tombs with decorated chamber walls are thickly distributed, and representative examples are designated as Historic Sites by the national and regional governments, but among these 17 tombs were confirmed as receiving some extent of damage.
At Historic Site Idera Tomb, located in the town of Kashima, the crumbling of some of the material from the stones forming the stone chamber, and large shifts in the arrangements of the stones, were made clear through filming the chamber interior by inserting a small camera in June 2016. The damage is very severe. Historic Site Kamao Tomb in the city of Kumamoto also had large amounts of dirt flowing into the passageway, and for that reason it continues to be impossible to enter the chamber. At the Historic Sites of Ōno no Iwaya Tomb in the town of Hikawa and Eianji Higashi Tomb in the city of Tamana, and at other tombs, flaking and falling stone material has been verified, and at Ishi no Muro, one of the tombs of Historic Site Tsukawara Tomb Group in the city of Kumamoto, the sarcophagus itself has collapsed.
At present, the Agency for Cultural Affairs, in coordination with Kumamoto prefecture and the local municipalities having tombs that suffered harm, has conducted a survey of the state of the damage to tombs with decorated chambers and is at the point of compiling the results, but it will still take some time before repair projects can begin.
Also, for the excavations held in conjunction with restoration and reconstruction work, and for the buried cultural properties survey attending the repair of Special Historic Site Kumamoto Castle, in response to an appeal made by the Agency for Cultural Affairs, nine cultural properties specialists from throughout the country have been dispatched to the city and prefecture of Kumamoto since April 2017. These personnel are engaged in tasks such as the excavations attending the rebuilding of private houses and other reconstruction projects.
Work towards restoration, reconstruction, and protecting buried cultural properties, is expected to be in full swing in the near future. (Ōmi Toshihide)