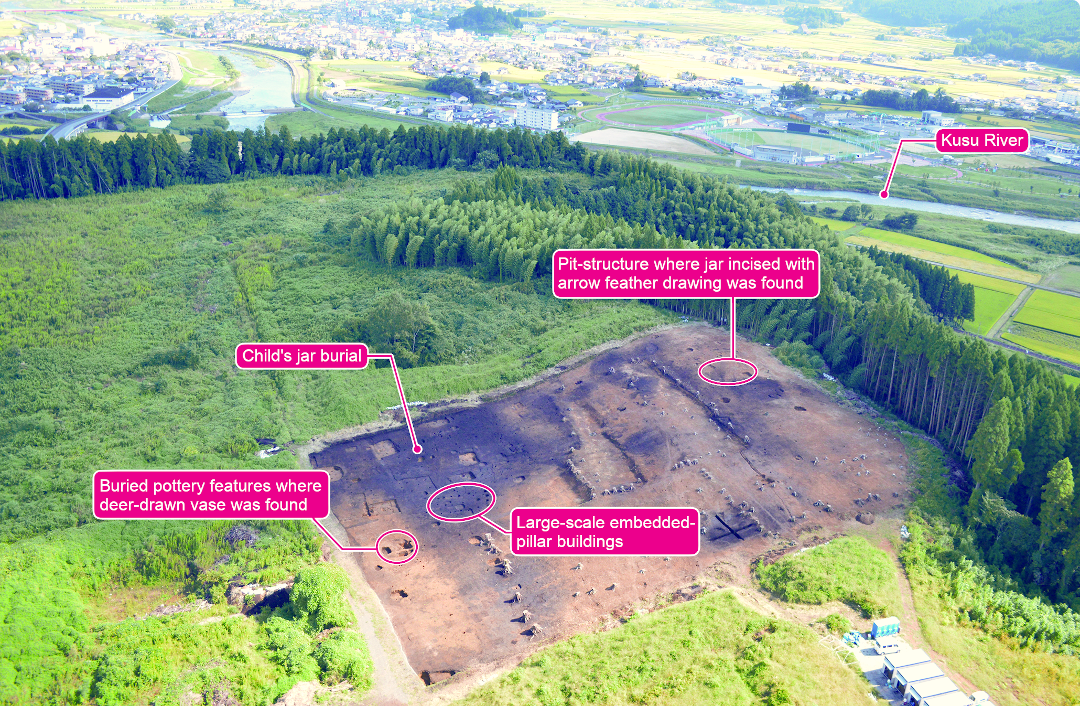 Distant view of the site (from the west)  Features detected in the 2016 fiscal year, the 15th season of excavations. Adapted from Hakkutsu sareta Nihon rettō 2021 [Excavations in the Japanese Archipelago, 2021] (Bunkachō [Agency for Cultural Affairs], ed., Kyodo News, 2021). 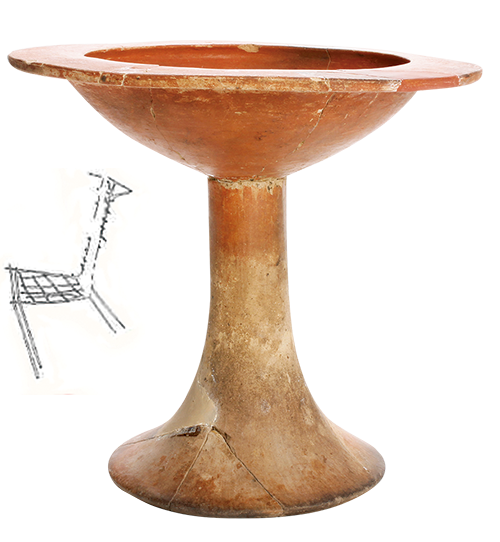 Pedestaled dish incised with a deer  A single animal is incised on the upper surface of the flat rim. The neck is longer than in images drawn on vases, but it shares the features of the head expressed with a triangle and the body covered with lines drawn diagonally or in a lattice design. 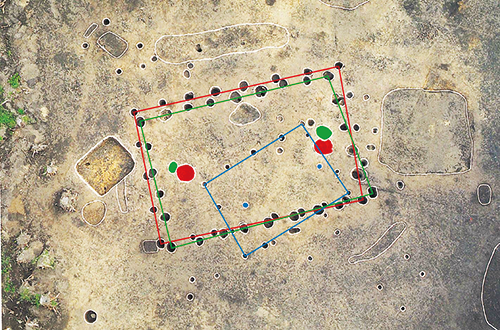 Buried pottery features  Red-painted jars vessel stands were buried in horizontally dug holes. It is thought that some form of ritual act was performed. A vase drawn with deer was also recovered.

Red-painted cylindrical vessel stand  Recovered from a pit in which items were collectively discarded.

The Yokkaichi site is located on a hilltop on the north side of the Kusu basin in the northwestern portion of Ōita Prefecture. In conjunction with the creation of an industrial park, excavation was carried out over a 16-year period from 2002–2017, covering an area of approximately 100,000 m2.

As the result of the investigation, approximately 150 pit-structures and large-scale embedded-pillar buildings of the latter half of the Middle Yayoi period, numerous pits, and graves such as a jar burial for a young child were found. Noteworthy among these is a group of 16 large-scale embedded-pillar buildings ranging up to 116 m2 in area discovered in the eastern half of the tableland. The latter half of the Middle Yayoi was a time when such large-scale buildings were prevalent, and in the northern part of Kyushu examples exceeding 100 m2 in area have been found at the Yubi Honmura site (Tosu City, Saga Prefecture) and elsewhere. Large-scale buildings are thought to have served as religious sanctuaries or as places of assembly, and such features are important for considering the nature of the Yokkaichi site.

Pottery is found incised with drawings in the shapes of deer, arrow feathers

Among the recovered artifacts is pottery of the latter half of the Middle Yayoi with incised drawings depicting deer and arrow feathers. Pottery with incised drawing is seen in abundance from the latter half of the Middle Yayoi centering in the Kinki region. People of the day are regarded as having conducted rituals related to agriculture with such incised pottery, in the belief that the vital force of the deer could bring about abundant harvests.

In addition to these items there was a variety of artifacts recovered at the Yokkaichi site, including a red-painted cylindrical vessel stand, a footed pot with a spout, jars, and clay comma-shaped beads. As points in common are seen with ceramics used in ritual in the northern portion of Kyushu, these are valuable materials for considering exchanges between the two regions.

There are Yayoi period settlement sites atop other tablelands in the vicinity of the Yokkaichi site. However, from the size of the plateau, and taking into consideration its  position in relation to the Kusu basin, the Yokkaichi tableland is the most advantageous for securing lands for wet-rice production, and this was almost certainly a core settlement for the Kusu River drainage.

But issues remain that require further examination, such as why over 100 pit-structures were in existence over only the extremely short span of the latter half of the Middle Yayoi, and also, why in this period there were no burials made atop the tableland of mature adults. (Matsumoto Yasuhiro)